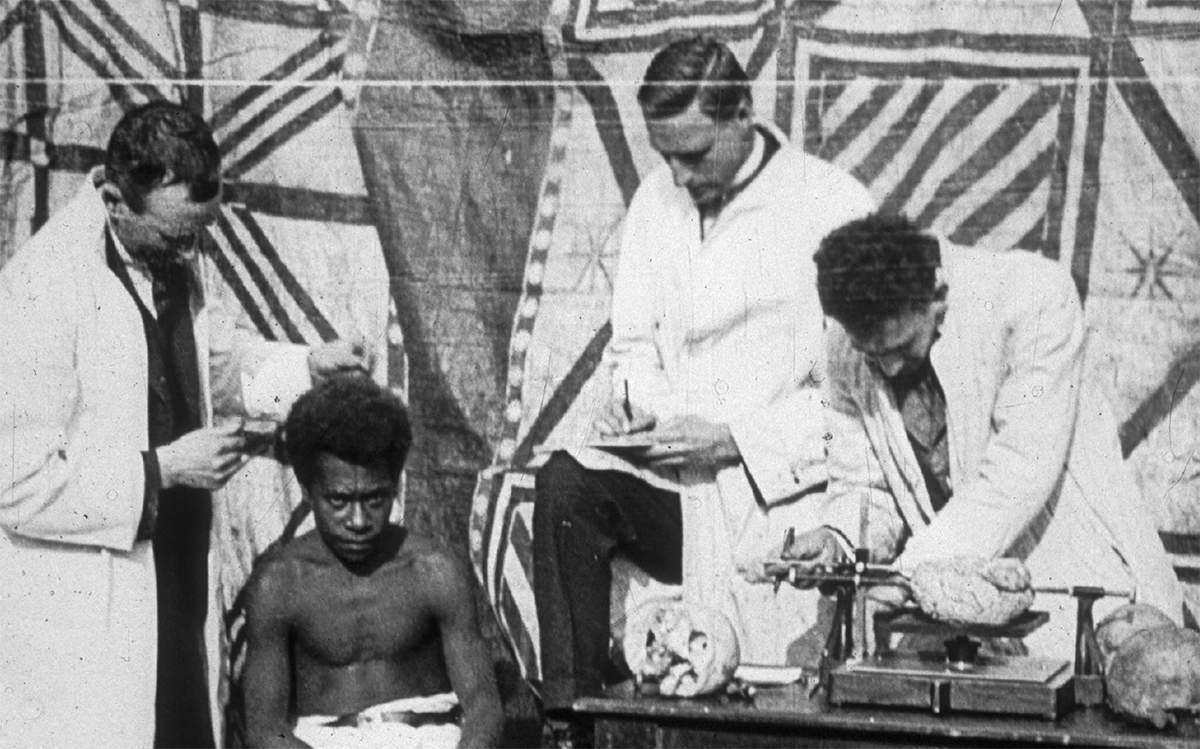 I attended a special screening of scholar, archivist, and curator Paolo Cherchi Usai’s Passio on 3 September 2006 at the Telluride Film Festival. This was the only screening in advance of its full Australian premiere on 23 February 2007 at the Adelaide Film Festival. A sort of pre-premier with recorded music rather than the required live performance of Arvo Pärt’s 1982 “Passio,” it was nevertheless, as silent film festival hounds like to say, a revelation. But it was not the kind of revelation I had expected. No precious lament of the decay of the medium, this seventy-four-minute film is the hardest-hitting, cruelest, and most affecting collection of sound and image this side of Buñuel. And it contains not one image of nitrate decay.

The first image we see is of a dead body, probably from a film of a concentration camp but, like every other archival image in this film, it does not fit into familiar paradigms. A skeletal, naked corpse of a man lies face up on the ground, arms and legs splayed out—the whole cadaver fills the screen. At the center of the image is the darkness that is the cadaver’s genitals. The horror hits us squarely between the eyes as sustained organ notes from Pärt’s stark, minimalist piece of music begins. Image and sound proclaim the suffering of the flesh as the film’s sustained first theme. Where can we possibly go from here?

The cadaver image fades, the title “Passio” remains, initiating a new motif—a thread of written text (the calligrapher is Brody Neuenschwander, who collaborated with Peter Greenaway on Prosperous Books [1991] and The Pillow Book [1996]), scrolling left to right, that will appear intermittently throughout the film. The words, which are the full title of Pärt’s music and the only (barely) legible words in the film apart from the title, read: “Domini Nostri Jesu Christi secundum Johannem.” As the sound dies out, pure darkness and silence follow. This, then, is where such a film can go: into spells of darkness, silence, and text abstracted into pure visual design that at intervals runs vertically, from bottom to top of the frame, ornamenting the periodic spells of darkness. If we could turn our head to the side and read Latin we might think we could follow the text. But the words go by too fast and are stylized to the point of illegibility. They punctuate the darkness and the silence with bright bursts of light—providing necessary respite in a film that might otherwise be too difficult to watch.

Enigmas of phenomenal life: a hairy leaf, a reptile and an inscrutable shadow

Calligraphy, Pärt’s music and its Latin singing, darkness, light, black-and-white or handcolored film footage—these are the elements of Passio. But the text is not meant to be easily deciphered and the music does not accompany the images. Rather it seems to call them forth. Nor do these images tell a story in any conventional way. Cherchi Usai’s minimalist “press book” describes the images as having “been chosen from the countless manifestations of our neglected or repressed collective memory, ranging from documents of political and racial oppression to scientific experiments, depictions of human suffering turned into mass spectacle and [to an archivist the greatest crime of all] the deliberate destruction of moving images.”

The art of Passio lies primarily in the choice and spacing of these richly various images. Many of them are like the opening shot of the cadaver: a horrific image of the suffering body in an unmistakable pose of crucifixion. Human suffering as spectacle for the impassive eye of the camera does prove to be a major theme. But, additionally, many images simply speak to the enigma of phenomenal life: the hairy texture of a leaf, the wiggling random movements of organisms under a microscope, a burst of handcolored red light in a night sky as two men walk toward the camera, a reptile and an inscrutable shadow, a woman who sits in a parlor reading a book as a nearly naked man wearing a penis sheath enters the room. There is no overarching thematic beyond what Jean-Louis Comolli has called the “frenzy of the visible” produced by myriad “machines of the visible”: microscopes, telescopes, cameras which bring the phenomenal world closer and closer. The moving images viewed by these machines might be clear or scratched, black and white, tinted or in color; they might be microscopic or macroscopic, but they all invite our fascinated or horrified stare.

This machinic stare at the “frenzy of the visible” is often augmented by a gesture, notably a redundant pointing. The second shot after the cadaver is of a finger indicating the hieroglyphs of the Rosetta stone. A white finger points to a mystery of the past, the mystery of the scientifically isolatable “other.” Typically, white male experts point while women or people of color writhe, convulse, or just hold still to be examined or measured. In one sequence a black man’s skull is measured by three white-coated scientists. Human fingers or metal implements isolate the part of the image at which we are invited to stare. A pointer traces the outline of a scar on a human torso, on the areola of a woman’s breast, and the little penis of what looks like a skinned dog. In another, more theatrical kind of pointing a Méliès-like magician enthusiastically dismembers a woman and points proudly to his work. One long sequence shows a turn-of-century medical professional manipulating the limbs of a supine and naked epileptic man, the better for the camera to view his agonizing and seemingly endless convulsions. Another shows two bearded Victorian doctors induce the hysterical convulsions of a clothed woman. Manipulation, measurement, pointing, cutting open—these are the irreducible gestures of a medium caught up in a medico-scientific relation to the human and animal body.

The only touch that is not part of this medico-scientific manipulation and measuring occurs when a man and woman kiss. Later this image is viewed on a strip of film that is scraped and spliced. Film is handled, pointed to, and cut in ways analogous to an autopsy, open heart surgery, and an excruciating eye operation in which something is scraped out of a cornea and the incision is sutured. Film becomes body, body becomes film. A black spool of film is pulled from a can and displayed in much the same way as vulnerable organs are displayed; emulsion is scraped from the image of the kiss so it can be spliced by the same kind of knife that cuts the eye. A meditation on cinematic embodiment that often seems to treat film stock more lovingly than the human body, Passio is Comolli’s “frenzy of the visible” rendered self-reflexive.

Fingers point at fingers and film is displayed

If the film’s first image is of death, its last is of birth. But it is not the familiar birth from Man with a Movie Camera (1929). Nor does this baby emerge from the womb as an obvious figure of hope and renewal as one might expect against the background of the “good news” of the gospel which inspires Pärt’s music. Rather, the action runs in reverse: the baby is tucked back into the womb following the familiar numbers of the cinematic reverse countdown. This baby seems to know what the film has revealed: this is not a world into which one would want to be born. In between these bookends of death and life, destruction and creation, cruel manipulation and simple wonder, a rhythm of images pulses: beautiful, mysterious, horrible, and true.

Bruce Conner’s A Movie (1958) overwhelms us with accumulated montages of fictional and real filmed catastrophe, Godfrey Reggio’s “Quatsi” films (1982, 1988, 2002) bludgeon us with apocalyptic portents, Peter Delpeut’s Lyrical Nitrate (1991) infuses us with nostalgia for the lost past, and Bill Morrison’s Decasia (2002) connects its images of impending doom and nitrate decay to psychedelic abstractions. Cherchi Usai’s Passio joins the tradition of these earlier works most of which were created out of pre-existing footage. But it also differs from them. Its celebration-accusation of the “machines of the visible” goes deeper, its connection to its music is more profound, with Pärt’s stark and simple oratorio prompting the images rather than underscoring them. Nor is this a statement constructed out of an arbitrary grouping of images just found in some attic. These are images treasured and cared for by a knowing archivist who “plays” them like the notes of Pärt’s oratorio. We are neither bludgeoned by sensory overload, nor offered an easy nostalgia. Though we are compelled to give the film our rapt attention, this attention pays off; it has breathing space built into it. We are given time to assimilate what we have seen and to anticipate (or dread) what may come next. Darkness, silence, and the beautiful abstract lines of the stark white calligraphy provide time for both reflection and affection.

Cherchi Usai has set a high bar for the exhibition of his film. Unless other venues beyond Adelaide can provide not only baritone and tenor soloists, but also a quartet of soprano, alto, tenor, and bass together with a choir of 12–15 other singers, plus the organist, violinist, oboist, cellist, bassoonist, and conductor required by Pärt’s score, and unless they can provide 35mm projectors equipped with silent-sized aperture, the film may not be shown elsewhere. Cherchi Usai insists that hereafter the film be screened with live orchestral music. Like every other silent film, only more so, music gives it a special liveness. Passio is a work of convulsive beauty. It richly deserves more than one day in the sun.

LINDA WILLIAMS teaches in Film Studies and Rhetoric at the University of California, Berkeley.