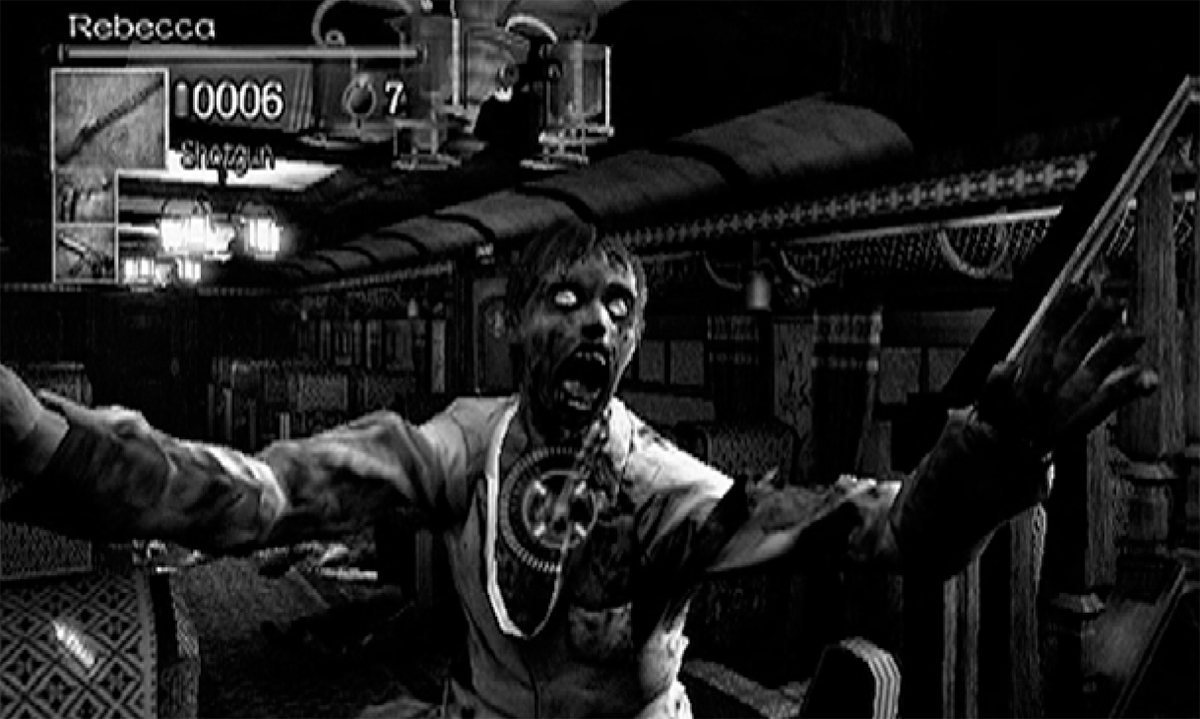 “Survival horror” is a highly popular genre of video games that takes its cue from horror cinema but modifies the experience, exploiting both fear and the urge to fight back. The term itself originated with the game Resident Evil (1996). Inspired in part by George A. Romero’s Living Dead series of films, the loading screen of Resident Evil invited players to “[e]nter the world of survival horror,” where destroying or eluding bloodthirsty zombies is the order of the day. Hugely successful, the Resident Evil franchise now encompasses not only three sequels and several spin-offs, but also a trio of feature films (most recently the 2007 Resident Evil: Extinction) that have a game-like structure: the heroine advances from battle to battle against increasingly formidable opponents.

As the video-game genre most tightly linked to a cinematic tradition, survival horror upsets some of the assumed differences between cinema and games. At its most basic, the difference is that cinema spectators just watch (or cower), while gamers actively manipulate the action. As the “survival” tag suggests, an aggressive agency is involved in these games: the emphasis is not on the traumatizing dimensions of fear and violence, but on the hero’s perseverance — and sheer brutality—in the face of relentless enemies and seemingly overwhelming odds. Survival horror draws on the reflex-activating power of fear rather than paralyzed gawking. It is a feature of these games that the protagonists are typically not brawny commandos, but rather ordinary people, often women, armed with scavenged weapons such as knives, lead pipes, and pistols that have only limited ammunition. The games involve endurance and cunning as much as militarystyle marksmanship or physical strength. Although they are graphically violent, rewarding players with gory sequences in which knives slash through zombie flesh or shotguns explode zombie heads, survival-horror games also frequently require players to run or hide, avoiding combat, in order to make it to the next level.

Horror spectators in cinemas will sometimes impotently call out warnings (“Don’t open the door!”) to on-screen protagonists. In survival-horror games the urge to intervene, to take control, is enabled: the player can alter the outcome of the grisly screen scenario. In order to do so, however, gamers are obliged to actively investigate the most frightening areas of the game. Unlike many popular video games (such as the Grand Theft Auto and Halo series) that afford 360-degree views of vast, exquisitely textured landscapes that are open for free-roaming exploration, survival-horror games typically confine players in dark, claustrophobic interiors. Furthermore, the framing of these environments, as in horror cinema, is often restricted. Off-screen space becomes an out-of-reach source of dread and danger. Curiosity and investigation, which are so often deadly in the plots of horror films, are essential in these games.

First-person shooters in which looking is the same as targeting and simulation games that allow a God’s-eye view render visible space rational, continuous, and fully actionable. But in survival-horror games such as the Fatal Frame series (2001, 2003, 2005) and Eternal Darkness: Sanity’s Requiem (2002), looking is uncertain, partial, always involving a measure of powerlessness. The game environment is from the start feebly lit and mist-shrouded; and visibility is further circumscribed by the fact that as the player moves, the game viewpoint switches without warning from one fixed and limited vantage point to another. There is no way to fully survey the environment. Players must infer what is missing from a series of third-person shots, stitching together a more comprehensive view. So, rather than gliding into a room toward a cabinet in the corner in a single continuous shot, you first see the doorway to the room from an exterior perspective, then cut to a long shot of one side of the room’s interior as you enter, and then cut to another, medium shot of the cabinet as you approach it—a version of cinema-style montage that can be awkward and jarring in a video game. Although the player directs the character’s movement through the labyrinthine space, the game determines each (restricted) view of the scene. Therefore you may not be allowed to see the zombie crouched in a blind spot in the room’s far corner. As in horror cinema, a sense of paranoia unsettles every step forward. Navigating through the game becomes a highly anxious experience; the gameplay is hesitant rather than fluid and assertive.

In Fatal Frame vision is fearful not commanding. This is especially so because, rather than any weapon, the game’s young female protagonist carries only an ancient camera (called a “Camera Obscura”) that exorcizes attacking ghosts by capturing them on film. The tighter you frame your target, the more effective your counter-attack, but the more blind you are to your immediate surroundings. Ghosts slip in and out of your camera’s viewfinder to reappear directly beside you but beyond the camera’s range of vision. Although getting a close-up of a hideously deformed wraith just as its pale arms reach for your neck will enable you to destroy it, it also makes for a harrowing face-to-face encounter. Unlike in a horror film, you cannot simply cover your eyes. Eternal Darkness goes even further in impairing the player’s ability to master the game environment. At one point in the game, just as zombies begin to swarm around your character’s avatar, the game disables all controller commands and flashes a simulated-but-very-convincing error message that the game controller has been disconnected. You fiddle with the console cables in a panic, watching helplessly while your debilitated character is pounced on and killed. With this fourth-wall-breaking trick, Eternal Darkness brings gaming closer to the cinema spectator’s powerless horror at on-screen carnage.

Although it is abundant in other video-game genres, the first-person perspective is not found much in survival horror. In addition to providing an expansive and empowering form of vision that is antithetical to the surrender of visibility and control central to the horror experience, the frequent use of a subjective camera to represent a killer’s viewpoint in cinematic horror is not possible in survival-horror games (although one could imagine a game where the protagonist is a homicidal zombie, it would be hard to square this with the key element of an ordinary protagonist in peril). However, the recent spin-off game for the Nintendo Wii, Resident Evil: Umbrella Chronicles (2007), is a first-person shooter that transforms the Wii remote into a gun that you use to target on-screen monsters. The unbroken fluidity of the first-person camera combined with the accuracy of the Wii remote’s aim offer the player an unprecedented ease and efficiency of movement. Yet this more responsive and intuitive new controller design comes at a price. There is much less disorientation and terror. We are no longer entirely in the world of survival horror where our bodily cues for distress and pleasure are scrambled, and where the circuit between vision, intention, and action is always at risk of being broken.

IRENE CHIEN is a Ph.D. candidate in Film Studies and New Media at the University of California, Berkeley.