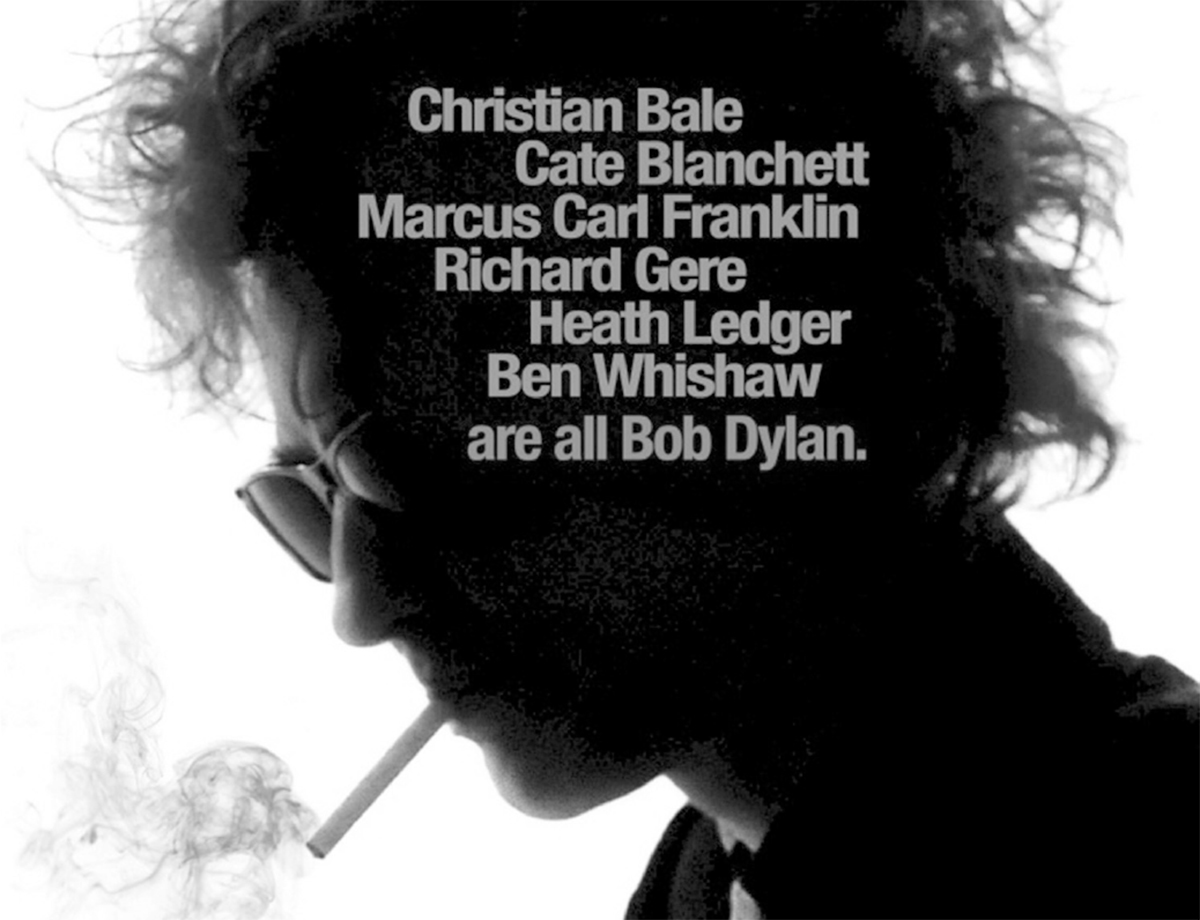 I’m Not There (Todd Haynes, 2007) is an entrancing movie. Cate Blanchett is a fine actor. As one of the six Dylans—“Jude Quinn,” the star at his shimmering, recalcitrant zenith—Blanchett hazards a daring performance, peaking in the Fellini-dreaming encounter with David Cross’s Allen Ginsberg.

Nonetheless, the critical unanimity about Blanchett’s achievement is puzzling. She struggles. She veers closer to impersonation than invention, sometimes labored, and her simulacral voice warps and frays half-down the tenor range. She holds the screen largely because Haynes keeps her camera-center. By comparison, Charlotte Gainsbourg, playing Suze Rotolo/Sarah Dylan/Sad Eyed Lady of the Lowlands, is riveting and absolute even as she stays within herself at the side of the screen, leaving her scene partner Heath Ledger plenty of space to extend his charms.

What are the stakes of this insistently repeated misjudgment? Well, she ain’t bad. And the caricatural cineaste of the New Yorker demographic—white middlebrow male, lived through the nouvelle vague—goes Pavlovian over women from the former British Empire who do classy-sexy: Blanchett, Thompson, Scott-Davies, Mirren, Swinton, Winslet, and when Gwyneth puts on the accent … you get the picture.

Perhaps it’s the relief at being able to displace the hots for the historical Bobby onto a woman’s body (much as Carrie-Anne Moss, caulked, coiffed, and costumed to resemble her Matrix [Andy and Larry Wachowski, 1999] co-star, served as a convenient diversion for boys who felt bad about feeling good about Keanu).

But one also catches a whiff of self-congratulation to which the stunt-casting is insightfully attuned: we all feel so cool about being down with the gender play, so open-minded and progressive (indeed, there is another column to be written about the extent to which, in casting Dylan as a woman, a young black male, and a bunch of white guys who are still fundamentally identical, Haynes has made a film of this year’s Democratic presidential primaries). This sensibility is finally annoying, both because it reminds us that the anxiety endures after all, but also because there are few spectacles as unwholesome as liberals flattering themselves. This critical reception doesn’t make I’m Not There a lesser film, just a less-pleasant social fact.

Indeed, it may make it a better film, for the nuance with which it courts and confounds its target audience. “Self-congratulatory progressives” should give the game away. Of course the film is instantly beloved by the cultural guard, which is practically defined by taking Dylan for an epochal figure. But at the same time, the possibility that Bobby could be reduced to biopic must be disavowed: “This is not a Bob Dylan movie” was a New York Times title, sentiment widespread.

But it is. In its insistence on cracking one character into the six names of Woody, Arthur, Jack, Robbie, Jude, and Billy the Kid, I’m Not There strikes at the heart of Dylan. He knew a secret and was unequaled in its martial application: as soon as you name yourself—the second you agree to be any one thing—you’re a butterfly on a board. Even if you’ve selected the stick-pin yourself, and gotten a million bucks for choosing. So Dylan wouldn’t say his own name, even if it meant being an asshole; Don’t Look Back (D. A. Pennebaker, 1967) is about this and nothing else, which distinguishes it from the fascinating but less-charged No Direction Home: Bob Dylan (Martin Scorsese, 2005).

I’m Not There is an artistic capture of Dylan’s escape artistry; this is an ambiguous achievement. The man gets his due, and the casting of Blanchett (and Marcus Carl Franklin) serves at satisfying confirmation that we are all Dylan. At the same time, Dylan’s meaning must remain up for grabs, possibility-filled; to strike at his mystery, even with a nuanced coup, risks fixing him in place, making him finite. This is intolerably threatening to a pathologically over-identified generation, whose recent delusion of Dylan’s recovered genius is largely a bedtime story it would like to believe about itself.

While the movie participates in flattering its audience, it has more incisive moments. Its Dylan comes to an end right around the time that the demographic leviathan known as Boomer was trading its political birthright for the pottage of cultural satisfactions. Whereupon the film exits the actual doings of history, and slips into its mythic world-out-of-time. This fantasy is rather the film’s moment of truth—not just about the end of Dylan’s power, but about a generation’s politics. We’re Not There: history goes on, but without us, who abandoned the possibilities of change. It’s harder to imagine the end of Dylan than his endless renewal, but I’m Not There manages to do both by finding a trapdoor in history itself.

Envisioning a more comprehensive culmination still, I Am Legend (Francis Lawrence, 2007) is the third pass at the Richard Matheson book; it’s almost as good as the second, The Omega Man (Boris Sagal, 1971). In that version, lead character Robert Neville was played by Charlton Heston.

This one concludes quite differently, and both diverge from the book, but each has its satisfactions and terrors. Since we’re puzzling over the blind spots of critical response: it has gone without comment that, in pitting Last Man Alive Will Smith against an army of albino humanoids, the long first act is basically Kill Whitey. One wonders what Charlton Heston would make of that.

Still, there’s a clear continuity between the two actors. A born politico just marking time and money in Hollywood, Smith is a Heston for Democrats.

Another thing the two Nevilles share is a taste for post-Impressionists. The Omega Man has a background Van Gogh; Smith’s Washington Park townhouse adds another, and a Rousseau—presumably “salvaged” from the MoMA after the apocalyptic viral freakout.

Art rescued from civilization’s collapse—it’s an odd little clump of meaning. Julia Kristeva called such a thing an “ideologeme”: the smallest kernel capable of bearing ideological conflict. If this particular ideologeme has a history, it has also seen a recent blossoming. Beyond I Am Legend, it also shows up in V for Vendetta (James McTeigue, 2005) and Children of Men (Alfonso Cuaron, 2006), to name a couple. An implausible recurrence for such a minor gesture, it’s starting to feel like the name “Nina” concealed in all those Al Hirschfeld cartoons. What do those squirreled-away artworks mean?

Perhaps it’s just whistling in the dark of Philistine armies, a kind of counter to the comedy stylings of Donald Rumsfeld: “The images you are seeing on television you are seeing over, and over, and over, and it’s the same picture of some person walking out of some building with a vase, and you see it 20 times, and you think, ‘My goodness, were there that many vases? Is it possible that there were that many vases in the whole country?’”

But the context of these films somehow makes the oddity more vexing than a simple index of the current war, highlighting as it does not just preservation or looting, but a sort of aesthetic delectation. Why do these artworks keep floating unexplained in the background of futuristic scenarios where the system has broken down?

Another way to phrase the question might be, what’s culture’s fate when exchange value has exited the stage? Would we still want The Starry Night or van Eyck’s Arnolfini portrait if there was no market or museum to guarantee its wonder?

It’s the kind of revolutionary proposition generation Boomer abandoned: the question of revolution is the question of imagining a world where pleasures are uncoupled from market value. In this small ideologeme, we might suggest that I Am Legend and its cohort are trying to imagine this very situation. In so doing, they leap farther and in the opposite direction than I’m Not There’s flight into a mythic past. “It is easier to imagine the end of the world than the end of capitalism” (often credited to Fredric Jameson, though he says otherwise). These films seem willing to imagine the latter, but find it impossible without the former. There’s no way out but apocalypse.