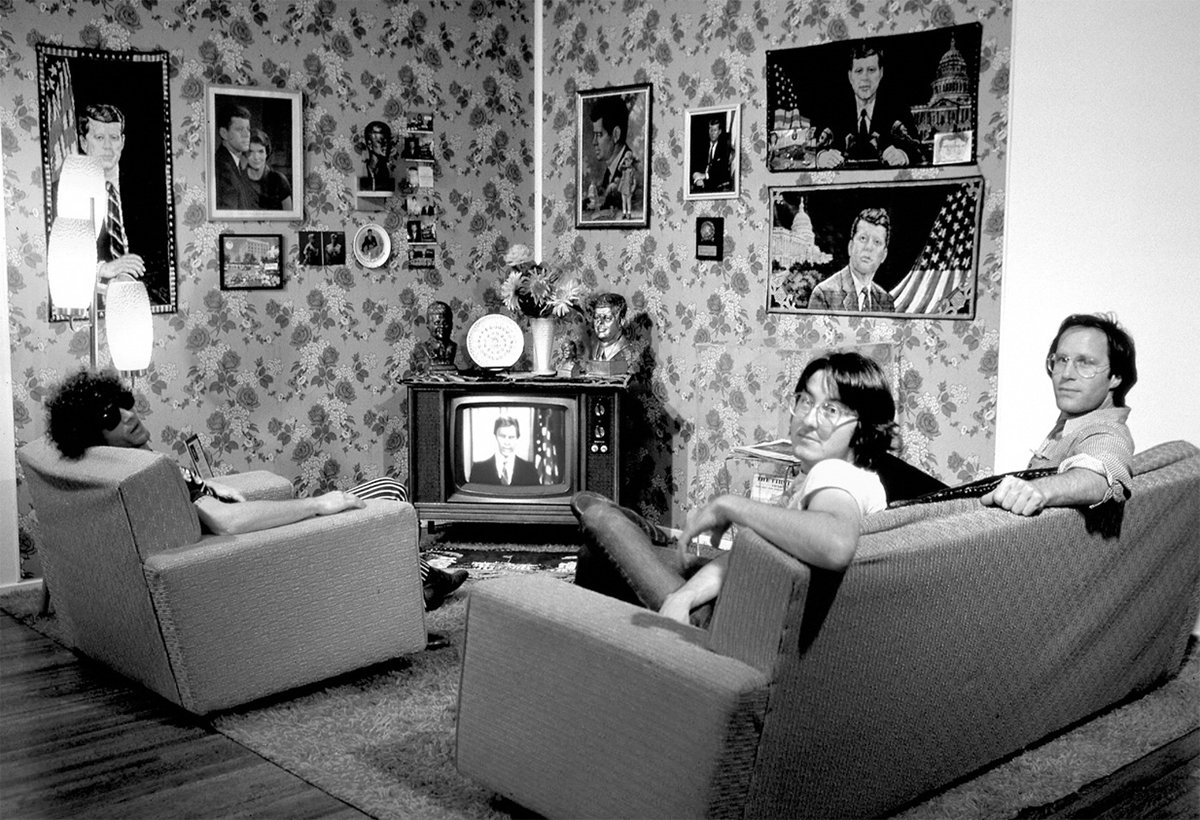 The “California Video: Artists and Histories” show, curated by Glenn Phillips, opened at the Getty Research Institute in Los Angeles on 15 March 2008, running through 8 June. Ambitious in its scope, it features the works, all made during periods when they were based in California, of fifty-eight individual artists and collaboratives. At its portal, one first encounters John Baldessari’s 1971 videotape, “I Will Not Make Any More Boring Art.” Shot on an early Portapak, the piece shows the artist simulating a school punishment by repeatedly handwriting the statement for the duration of the roll of tape. Most people glance at it, get the joke, move on. Which, reflecting the deadpan “duh” on which it pivots, is about right. Seasoned viewers, on the other hand, may spend more time there, pondering the art-historical significance of Baldessari’s translation to video of his immediately prior reflexive conceptual paintings of texts—of, for example, the words “THIS IS NOT TO BE LOOKED AT”—many of them now freshly installed at Eli Broad’s new museum just across town. Or, lacking this specialist knowledge, visitors may contemplate the various forms of physicality contained in the video: the visual texture of the image itself, the awkward arrangement of the artist’s forearm across the screen as he accommodates his left-handedness to his task, or the temporal effects of the simple repetition by which the performance seems simultaneously to contradict his stated intent and to imbue it with a compelling fascination.

In any case, the visitor will eventually move on to the next piece, Diana Thater’s Continuous Only (2006). Instead of on a funky old period Sony TV set, this exists as nine large black-framed screens flat on the wall, gleaming and sexy. The imagery pans through rich, semi-tropical foliage providing an intensely sensual visuality of the kind until recently more familiar on film than on video: one recalls Stan Brakhage’s “How many colors are there in a field of grass to the crawling baby unaware of ‘Green?’” The unseen technology producing the images coordinates the camera-motion and the imagery, so that the whole appears to be a single huge screen somewhere behind the wall, with the monitors serving as holes through which a natural yet glamorous spectacle can be observed.

Succinctly then, in its first two steps, the exhibition establishes persuasive parameters for an analysis of avant-garde video’s historical evolution: across the thirty-five years between 1971 and 2006, low tech confronts high tech, male looks at female, a bemused but rigorous conceptualism gives way to a gorgeous conceptual vacuity, modernism is displaced by postmodernism. Such a framing would indeed have sustained a viable narrative for the whole show, but instead of relaxing into it, the exhibition immediately introduces an even wider analytic context.

The next item is a recreation of an early 1950s domestic drawing room, decorated with kitsch JFK tapestries and other memorabilia and a glorious orange shag rug, all focused on a console playing The Eternal Frame (1975), T. R. Uthco and the Ant Farm’s re-enactment of the Kennedy assassination. Sitting on the couch, one watches the charade in all its tacky dissimulation: spectators on the grassy knoll applauding as the fake bullets hit home and Doug Michels’s Jackie looking like a drag queen sprawled across the death-car’s trunk. Invoking the home rather than the museum, the installation foregrounds issues the first two had subordinated: the mass-cultural uses of the television technology and the social spatiality of its reception. But no sooner have all the implications of commercial broadcast been introduced into the mix and conceptually reconstructed than the design of the exhibition again expands the critical contexts in the adjacent recreation of an installation. Bruce Nauman’s Video Surveillance Piece (Public Room, Private Room) (1969/70) constructs a series of visual and ontological contradictions between a surveillance camera, the corresponding monitor, and the spectator’s presence in the surveilled space. It too is about the spatiality of perception, but rather than opening up to politics and the public world, it is hermetically reflexive.

And so the show unfolds, each step through it revealing an expanding spiral of the multiple innovations video has engendered in its short history. Generally the arrangement moves one through examples of single-channel video produced or preserved at the Long Beach Museum of Art (whose extensive collection the Getty purchased and which forms the core of the present exhibition) and into larger, more recent and elaborate installations. Everyone’s itinerary will be idiosyncratic. For me the high points spanned punk confron-tationalism in the vein of Joe Rees’s Target Video 77 (c. 197780), a selection of early, but distinctly non-corporate music videos and the meditational sublimity of Paul Kos’s Chartres Bleu (1983–86).

Watching Jello Biafra singing “Holiday in Cambodia” is one thing, even with the fortuitous echoes of the other Dead Kennedys in the previous room; but then to see the Mutants performing at a school for the deaf with a signer translating the singer and the kids signing to each other while playing air guitar is something else. But even that is aced by the Crimes, hair greased like Johnny Cash, all dressed in black police uniforms singing in the San Quentin prison yard while the guntoting guards patrolled the barbed-wire perimeter and the muscled cons waved fliers. Chartres Bleu, on the other hand, is a sculptural assemblage of twenty-seven monitors that replicates one of the Gothic windows of Chartres Cathedral. Over the course of twelve minutes the glorious stained-glass colors fade to night. But as they do so, they turn into twenty-seven mirrors reflecting the work on the opposite side of the room: twenty-seven little frames of a Buddha touring the American freeways on the back of a truck (Euan Macdonald’s SCLPTR [2003]) and next to them twenty-seven little frames of a tough-looking chick whacking weeds on an empty L.A. lot (Harry Dodge and Stanya Kahn’s Whacker [2005]).

Midway between these, there’s a study lounge where all the Research Center’s holdings are accessible on individual monitors. Reminiscent of the animals categorized in Borges’s “Chinese Encyclopedia,” available are Northern California (29 tapes), Southern California (66), Politics (25), The Body (27), California Stories (18), Signal Distortion (16), and Under Five Minutes (22). The irregular list neatly illustrates the combination of geographical, ideological, and technical considerations that the exhibition attempts to reconcile.

There are, inevitably, important omissions. That of Joan Logue results in the loss of the L.A. origins of video portraiture. The extensive video work of Harry Gamboa Jr. (omitted) is surely more significant than that of the Harrys Kipper (featured prominently). And the omission of all the work produced by the first and most important Asian American community arts organization, L.A.’s Visual Communications reflects an aestheticism (and an ethno-centricism) that skews the medium’s historical usages. Omissions such as these are not simply incidental, but also the other side of a missing curatorial decisiveness, especially around issues of value, aesthetic, historical, political, length (“under five minutes”), or however it could be asserted or clarified. By being on the one hand indiscriminately ecumenical and on the other extremely partial, the montage of the Getty’s attractions loses these questions in a giddy euphoria. Instead of analysis, it creates a circus-like exhilaration. On one of the days I visited, this was intensified by a Family Festival for Latina/o schoolchildren hosted by the Getty. As Oaxacan music filtered into the show, gaggles of excited teenagers were, perhaps for the first time, discovering the pleasures of gallery art.

I did not always agree with the curatorial decisions of “California Video,” but there is no question that the show works admirably and compellingly as a smorgasbord, even a cornucopia. I hope the Getty will build on this success and mount something similar for the even more important (and more neglected) history of avant-garde film in California.

DAVID E. JAMES’s most recent book is The Most Typical Avant-Garde: History and Geography of Minor Cinemas in Los Angeles (University of California Press, 2005).