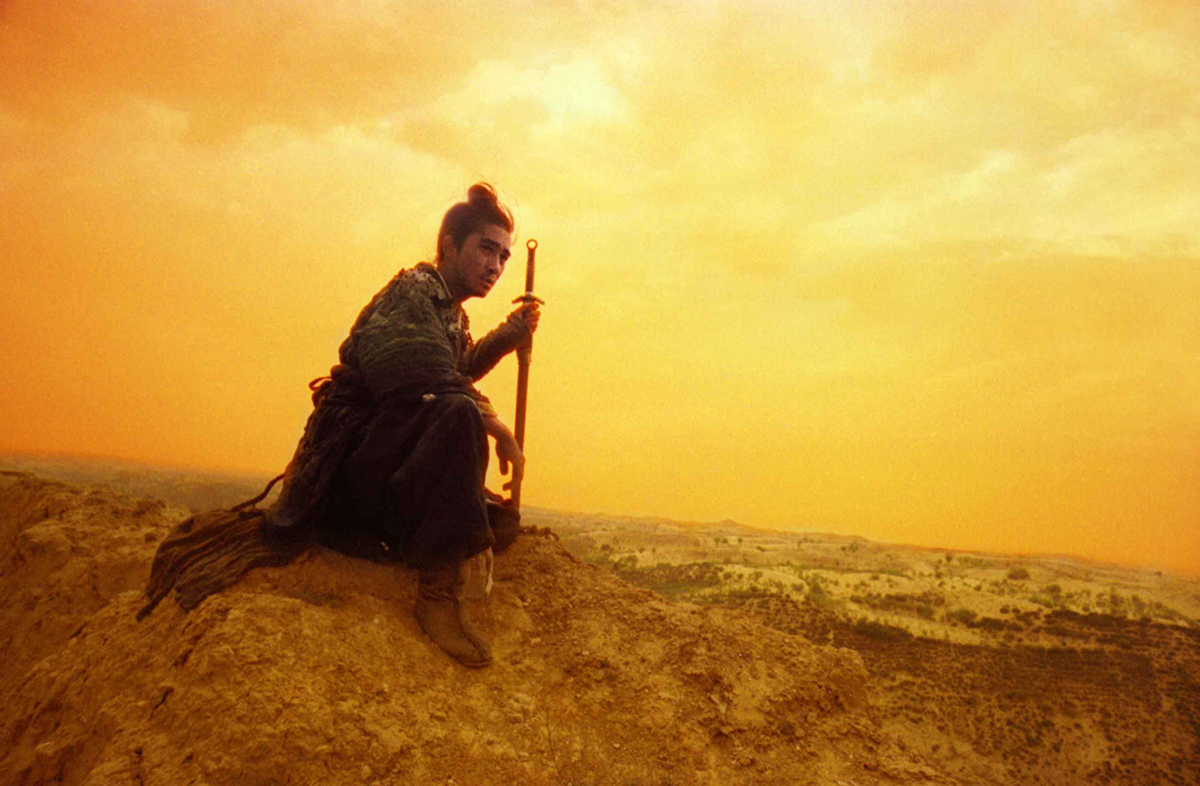 Attending film festivals involves a kind of ideological whiplash even more intense than does being a regular cinemagoer, if only because the contradictions are more compressed in space and time. The New York Film Festival’s promotional trailer, shown before every screening, says it all. Various famous phrases about the movies pivot in and out of view, mod typeface purling everywhere, beginning and ending with Godard. And then comes the tag: “Indescribable. Unparalleled. Magic.” Wait, what? Didn’t we just get a dozen terrific descriptions? But cognitive dissonance isn’t just an accident, it’s the order of the day.

Neither of the Godard quotes is the one which gives this column its name: “This film could be called ‘the children of Marx and Coca-Cola.’” Nor did they manage to conjure his great demand: “Let the images flow faster than the money does!” The demarxifying of Godard is an allegory for the history of modern cinema, and for the film festival itself. If one believes in anything political, social, or artistic, it is certain to be contradicted within a few minutes. Just in order to take it all in, one is sorely tempted to believe in nothing but “cinema,” beyond description — ambling from screening to screening in a haze of sensual distraction.

This year’s NYFF had the good fortune to host the American cinematic debut of Guy Debord’s 1978 film with the palindromic title In girum imus nocte et consumimur igni (which translates roughly as “we whirl in the night and are consumed by fire”). Long pulled from circulation, it has resurfaced—freshly subtitled—to lead the festival’s “Views from the Avant-Garde” showcase. This was only appropriate, as the film is in large part an impossibly elegiac circling back through time to the last meaningful avant-garde, that advance cadre of conspirators and drunkards known as the Situationist International. “A group of people,” the film elaborates without embarrassment, determined to “base its real existence on a deliberate rejection of what is universally accepted, and on total indifference to the possible consequences.”

The consequences were mostly devastating, the successes at least as much as the failures. The film offers up the history as a quest played out across Paris and western Europe, across years and across the imagescape.

Prince Valiant appears briefly, as well as Lacenaire from Children of Paradise—a film shot heroically in a Nazi-held Paris. That’s part of the claim: that the avant-garde, whether artists or militants or both, fights always within an occupied city—occupied if not by armies than by the alien beast of capital.

But the images do not flow very fast at all, and that is the point. The film is largely found footage, both moving and stilled, frozen, spooled out patiently and even blankly. There are newspaper ads for modern living, and great swaths from The Charge of the Light Brigade, and an impossibly calm circumnavigation of Venice. Images, the film seems to gather, are merely a form of value; they can no more “flow faster than the money” than clouds can flow faster than wind. And so careful efforts are made to detach the images and the words from the torrent, and to make the detritus of history tell a different story, something that “begins with a game” and ends with a terrible charge into the cannonades of time and domination. “Avant-gardes have only one time; and the best thing that can happen to them is to have enlivened their time without outliving it,” murmurs Debord, who killed himself in 1994. Such a pure insistence is foolhardy, and lacking in humility, and uncompromising in a way we all secretly wish to be, in a way that gives definition to the initial concept. In girum requires us to use the term avantgarde like we mean it.

And then one walks out into the festival and lands in the historic, luscious seats of the Ziegfeld Theatre, where Frank O’Hara used to buy his smokes in the lobby. Was he the avant-garde? What would he have made of Changeling, which filled the Ziegfeld more than once during its premier run? He was a big Lana Turner fan; maybe he would have appreciated Angelina Jolie’s wave, and the lipstick apparently made from ground rubies and greasepaint.

Jolie plays a single mother in interwar Los Angeles who loses her son, is burdened briefly with a fake son by the cops, and spends the rest of the movie demanding justice and searching for her kid. Based on actual events or not, the plot is silly enough to obviate further detailing. One supposes it could be written off as chumming for an Oscar: Jolie returns to the psych ward, in a turn begging the title Mom, Interrupted. Indeed, the movie’s most generous quality is in reminding one of half-remembered films worth revisiting: Devil in a Blue Dress, for its old L.A. set designs; L.A. Confidential, for its interest in crooked cops and crazed killers as something more than decoration for moralizing; and They Shoot Horses, Don’t They? for taking despair seriously.

If there is anything awe-inspiring about Changeling itself (aside from the lipstick) it lies in its one-dimensionality. As has become the hallmark of post-2001 cinema, a child in jeopardy is the only guarantor of significance, and everything spreads outward from there. Cops bad, moms good; politicians bad, crusading preacher good — though John Malkovich can’t help himself and renders up just a twitch of ambiguity, which must have driven the director crazy, since nuance is not his strong suit.

One should dispute the saintly status Clint Eastwood has somehow achieved among critics. High plains populist he may be, but of a most unpleasant variety, as far to the right as the last century’s worst examples: die rather than let the state do for you, sacrifice yourself for the president, etc. In his oscillating cult of heroic individual and supreme leader, Eastwood is closer to Mussolini than Frank Capra. That reaches toward the core of the problem: it is not a particularly cinematic vision, just an unpleasant dogma that flattens human experience far more than the average Hollywood entertainment. And so in Changeling we get a moral universe populated by heroic moms and victimized waifs who must at all costs not depend upon the social order, rifted as it is with weakness and corruption; they must do it themselves, with occasional support from faith-larded vigilantes (the real-life Gustav Briegleb, Malkovich’s character, was said to be in the pay of the libertarian Better America Federation). The whole thing gives hokum a bad name.

If festival whiplash is confusing, at least there is always a palate-cleanser forthcoming, or more accurately an eyewash. Wong Kar-wai’s remix of his 1994 Ashes of Time is so comely to look at that it’s like growing new eyes. The narrative is all Wong—a meditation on time and memory with events out of sequence and faculties unable to put them in order, as true for the characters as for us. Everyone’s beautiful and romance is always in the receding past or never-to-come future.

But it’s really cinematographer Christopher Doyle’s movie. At his incomparable best here, Doyle’s secret weapon is a degree in art history, and he captures the fall of fabric like Lorenzo Lotto. It’s astonishing and then some; no one has ever shot fabric like this before, or ever will again, one supposes—not Herb Ritts or Stephane Sednaoui or even Harry J. Wild. The swordsmen’s robes, very Miyake-does-the-Middle Kingdom, have the seeming of layered and tailored souls worn on the outside, leading actors in a movie about color, about saturation and blur constantly on the verge of escaping the slippery narrative and just hanging there in space, pure appearance, shimmering in the silver halide aura. The purity of looking competes with the story and gets the better of it. A streak of blood on a light green wall toggles between abstraction and mortality, and so does the film: a martial epic shot in close-up with almost no fighting.

It’s based on Louis Cha’s The Eagle-Shooting Horses, which Wong identified after the screening as “the second bestseller in the history of China, after Mao’s little red book.” But how could this be true, when the latter was distributed for free by the CP? Wong doesn’t claim to be avant-garde; still, he is oddly post festum, after the party. Claiming to be nothing but a witty aside, the remark was an exemplary instance of the festival’s necessary political blindness. Wong, after all, is Godard without a program: the problematic of the festival scenario encapsulated in a single brilliant director. But then Godard, who would never have botched a joke about the little red book, was nonetheless “the stupidest of the pro-Chinese Swiss,” in the words of Debord. It is a tricky thing, history; one wishes to think more of it.

JOSHUA CLOVER blogs at janedark.com. His history of popular music at the end of the Cold War, 1989: Bob Dylan Didn’t Have This to Sing About (University of California Press) will be published in 2009.