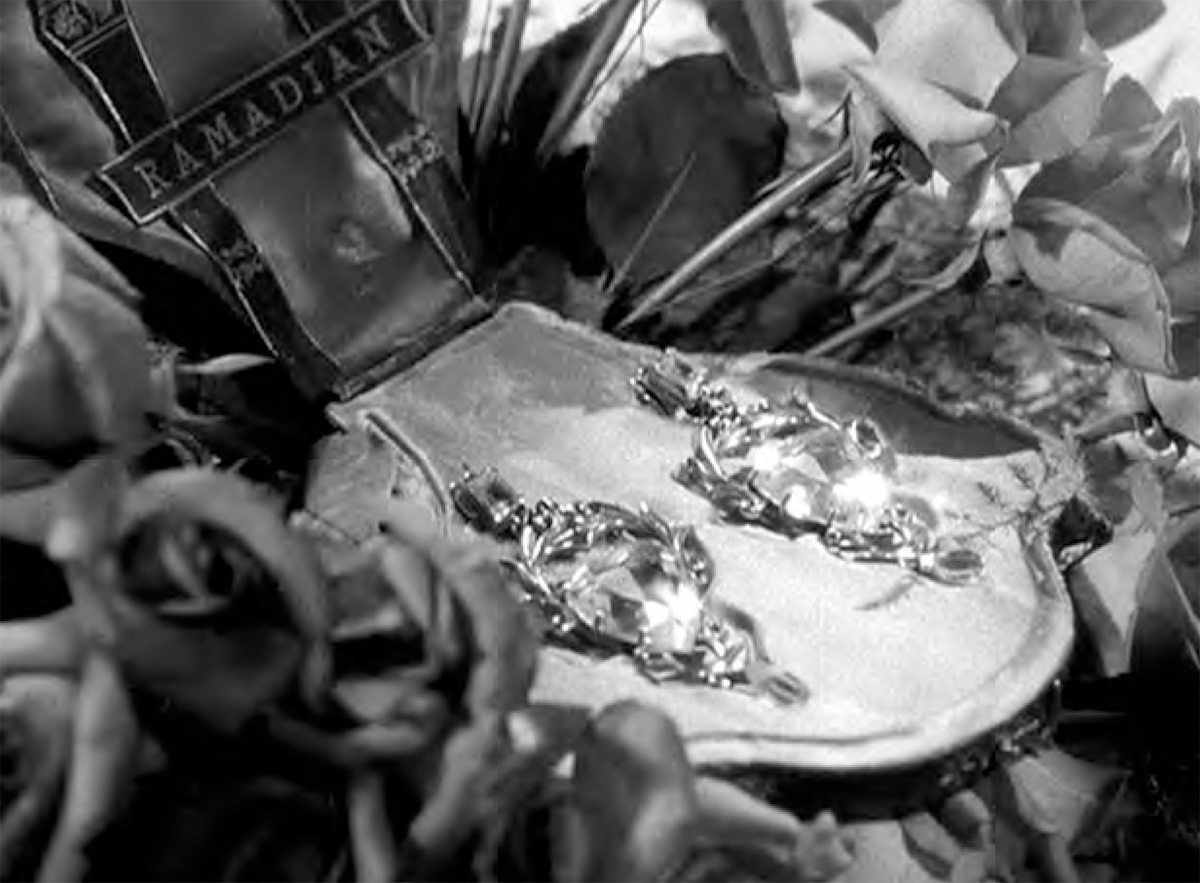 The Earrings of Madame de … (or just Madame de …, the original French and U.K. title by which I have always known it) was Max Ophuls’s penultimate film, preceding the difficult experience of Lola Montes (1955) and his untimely death at the age of fifty-five in 1957. Into it, as though he somehow sensed that his career was about to end, he collected so many of the themes that had preoccupied him over the previous two decades, reaching back to his first major production, Liebelei (1933), that the film feels almost like an Ophuls compendium. For this display of repetition and return, he chose a story that is actually about repetition and return, drawing attention to the way in which repetition is a theme in many of his films (as critics have pointed out). Scenes at railway stations or the opera recur in a number of the films, as do camera positions, gestures, words, and phrases. Such recapitulations give his films a rhythmic beat, which is accentuated by the trademark mobile camera, a key stylistic connection in his cinema. After Ophuls returned from Hollywood to France in 1950, repetition seemed to become the director’s dominant concern—from La Ronde in 1950 (which traces a circular chain of ten sexual encounters), to Lola Montes (in which the circular shape of the circus tent encompasses the repeated tableaux that frame the eponymous woman’s rise and fall). It is perhaps no wonder that Ophuls declared that it was mainly the circulation of the earrings that interested him in the Madame de … novella by Louise de Vilmorin. Nevertheless, he gave the characters and their dilemmas, as he translated them into cinema, great psychological poignancy and complexity.

Comtesse Louise (Danielle Darrieux) is a beautiful woman of the belle époque, married to the charming and sophisticated General André (Charles Boyer). At the very beginning of the film, in a scene shot in a single elegant, extended take, Louise examines her jewels and her valuable possessions to find something she can sell, without her husband’s knowledge, to pay off some debts she has accumulated. Among the excellent Criterion DVD extras is a translation of costume designer Alexander Annenkov’s reminiscences about working on the film. He recalls that Ophuls told Darrieux that her character is essentially empty, a woman without culture whose frivolous life revolves around pleasure. Indeed Madame de … starts out with Louise’s foolishness: in choosing to sell the diamond earrings given her by André the day after their wedding, she undervalues this emblem of her own sexual surrender, assessing the earrings simply in terms of monetary rather than symbolic exchange. Thus the earrings embark on their journey: the jeweller (Jean Debucourt), in spite of his promise of secrecy to Louise, informs her husband, who buys them back and then gives them to his mistress, Lola (Lia Di Leo), as a parting present when she leaves Paris. Louise pretends that the earrings are lost and the general indulges her deception. (Ophuls’s direction and Boyer’s performance complicate the figure of the general: his sympathy for Louise humanizes him just as her later fetishi-zation of the earrings dehumanizes her.) The earrings change hands again after Lola sells them in Constantinople and they are bought by Fabrizio Donati (Vittorio De Sica). In Paris, where he is posted as Italian ambassador, he and Louise are brought together: twice they meet fleetingly and by chance, only to find that their social circle (including the general) has decided that they are “made for each other,” with the implicit hint that Louise’s heartless coquetry has found its male equivalent in the ambassador. Although they begin a flirtation in this spirit, it develops into a grand passion. When their relationship is about to become a sexual affair, Donati gives Louise the earrings as a secret token of their love.

With this triangle, Ophuls repeats a configuration that he had first used in Liebelei and returned to in Letter from an Unknown Woman (1948), in each case revising aspects of the original stories in order to dramatize the opposition between the husband and the wife’s lover. Just as he gave the husband in both previous films highly rigid, aristocratic, and military attributes, so here again in Madame de … he transforms the “monsieur” of the novella into a general. (A fascinating extra on the DVD is a filmed interview with Vilmorin, in which she denounces the changes made to her story: from the elevation of the husband, to the relocation of the story historically to the belle époque, to the duel with which the film ends.) Ophuls’s version of Madame de … confirms that, above and beyond stories of romantic passion, he was interested in creating opposing iconographies of masculinity: on the one hand, a “feminized” man, a man who loves love, a “womanizer”; on the other hand, a husband who personifies the “law,” a representative of military and aristocratic “order.” Whereas the lover introduces the drive of desire into the story, the husband interrupts it with the drive of death. The conflict of opposing masculinities is ultimately played out off-screen in the duel, but it gets its fullest treatment in the scene in which the general confronts the ambassador with a series of insults that cannot but lead to a duel. Donati lounges in a chair, a cigarette in the corner of his mouth, while the general stands fully erect in his uniform and military accoutrements. Ultimately, the duel returns the story to the world of men; Louise and her love are marginalized, a process which is prefigured by Louise’s response to the amazing reappearance of the earrings. Entranced by what seems to her to be a manifestation of providence or fate, Louise lies to both men in order to be able to wear the jewels in public. She tells André she has found the earrings among her clothes; she explains to Donati that she has convinced her husband that they are the legacy of an obscure relative.

Now the earrings take on their full allegorical force: emblems of chance mistaken for destiny, they symbolize differences between male and female viewpoints, male coercion of female sexuality, inequalities in gendered power relations. Louise wants to celebrate sexual passion in the present and the future by wearing the earrings, but their prior connection to marriage and social propriety punitively and violently reasserts itself. When Louise appears at a ball wearing the diamond hearts, the general simply takes them from her and explains their origin to Donati (“a gift the day after our marriage”). Boyer and De Sica play the scene with exquisite subtlety and economy. The general’s revelation of his full knowledge of the earrings opens with a one-word question: “Constantinople?” Donati is trapped. He has to acknowledge with complete impassivity that the token of his passion for Louise has already signified her sexual surrender to her husband. With immediate, perfect diplomacy and compliance, he ends the relationship and takes the earrings back to the jeweller. After the earrings change hands again, Louise is devastated. Obsessed with reclaiming them, she sells all her remaining valuables to buy them back. It is then that the general, exasperated, challenges Donati. Louise dedicates the earrings to her favorite saint and, arriving at a distance from the duel, hears a gunshot and then exclaims: “Why no second shot?”

If the military man represents bodily rigidity, the point of halt, the stop of death that will bring a story to its end, the “womanizer” brings motion to the story through his ability to create emotion. In Madame de …, Ophuls frames abstract and structural problems: the relation of desire to narrative drive, or death to narrative’s termination, and these problems cannot be detached from the movement of the cinema itself, the destiny of the motion-picture machine, in which the narrative function of emotion is to enable the film to blossom into sequences of pure cinematic movement. The central set piece of the film consists of a slow montage across a series of balls in which Louise and Donati’s relationship moves from casual flirtation to passion. This blossoming of bodily and cinematic movement slows down the forward movement of the narrative, suggesting that the ecstasy of love involves slowing and delaying time. The image of dance is caught by mirrors breaking up the horizontal gliding of the camera with multiple, fragmented images. A nonlinear time emerges around the succession of waltzes, one in which movement is of the essence—but a free-flowing, purposeless circling of both camera and dancers, separate from forward movement toward “the end.” From this perspective, the guardian of the law also acts as a guardian of narrative development, bringing both its delay and irrational passion back onto a linear path, the end of which will be figured literally and metaphorically by the stop of death.

Ophuls was a modernist. Although he loved the kind of cinema, these melodramas of romantic failure, through which he earned his living and found creative expression, evidence exists across his films that he always looked ironically both on the illusion of love and the cinema illusion. Several theorists have commented on the significance of the love scene in Letter from an Unknown Woman that takes place in a little fairground train in which panorama scenes are mechanically presented outside the window. Ophuls shows how the old man creates the illusion with a bicyclepowered device. The earlier scene returns obliquely in the ballroom montage in Madame de … as mirrors occasionally break the screen into a horizontal panel of dancing couples, and particularly as large paintings are incorporated into the dance sequence, from which Louise and Donati emerge in a slow dissolve. At this point a strange couple intrude into the romantic scene: “the admiral and his wife,” elderly and somewhat grotesquely dressed for a masquerade, dance jerkily in front of the camera. While they satirize the romantic couple, stripped of glamor and the illusory trappings of love, their movements are also a reminder of the mechanics of the cinema—whose figures are simply animated still frames that give an impression of movement. As the dancing figures repeat the pattern of the waltz, shades of Letter from an Unknown Woman return, if only for a moment, to haunt another ambivalent Ophulsian scene.

LAURA MULVEY is the 2008–09 Mary Cornille Distinguished Visiting Professor at the Newhouse Center for the Humanities, Wellesley College.