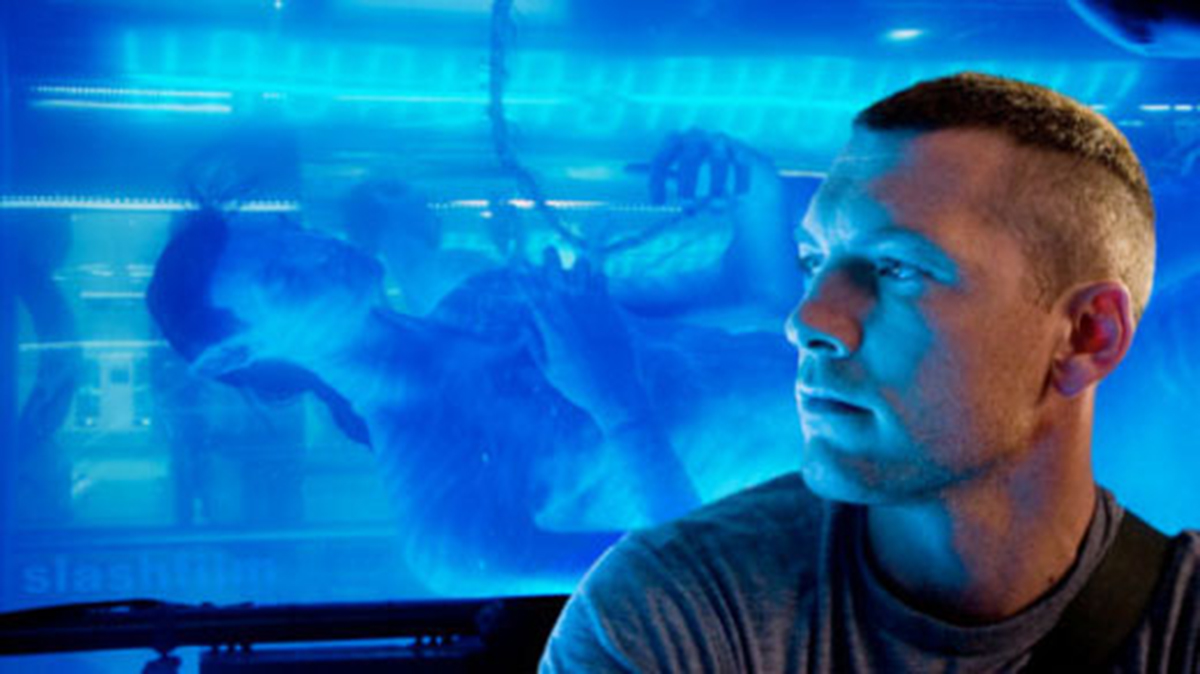 By common account, Avatar asks the great question of contemporary art, the one hip-hop has been asking unfailingly for some time: will we put up with a creepy worldview just because the sensuals are cool?

Critics have felt bound to qualify their admiration: the ecological parable is banal, the politics a sop to liberalism (or an outrage to the U.S. military, per the National Review et al., baited into weighing in), the treatment of indigenous people paternalistic—but c’mon folks, the reviews remind us, it’s Hollywood. And the big-ticket, scrupulously eye-popping CGI, the advanced motion-capture, and IMAXed-out 3D are amazing.

Fortunately we are spared this exercise in moral judgment. Mostly the movie looks like a series of Roger Dean album covers from 1970s prog-rock albums, set in motion. The technology is improving, but the achievement does not yet feel like a profound change in our experience of cinematic volume equivalent to Greg Toland’s deep focus, the introduction of CinemaScope, or the onset of the Steadicam. Yet there is no question that Cameron’s use of 3D is peculiarly significant; it is the completion of something. It is the teleological end of the director’s career rainbow; this is the film’s garbled eloquence. The third dimension and the special effect named “James Cameron” are each other’s context, without which the film is just Ferngully: The 3D Rainforest.

The invitation to read Avatar allegorically practically hangs on the marquee. Its only defense against this is to generate an allegory so chaotically inconsistent that one slinks away in defeat. The blue anthro-feline Na’vi, three meters tall, are not so much any indigenous people, but rather any number thereof: Native Americans in their natural harmony, or the Urarina of the Amazon rainforest—but no more these than, say, Iraqi natives (cued bluntly by the phrase “shock and awe”). Among these shifts, the oddest is when paraplegic corporate mercenary/incipient race traitor Jake Sully muses over how they are unlikely to throw over their world for “lite beer and jeans,” and the Na’vi seem to be … East Germans?

Meanwhile, the Na’vi spend a good deal of time hurling themselves about their terrain on Pandora for the sheer kinetics of it—basically, it’s parkour as enlightenment. This provides the main occasion for Jake, jacked into his similarly catlike Na’vish body, and native princess Neytiri to fall for each other. She schools him in the practice of tsaheylu, a bond established by twining one’s hairdo with that of a horse, or a pterodactyl. But the most profound bond is when the entire clan joins together with the nature goddess Eywa via the soul tree, a sort of fiber-optic server farm/arbor which allows practically global communion with the world spirit.

It’s messy enough to be interesting: spiritus mundi as James Lovelock’s Gaia hypothesis as network society as true democracy. Ponderous, a bit. That is, if one can be bothered to take the scenario at all seriously; Caleb Crain writes the whole thing off as the “church of Facebook” (www.steamthing.com). But there is something to the eco-techno-blather that isn’t entirely vacant. There’s an argument there, albeit a bit simplistic: that what we might call “vertical jacking” (as Jake into his vat-grown avatar and, by extension, a terminal operator into a Predator drone in Afghanistan, or you into Second Life) is bad, as it takes the fundamental form of domination: one extending its will into another. Conversely, “horizontal jacking” (with its at least purported sharing of wills) is just fine; indeed, it’s “natural,” even if conducted via technological means. And it is in fact a necessity in the face of unnatural domination, providing an alter-globalization. Okay, we didn’t say it was genius—but it is an idea, at least.

As an idea, it bears a curious relation to Cameron’s body of work, which itself is organized by a single idea: the necessity of the augmented human body in the struggle against inhuman beings. The paradigmatic moment (one of this column’s favorites; see “Dream Machines,” winter 2007–08) is the final confrontation between Sigourney Weaver, strapped into an exoskeletal powerloader to fight the mother of all Aliens. Lest we miss it, Avatar pointedly returns both Weaver (as a no-nonsense but still maternal scientist) and the power-loader, almost comically referential but now even more bellicose.

But the theme is everywhere in Cameron, with variations of exactly the range to insist on the core structure. Consider Ed Harris’s long descent into The Abyss, outfitted in his bespoke deep-dive pressure suit for an alien world he could not otherwise enter. Or Jessica Alba, playing the hero of Cameron-produced series Dark Angel: a genetically modified soldier “with a dash of feline DNA … which makes me an awesome killing machine and a hoot at parties.” The Terminator seems at first an inversion of the Cameron principle—a machine augmented toward the human—but one sees easily this is the same schema, neatly inverted. Consequently, Arnold flips teams in the sequel; how could he not? In Cameron’s worlds, humans need an augmented hero or they simply cannot proceed. One is not surprised, then, by the full IMDb synopsis of Cameron’s first writing and directing credit, the 1978 short Xenogenesis: “A woman and an engineered man are sent in a gigantic sentient starship to search space for a place to start a new life cycle. Raj decides to take a look around the ship. He comes across a gigantic robotic cleaner. Combat ensues.”

The exception is a glaring one: Cameron’s most famous effort to date, Titanic. There is the all-too-fragile Leonardo DiCaprio, the fulsomely human Kate Winslet, and no augmentation in sight. But this, surely, deserves the crown for “exception that proves the rule.” After all, in what would become that film’s signature moment, DiCaprio leans himself out on the bowsprit, one with the vessel. The entire ocean liner must become his prosthetic, so he can become “king of the world!” Inevitably, this is the line Cameron would repeat, discomfitingly, upon winning the Academy Award.

Though it appears couched in noble terms (often enough the preservation of the race) and never more so than in Avatar, the logic of augmentation is inevitably the logic of king of the world—of the domination of space. This is Cameron’s visual stock in trade: the Titanic abreast the vast seas, the incredible chase sequence with titanic truck in T3, Alba’s Max Guevara perched vertiginously high above Seattle in Dark Angel‘s opening credits. And so the ballyhooed three-dimensionality of Avatar finally makes sense: a new space for James Cameron to assert dominion over—armed only with a quarter-billion dollars and all the technological augmentation it can buy. What happens to the Na’vi and humans is just a pretext for this drama, the anti-imperialist rhetoric a perfect inversion of Cameron’s real logic. And the prosthetic eyes we all have to strap on just to take part are a kind of irony—the only tsaheylu paying customers are allowed (unless the payment itself is the real tsaheylu, a credit-card code twining around strands of digital uplink). To see the new world James Cameron is king of, we too have be augmented just a little.

King of the jungle Avatar. Courtesy of 20th Century Fox.

It seems a fair counterbalance to Avatar: it too is about imperialism and alter-globalization, about militarized corporate advance and counter-struggle. It ends in neither victory nor defeat, and does not suggest that one true-hearted renegade can make a difference. The bodies captured in lo-def have only the familiar augmentations: riot gear, improvised masks. It debuted not in an IMAX citadel but a squatted public library, and there is no way to pay for it (available on Google Video and similar sites). Nonetheless, the movie takes the way things look every bit as seriously; it has not abandoned the image either to Hollywood or to some pessimism of the spectacle.

There are passages that feel like they are about nothing so much as the fact that fire is beautiful—more so than anything Avatar can contrive. Avatar‘s augmentation is, in the end, compensatory. Like Jake, jacked into a hyperkinesthetic body in complement to his human body’s immobility, Avatar is “three-dimensional” in inverse proportion to the extent that it concerns the actual disposition of space. Its world, its situation, can be realized exactly because it bears no debt to the possible.

The resolute two-dimensionality of Storming Heaven, contrarily, indexes an actual struggle over space, with the real limits that implies. This does not interfere with its beauty; it allows it. Fire is perhaps always beautiful, but its beauty does not float free of what fire might do, in a given situation. It is not an aesthetic but a political fact.

Joshua Clover is the author of 1989: Bob Dylan Didn’t Have This to Sing About (University of California Press, 2009).