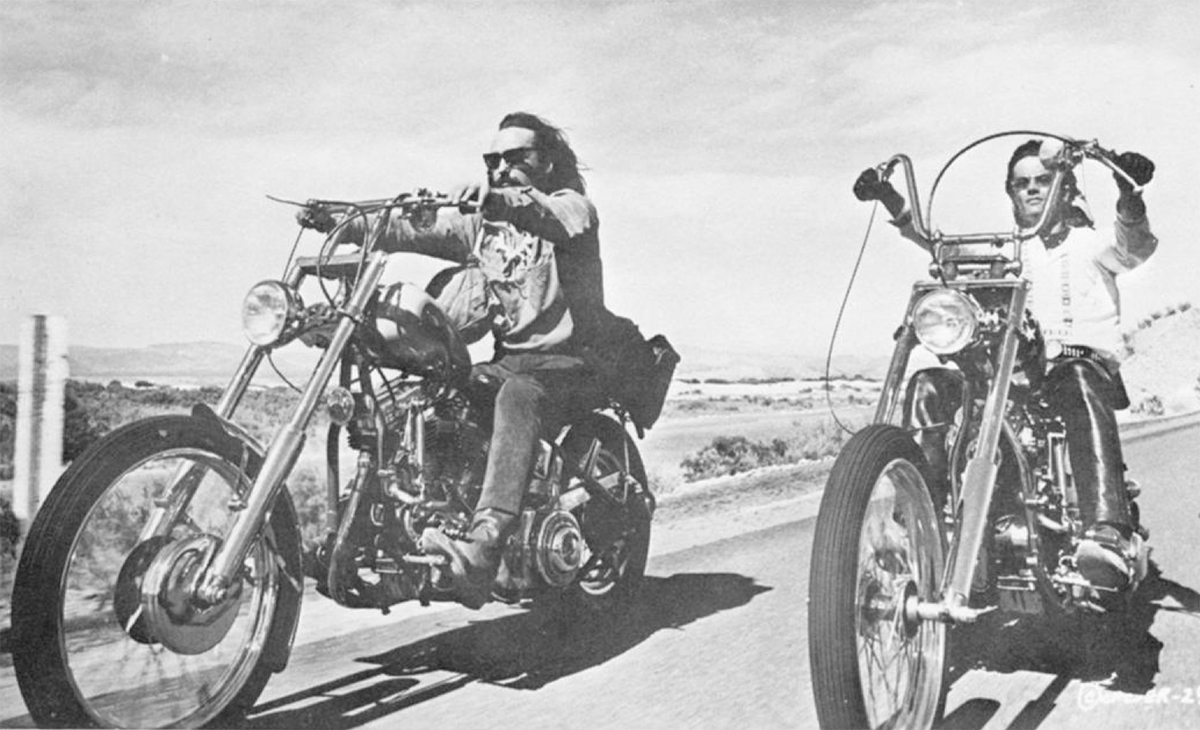 Easy Rider is a motorcycle film and also a kind of latter-day Western. What makes it remarkable, aside from the fact that it contains none of the idiocies of the former genre and few of those of the latter, is that it is perhaps the first feature film to capture successfully the conflict between the new hippy, “tribal,” drug-oriented generation and their opposite numbers in the straight world. It is honest, almost always convincing, beautiful, and engrossing.

The film opens with Wyatt (Peter Fonda, who also produced) and Billy (Dennis Hopper, who directed) in Mexico making a purchase of cocaine. In the next scene they are selling it to a well-heeled pusher with whom they rendezvous under the landing approach at the Los Angeles airport. The morality of this operation is not commented upon, though the background rock band at this point sings “God Damn the Pusher.” Their new wealth gives the two young men freedom, and immediately we see them riding off on their spectacularly shiny motorcycles, Wyatt’s embellished with an American flag (he calls himself “Captain America” throughout the film).

Significantly, the titles appear at this point, as the two men begin their journey through a landscape familiar to us from many Westerns. Now the film takes on an epic and episodic quality, the grandeur of the landscape and the freedom of the ride enhanced by Laszlo Kovacs’s poetic photography. They stop for an al fresco lunch with a farmer and his large family, then pick up a hippy hitch-hiker and accompany him to his commune. Always the tension is present: motel owners won’t rent rooms to them, farmers regard them with reserve, Billy is nervous that the hitch-hiker will find the money hidden in a piece of plastic tubing in Wyatt’s gas tank. Casting himself as the suspicious, paranoid, unkind Billy enables Hopper not only to escape the holy-hippy syndrome but to get some interesting contrasts of manner and feeling between the two men. Wyatt is truly cool, but Billy has a lot to learn, and in the end his truculence leads them to disaster. Some farmers and people along the roadside accept them, the commune-dwellers—at least the girls— want them to stay; but Wyatt, clearly the leader, has to push on. It is part of the legendary American quality of the film that they have to keep moving, heading vaguely for New Orleans and the Mardi Gras.

As they get closer to their goal, the natives become more and more unfriendly. In a little town they spontaneously join the tag-end of a parade and are arrested for “parading without a permit.” Their cell-mate George, a drunken young local aristocrat, turns out surprisingly to be on their side (“Ah’m a law’r-done a lot of work for ACLU”), and in the morning when they are all released, they quite easily convince him that he, too, wants to go to New Orleans. Superbly played by Jack Nicholson, George rides in his white suit and football helmet behind Wyatt, swigs from his whiskey bottle, and after some protest joins the other two in their nightly marijuana-smoking. George is both a type (“What’s that? Marijuana? Oh, ah couldn’t do that!”) and yet a truly original character, and during his brief time on the screen he becomes the most lovable of the three, combining the familiar vices and charms of the old with a gleeful inclination to try the untried. His role, moreover, offers the non-hip viewer someone to identify with in the film: Fonda may be slightly sinister, and Hopper slightly nasty or uptight, but American audiences know where they are with an amiable drunk.

The atmosphere grows increasingly hostile, and in a cafe somewhere in the south, while the teen-age girls giggle and flirt, the local sheriff and his cohorts make loud remarks about long hair and fairies. Wyatt, Billy, and George leave without being served. That night, in a brutal but economical scene, the locals come out and beat up the men in their sleeping-bags, killing George.

Wyatt and Billy finally reach New Orleans, and, clean shaven for the first time, visit the brothel that George had told them of, because “he would have wanted us to.” The omens of disaster become more intense. The brothel is reminiscent of a decaying baroque church, and in an episode filmed in grainy 16mm, the two men and their whores have an eeriely bad LSD trip in a cemetery. It is a grim yet fitting climax.

The ending is bloody, equally grim and fitting. Billy gives the finger to two hicks who are trying to scare him with a gun, and they let him have it. Then, for good measure, or to make sure that Wyatt doesn’t report them, they finish him off also. As his gaudy bike leaps high into the air, the film is over.

In a way, freedom is what Easy Rider is about—the craving for freedom and the inability to use it once it’s been attained. The small-towners who hound and imprison Billy and Wyatt are, as George says, afraid of the freedom they represent. “Don’t ever tell any- body they ain’t free, ’cause they’re gonna get real busy killin’ and maimin’ to prove they’re free,” he adds. The Southwestern farmer, who has a horde of children because his wife is Catholic, had aimed for California when he was young, he says, but “you know how it is… ” To Billy and Wyatt, the money stashed in the gas tank represents freedom. Yet when they get to the commune, where they could perhaps live as freely as anywhere, Wyatt feels that he has to leave. Later, by the campfire, he says enigmatically, “We blew it.” Whether “it” refers to a chance for happiness in the commune, or something else, isn’t quite clear; we are left to speculate for ourselves whether Hopper intends some criticism of the individualist ethic the cyclists have lived and will die by.

The film’s one weakness is the mystical tone that overlies some parts of it (was the country ever the tolerant place the script imagines?) and the romantic gloss given to a couple of the episodes, notably the farm lunch and commune episodes. The commune-dwellers are too uniformly clean, friendly, well-housed, and pious to be true; and the mime troupe which suddenly appears is not only implausible but also faintly embarrassing: a bit of Los Angeles “culture” worked up for the commune sequence, which seems to have been shot somewhere in the LA hills.

Wyatt himself radiates this romantic aura, but Peter Fonda brings the part off so that the character is appealing rather than offensive. Lonely, driven, yet kind and generous to strangers, he is a modern variation of the classical frontier hero and not so very far from characters Henry Fonda used to play. If instead of a white Stetson he wears a red-white-and-blue crash helmet, this chiefly indicates a change in forms of locomotion. More significant of changing times is the fact that his quest leads him to the east instead of to the west, and that violence and death come from the longer-established settlers rather than from the Indians, Mexicans, or nouveaux-tribesmen of the commune.

Easy Rider is a film which will probably be appreciated by many people for the wrong reasons. The squares will come for the sensationalism of pot-smoking and naked hippies; the hippies will come to see their stereotypes about cops and southerners reinforced; and everybody who loved A Man and a Woman will come for the lapses into facile loveliness of open roads in the photography. Nonetheless, Easy Rider is an important film for our time, one of the few that shows America as it is today.