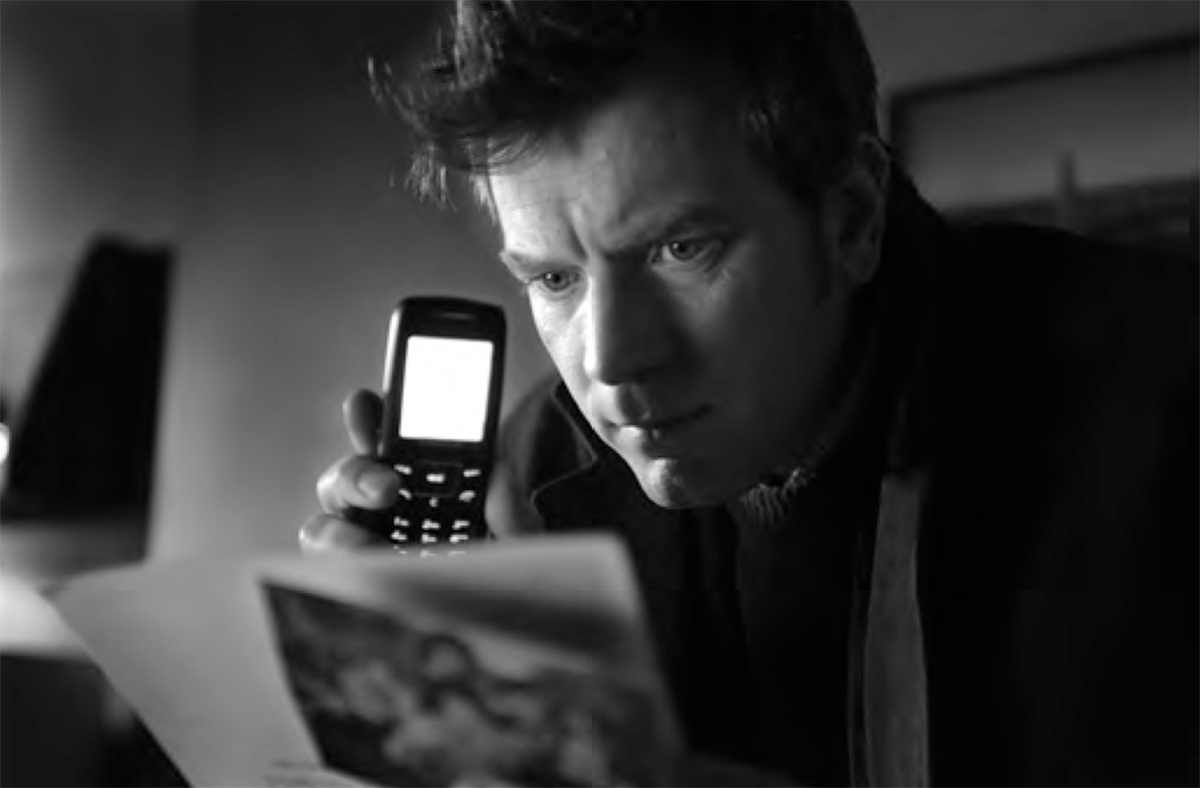 The Ghost Writer concludes like Chinatown: a traffic accident, curious passersby, a mood of fatalism. Private detective Jake Gittes intends to do good in Roman Polanski’s 1974 thriller— “I want the big boys that are making the payoffs”—but it all goes wrong. He ushers in the disastrous outcome for his client and her daughter, and what makes it worse is that something similar has happened before (“I was trying to keep someone from being hurt; I ended up making sure that she was hurt”). It is a Promethean doom. Nevertheless, during the modest, unsteady crane shot that finishes Chinatown, Gittes remains in the center of the screen as he stumbles away into the night, a sort of hero still. Things have changed since then. Icier characters start to appear in Polanski’s work: impassive males on the verge of psychic lockdown, closer to narcolepsy than noir. The apathetic policemen and hotel staff in Frantic impede the doctor’s desperate hunt for his kidnapped wife. For a while, the orphan in Oliver Twist spurns Fagin with an automaton expression of disdain. Then there is The Pianist’s introspective musician, traumatized almost to the point of coma.

The unnamed protagonist of The Ghost Writer cannot be mistaken for a hero. Skillfully played by Ewan McGregor, he is a burnt-out case. He pitches for the job of improving the memoirs of a bellicose former British prime minister (he says he will ask “questions that that get to the heart of who Adam Lang is”), but only looks alert during the meeting when he stares malevolently at the supercilious editor-in-chief. Later he sits in a hotel bar, tipsy and blank-eyed, trying to ignore a creepy stranger. Even condescension sometimes seems to be too much bother. After he has been mugged in the street, he wonders if Lang’s staff used him as a “tethered goat” to draw out manuscript thieves. The theory is voiced with such contemptuous irony, however, that the weird sense is conveyed of a character bored by the suspicious speculation required of him. Disengagement is apparent again during a cozy supper with Lang’s moaning wife. “I suppose even ghosts must have feelings,” she says patronisingly. “We are sensitive spirits,” he replies—a perfunctory response that could not be further from the truth. This cipher is just going through the motions, less an anguished specter than a clockwork marionette whose mechanism is running down.

Polanski flattens his protagonist, turning him “undimensional” (to use a term from Evan Calder Williams’s essay on Dillinger Is Dead). This amounts to a reversal of the ghosting process. The film’s bestseller source, Robert Harris’s The Ghost (Arrow Books), is narrated in the first person. The writer is surprised when he reads Lang’s draft: “A crock of shit, Rick had called it. But actually this was worse. Shit, to quote Gore Vidal, has its own integrity. This was a crock of nothing. It was strictly accurate and yet overall it was a lie—it had to be, I thought. No human being could pass through life and feel so little.” Inside the memoir’s vacuum, there must be a complex personality, and the novel emphasizes the psychological enigma: “Lang looked at me. And, oh, what layers of meaning there were to be read in those glaucous eyes!” What is so eerie about the film’s scribbler is his own shallowness. There are no layers—merely a sardonic shell where the semblance of a person might have been.

Frantic also ends with city streets. One of its last images is disconcerting: two trashcans are mechanically emptied into a waste-disposal truck that slowly drives down a Parisian avenue. In Polanski’s recent movies, the conventions of thriller heroism have gone out with the trash. At the conclusion of The Ghost Writer, the camera suddenly abandons the protagonist. What happens next is uncertain; for all we know, he might have vanished into thin air. But there was nothing much to disappear and the passersby soon move along. Unlike Roman Polanski, they have more on their minds than death.

From the outset, The White Ribbon is a film of painful encounters. The title appears on a black screen and a subtitle is slowly spelled in calligraphy: Eine deutsche Kindergeschichte (“A German Children’s Story”). After the main technical credits have flashed up in the darkness, the image gradually dissolves to a meadow. A horseman gallops into the foreground before collapsing, felled by a tripwire. There is a stark contrast between the credits’ black backdrop and the daylight, the creep of the subtitle’s lettering and the animal’s swiftness. These antitheses of speed and visibility are not resolved, ending instead with a fall.

The mysteries of Michael Haneke’s new film plagued me more than they should have done. Who strung out the tripwire, burned the barn, tortured two boys? I admit that I too became ensnared. I was, for example, troubled by the culmination of the scene in which a boy looks at his mother’s corpse laid out before burial. He realizes he is not alone in the room. “Karli,” he murmurs, and walks into the corner. It is just possible to make out another figure wearing a white nightgown, but the person’s face is obscured. The incident is perplexing because Karli is the midwife’s son and this is the farmer’s home. After the publication of the DVD I took a screenshot and adjusted the levels so as to discern an older brother (the one who later discovers their father hanged). I had started reading so closely I was ready to strip an image of its shadows by means of amateur CGI. (I am indebted to D. A. Miller’s idea of “Too Close Reading” in “Hitchcock’s Hidden Pictures,” Critical Inquiry, summer 2010.) And after all that there was nothing important to be found in the gloom.

I tried to connect The White Ribbon and Haneke’s Caché. The doorways that often form frames within the frame raise the issue of spectatorship in The White Ribbon as video playback does in Caché. Furthermore, perpetrators prove unidentifiable in both films. Most interesting to me were links between the two finales. Curtains are drawn by Georges in Caché as well as the pastor in The White Ribbon; each penultimate shot shows a courtyard viewed from within an outhouse; then the ultimate long, frontal takes, the schoolteacher who narrates The White Ribbon tidied away in a corner in something like the inconspicuous way the two teenagers appear at the end of Caché. Was there a pattern here — twinned image sequences encompassing repression, a reminder of reality, revived paranoia? Did the fluent, complacent schoolteacher resemble unreliable Georges the talk-show host? But, if so, in what way was the teacher a culprit? The ideas would not take. I was in a hall of mirrors leading nowhere.

Two series of events in The White Ribbon seemed to me to run in parallel and imply a calculus of culpability. On three occasions a child opens a door to find a gruesome sight; I matched them to a trio of scenes in which a vindictive adult strikes a youngster, each blow more ferocious than the previous one. I perceived an asymmetry of violence: the adults assault, the children observe. And in the first set of scenarios they bear solitary witness, belying the initial voiceover insinuation of complicity: “If I remember rightly, it seemed odd to me that the children with Klara, instead of scattering after school to their homes, headed together to the outskirts of the village.” Actually children from different families are rarely visible in a group. Is it plausible that they could escape custodial vigilance in order to conspire and then go on the rampage? Yet I could not deny the evidence of adolescent malice (particularly the crucified bird).

During one unsupervised spell, after the maiming of Karli, nine children eavesdrop outside the schoolroom. Inside, the teacher watches while the steward’s daughter is bullied by policemen. When one abruptly opens the door, the furtive listeners are discovered. A stilted conversation ensues; “we wondered if we could help,” says the pastor’s daughter. Separated by the doorframe, the two factions confound each other’s investigation. It is an uneasy stand-off, one more unresolved conflict, and an image of my own unsuccessful hunt for secret meanings.

The essays on The White Ribbon by Garrett Stewart and James S. Williams avoid any such impasse. They propose differing interpretations of the film, but both stress narrative disruption. The “story comes across like hacked diagnostic fragments on a dissecting table,” according to Stewart: episodes are strung together without intelligible causality. They signify more as national symbolism than storytelling, “cross-sections of a systemic malady.” Williams dwells on sonic breaches, notably one strange occasion when the voiceover is not spoken by the schoolteacher. Again the story’s fabric gets torn, letting in uncanny sounds.

The world of The White Ribbon is wounded. The horror and darkness are sometimes punctured by dazzling light. Several windows are illuminated with a glare that could belong to an apocalyptic fire that has left nothing outside. Landscape shots devoid of people cause another kind of rupture. One scene is remarkable for its minimalism: a vast empty sky, a field covered in unmarked snow, two skeletal trees. These barren, nullified vistas in The White Ribbon situate the village in what Williams calls “an eerily frozen, silent, almost embalmed universe.” What should we make of these annihilated, deathly spaces? Do they (as Stewart argues) prefigure war and fascism, or do they rather (as Williams claims) envision resistance to domination and hierarchy? The gravity of these questions is an index of the richness of Michael Haneke’s extraordinary film.