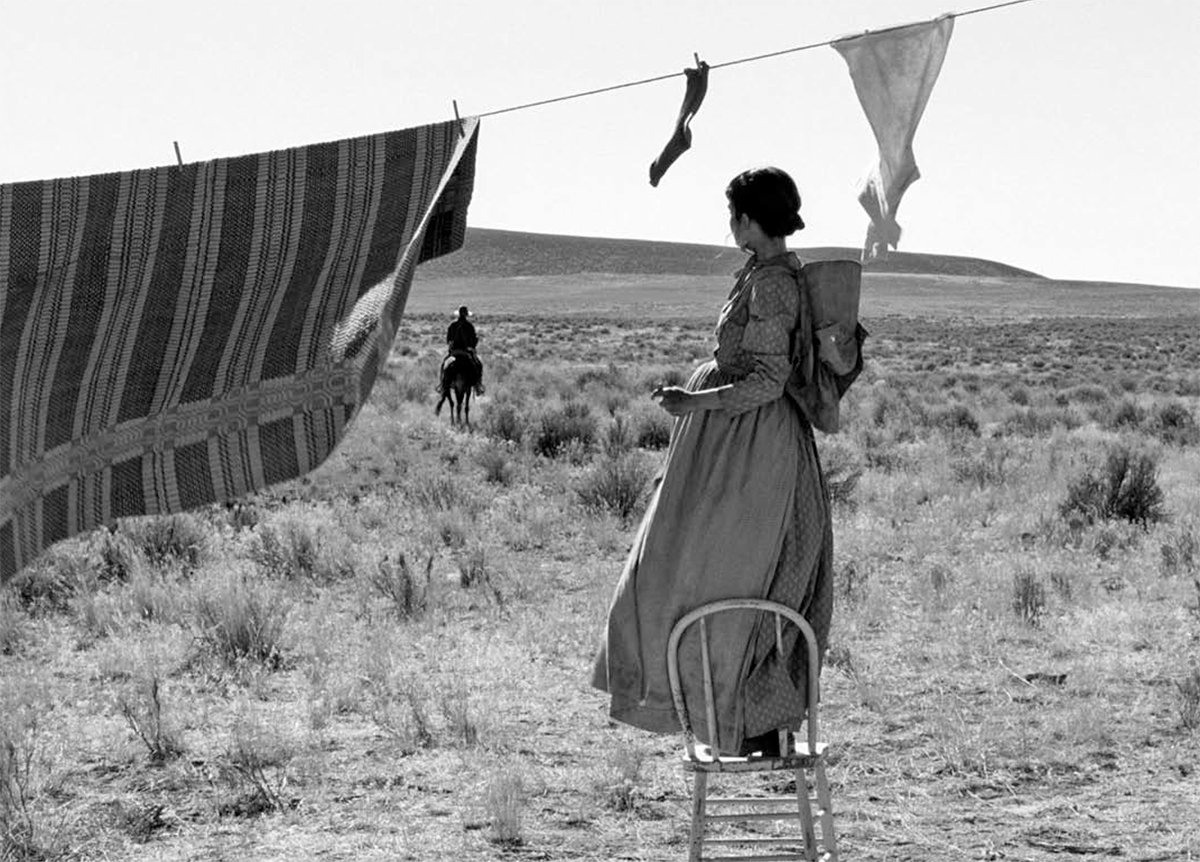 Two period pictures at the New York Film Festival (September 24–October 10) investigate history from an oblique viewpoint. Pablo Larrain’s Post Mortem replays 1973’s bloody coup against Marxist president of Chile Salvador Allende from the perspective of an autopsy clerk; Kelly Reichardt’s Meek’s Cutoff, set in 1845, tracks a wandering wagon team on the Oregon Trail at a time when that territory’s ownership was yet to be established. In both features, huge events or processes (the overturning of a government in South America, the establishment of a new order in North America) take place offscreen, invisible to characters and spectators alike.

Post Mortem begins with a black screen and a deafening noise. The source proves to be a tank seen only from beneath its undercarriage as it rolls over a street strewn with detritus. Cut to blank-faced, lank-haired Mario (Alfredo Castro, the John Travolta impersonator from Larrain’s earlier Tony Manero) gazing stolidly, steadily from a window. Mario, it seems, likes to look. We follow him to a louche burlesque club where he spies on the dancers from the wings and infiltrates the dressing room where his neighbor, showgirl Nancy (Antonia Zegers), has just been fired for being too thin. Taking her home in his car (his bad hair rhymes with her bad wig), they are suddenly surrounded by demonstrating students. Nancy is pulled out by a handsome shaggy radical, leaving Mario marooned amid the surging crowd, with history literally passing him by.

Post Mortem seems at points to mock the political passions of its age: mild-mannered white-coated technicians at Mario’s mortuary chant revolutionary slogans and announce the imminent arrival of the New (Communist) Man. With its buzzing fluorescents and echoing floors, the facility seems an unlikely stage for such fervor. Apparently affect-less, Mario is ever marginal. Stalking the anorexic Nancy, he hovers at the edge of smoke-filled rooms where radicals argue; and when the two first spend time together, both weep uncontrollably (and inexplicably) over the fried eggs Mario has so carefully prepared. Typically the food is kept out of frame, with Larrain focusing mercilessly on his characters’ faces. When we suddenly cut to the odd couple having sex the framing is equally eccentric: we see half her face and breast as Mario howls once more, as he had when he wept at the table.

Larrain also uses sound design to trace the boundaries of history. The tentative affair is cut brutally short by a coup that is shown only in its absence. As Mario showers we hear offscreen what he cannot: the smashing of glass that signals the destruction of his neighbor’s house. Fighter planes, unseen once more, thunder overhead. When Mario ventures out, the city is suddenly silent, reduced to smoking ruins. Soon naked bodies pile up at the morgue. But Mario is more focused on attending to an injured dog, rescued from the home of his now missing girlfriend.

Larrain’s most daring commentary on history is yet to come. Mario and his colleagues, wearing incongruous hard hats over their lab coats, are taken to the scene of a special autopsy. Minute description of a brutalized body precedes the revelation that this is Allende himself, the victim of murder or suicide. But Post Mortem focuses here not on the dead president but on Mario. Offered an unfamiliar electric typewriter, he proves comically incapable of recording the most important autopsy in the history of his nation. And the resolution of the personal narrative proves to be as offbeat as this political story. Mario will be reunited with his obsession, the faithless Nancy, but his revenge on her will be signaled by a lengthy close up of an egg, left frying in the pan to a charred black.

In a Skype-enabled Q&A at the press screening, Larrain (who was born in 1976) acknowledged that the period in which his film is set is for him a “mystery” and that he sought rather to recreate a mood, a “quiet, strange feeling.” And as a filmmaker he makes no judgment on those he depicts, characters who are indifferent to politics yet finally affected by it. Interestingly Larrain located his labor of historical reconstruction not in art design but in cinematography: spurning the digital tweaking of the modern era, Post Mortem uses no post-production effects and is shot with anamorphic lenses made in the late Soviet period.

Meek’s Cutoff starts with similar obliqueness. In the first shot oxen pull a wagon across a racing river. Women wade, breast high in the water, holding a birdcage and a basket on their heads. Just as their bodies are swathed in sodden fabric, so their faces are hidden by stubborn bonnets. As free from dialogue as Post Mortem, Meek’s Cutoff attentively follows the wordless labor of settler life: the loading of precious water and the washing of dirty dishes, the feeding of a fragile canary in that incongruous cage. A man then carves a single word on dry driftwood: “Lost.”

Like Larrain’s clerk, then, Reichardt’s travelers seem all at sea from the very start, adrift in a historical process that continues, unperceived, all around them. And as in the Biblical narrative of Adam’s expulsion from Paradise, which they read aloud by the campfire, these pious migrants (led by an impressively stoic Michelle Williams) seem to be already in exile even as they light out for a territory that is described by their charismatic guide Meek (a wild-bearded Bruce Greenwood) as a “regular second Eden.”

But while Post Mortem is contained within a claustrophobic city (stricken streets, shattered homes), Meek’s Cutoff is set in an expansive, ecstatic landscape that seems to mock those who blunder so determinedly across it. Handsome horizontal compositions strip wide sky above bleak desert and merciless alkaline lakes; too bright stars pierce night skies seething with dark clouds. Reichardt (director of Old Joy, an earlier inconclusive trek into nature) has a gift for the telling detail that is as handsome as it is ominous: a lost cotton handkerchief blown by the wind over a cracked, baked river bed, pursued by a bonneted lady who might seem more at home in a drawing room than in this wilderness.

The American sublime of landscape thus frames and almost forecloses the horrors of history. As the women rise before dawn to build the fires, they casually use a racial epithet to complain about how hard they work; Meek breezily recounts his role in a massacre of Indians at a lake, a day spent “duckin’ and divin’ and shootin’.” And when conflict is introduced it is, as in Post Mortem, at the margins of the frame. The camera follows the embroidered hem of a lady’s dress through the brush until it stumbles upon the legs of a (previously unseen) Native American.

History is here very much in the balance. The characters repeatedly ask themselves if the territory will “go” American, Indian, or English. Lost in time, they (and we) are equally disorientated in space. Meek claims that the mountains they are traveling through have no name. Yet the Indian they capture reads and writes pictographs on the rocks and addresses the landscape at length (praying or pleading?) in a native language that goes untranslated. As the wagon team lose hope (starched cuffs are stained black with dust, husbands succumb to fever), they are stuck in a period and place that are illegible to them and salutarily strange to us. While Post Mortem’s ending is brutally closed, the conclusion of Meek’s Cutoff is defiantly inconclusive. But what both of these remarkable films reveal is that when a familiar history is viewed from the margins (from a place of insistent, and resonant, incomprehension) we see it, with a shock, as if for the first time.

Paul Julian Smith is Distinguished Professor in the Hispanic and Luso-Brazilian Literatures Program at the Graduate Center, CUNY.