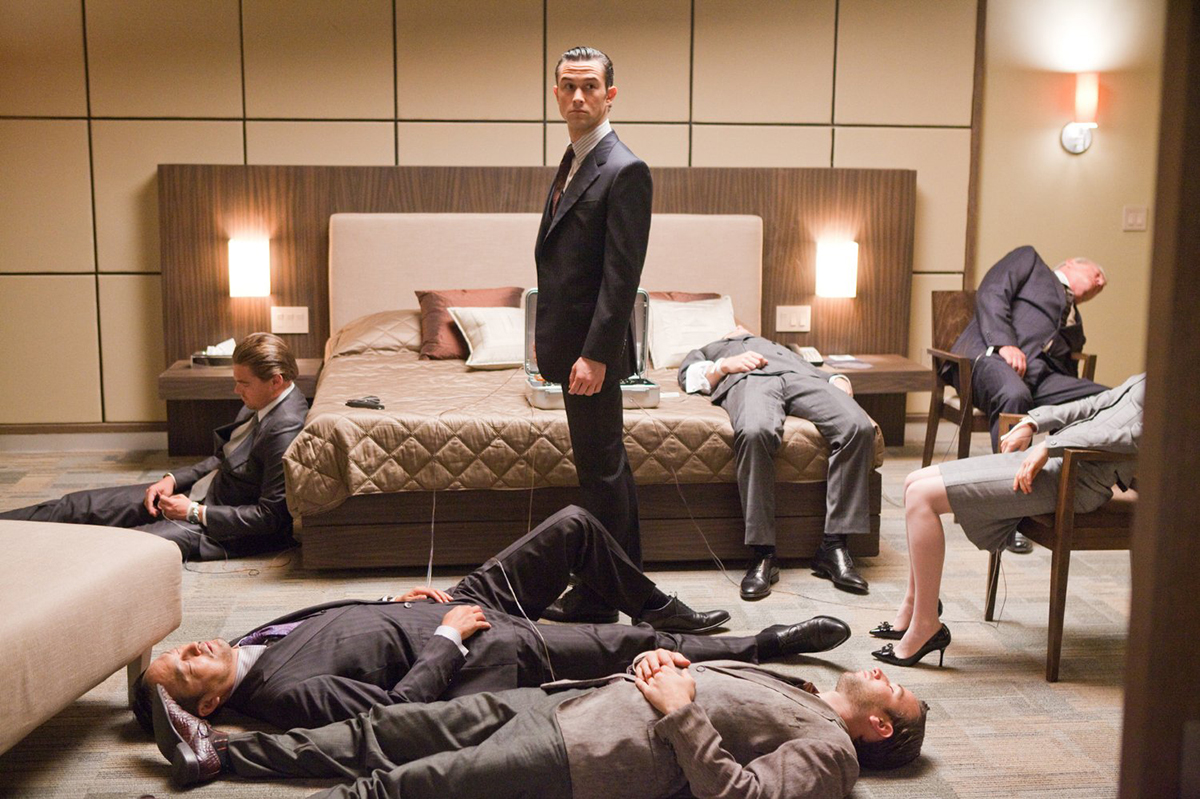 “Come back and we’ll be young men together again,” says Cobb (Leonardo DiCaprio) to old Saito (Ken Watanabe), who has been trapped in a godforsaken fantasy underworld, at the end of Inception. Although Edith Piaf’s recording of “Non, je ne regrette rien” is repeatedly heard in Christopher Nolan’s thriller—it is the musical warning to the film’s psyche saboteurs that they are shortly to be “kicked” from one dream realm to another—the film is full of nostalgia and remorse. Cobb himself is anguished by his role in the death of his shellshocked wife, Mal (Marion Cotillard): “I feel guilt,” he confesses, “and no matter what I do, no matter how hopeless I am, no matter how confused, that guilt is always there.”

“DAY (FEELS LIKE DIFFERENT TIME)” is a scene heading in the shooting script (Insight Editions, 2010) and a surprising aspect of Inception is the moribund onscreen technology. Whereas films like Iron Man or Nolan’s The Dark Knight delight in futuristic gadgetry, Inception goes retro. A remark the director makes in an interview published with the script about “the infinite potential of the human mind” touches on the matter: “we talk about this all the time, using the analogy of the computer for the human brain.” But then he adds, “I am always interested in things that seem to defy that analogy.” Nolan’s mildly Luddite remark is consistent with the way Inception shuns new media. Cobb and his crew of mind hijackers study their target using paper documents and printed photos; three cellphones and a single lonely laptop disappear almost as soon as they are glimpsed and Cobb calls home on an old-fashioned landline with a cord—even walkie-talkie earpieces have curly wire connections. Ariadne (Ellen Page), the film’s novice dream architect, builds physical rather than virtual models of her designs; Cobb’s sidekick Arthur (Joseph Gordon-Levitt) unpacks his PASIV machine in a room that must have once been a print shop since it contains a type cabinet and two presses. Inception spurns wireless telecoms and digitization as if wiring were the tangible emblem of some deeper compulsive attachment to the past. Just look at the desultory zero-gravity set piece: Arthur bundles his drugged cohorts together with electrical cord, then climbs up a wirelike elevator cable before detonating explosives adorned with bright red fusewire. This spacey action sequence is deficient in excitement but it lays bare the circuitry of the film’s techno-reminiscence.

Inception is preoccupied with secret mental spaces that preserve the past. It is revealed that Cobb and his wife got lost in an imaginary no-man’s-land while they “were exploring the concept of a dream-within-a-dream” and he surreptitiously brainwashed her in order to return to reality. Her suicide was the unintended consequence of this manipulation and it fills Cobb with a regret so strong it resembles addiction. Narcosis is crucial to the film: as well as being crisscrossed by wires, Inception abounds with pharmaceutical infusion lines which enable people to tap into the PASIV— short for Portable Automated Somnacin IntraVenous— Device (helpfully diagrammed in an appendix to the script). Cobb tests a sedative in a Mombasa den for dream junkies and sometimes at night he sets up the PASIV machine in order to relive his marriage to Mal. “You don’t understand,” he tells Ariadne. “These are moments that I regret. They’re memories I have to change.” But she objects to this DIY therapy, discerning a more coercive intent: “Do you think that you can just build a prison of memories to lock her in?” It is fair comment. Cobb descends in his stupor to a silo-like memory palace with its own elevator. There he apparently chooses to witness his wife’s death over and over in his personal nightmare theater and when he shuts the elevator’s metal gate he makes a cage for Mal.

The narrative has a shattered, traumatized quality overall, jumping from one different time to another. (A caption for a script illustration could describe the movie itself: “Utopia in Deterioration.”) This elaborate thought-control plot cannot quite keep itself together, replicating the oneiric instability that occurs when someone resists the crew. Cobb explains to Ariadne that if dream infiltration is too blatant, the target mind defends itself with antigen-like “projections,” uncannily envisioned in the film as peripheral characters that look to camera while the environment starts to shake: “The more you change things the quicker the projections start to converge on you.” If that happens, Arthur adds, the saboteurs can be torn to pieces. Near the beginning of Inception such an incident occurs in a city dreamed by the billionaire industrialist Saito that could be Tunis or Cairo. The outraged projections are rioters and with their convergence a spectacle of collective rebellion momentarily disrupts this mournful blockbuster.

The most ostentatious camera movement in Mike Leigh’s excellent new film, Another Year, is a pan along one wall of Battersea Power Station that discovers Tom (Jim Broadbent) at work as an engineer. The shot’s expansiveness is paradoxical because the building’s trademark chimneys are never shown and furthermore Tom’s attention is fixed on clay samples being extracted from the ground. This double lack of interest in surroundings is characteristic of the director’s work in the last twenty years. The tendency is especially pronounced in the brilliant Topsy-Turvy, whose only exterior is a dank alleyway. In other films, Leigh mostly stays within a tight perimeter—a home, the roads outside, perhaps a small garden. If characters go shopping or they meet for a drink, there is almost never an establishing shot of a wider urban setting. This myopic style is evident even in Naked, despite the fact that its malevolent protagonist prowls the capital’s streets. The sense of enclosure or incarceration is so pervasive that the opening sequence of Happy-Go-Lucky is very disorienting: we actually get a little tour of landmark London as Poppy (Sally Hawkins) cycles from the city center to Blackfriars Bridge, St Paul’s Cathedral visible in the distance. But even here the vista is curtailed; as she jauntily pedals, Poppy is squashed by the narrowing box in which the titles designer has placed her.

This visual constriction must have something to do with the disappearance of political commitment from Leigh’s films. In an unusually protracted outdoor scene in 1988’s High Hopes, Cyril (Philip Davis) and Shirley (Ruth Sheen) visit Marx’s grave in Highgate. Cyril intently ponders the monument’s radical inscription—“The philosophers have only interpreted the world in various ways, the point however is to change it”—and he grows dejected: “The thing is, change what? It’s a different world now, innit? By the year 2000 there’ll be thirty-six TV stations twenty-four hours a day telling you what to think. It’s pissing in the wind, innit?” After this, only the displaced traces of politics remain, as inconsequential as the Che Guevera print visible on a bedroom wall in Another Year. “I suppose on a clear day you can see the class struggle from here,” jokes Hannah (Catrin Cartlidge) in Career Girls as she looks out of the Thames-side window of a yuppie apartment. Nicola (Jane Horrocks) in Life Is Sweet wears a “BOLLOCKS TO THE POLL TAX” T-shirt, but the sentiment does not appear to run very deep because her mother comments, “you should be joining one of those socialist wotsit groups or the nuclear disarmament whatever, but you don’t.” Like so many other Leigh characters, Nicola is self-destructive and inert, prone to bingeing uncontrollably on junk food. Only Vera (Imelda Staunton) in Vera Drake really breaks with the norms of apathy or obsessiveness. Asked by the police why she offered young women illegal abortions she replies with anomalous conviction: “they need help.” Yet Vera Drake is set in 1950 and in this respect does not contradict the notion that politics in Leigh’s films had an expiry date sometime around 1988.

Imelda Staunton returns for a grim cameo in Another Year as a depressed woman who visits therapist Gerri (Ruth Sheen again), Tom’s wife. Asked by Gerri what single thing would improve her life, she answers, “A different life.” (Gerri’s response has a sour undertone of accusation: “A different life. Change is frightening, isn’t it?”) Staunton’s character leads a miserable parade. Tom’s brother is stupefied and his nephew seethes with unexplained grievances. Two friends, Mary (Lesley Manville) and Ken (Peter Wight), are drunks. Each of them in turn loses control after dinner with the couple. The scenes mirror one other: both characters, for example, discuss their lack of holiday plans (Mary is likably jovial, Ken maudlin). Leigh treats the pairing with a disconcerting dramatic irony: the characters receive unequal treatment. It is true that Ken is a lifelong friend while Mary, a secretary at the clinic where Gerri works, is a more casual acquaintance, but the difference does not fully account for an inconsistency in Gerri’s conduct. Speaking under the influence, Mary rues a failed relationship: “I blame my big heart,” she says and receives a cold reply from Gerri: “Well, we all have to make choices, don’t we?” But later Gerri discusses Ken with Mary, observing: “He’s got a good heart. Life’s not always kind, is it?” Choice, it seems, does not have quite the same part to play in his case.

“We created, built a world for ourselves,” Cobb recalls, referring to the years he and Mal spent in their dream-within-a-dream, and the same can be said of Gerri and Tom. Nothing is allowed to destabilize their inane chatter, family rituals, and reproachful hospitality (the churlish nephew, who may see the couple more clearly than others do, refuses to accept booze provided by them). After Mary makes a fool of herself with a bout of jealousy, she is banished. Gerri and Tom discuss the episode in bed. “Very sad,” he says, not sad at all. “Really upsetting,” she agrees, showing no sign of being upset. He continues, “Yeah, are you surprised?” She responds, “Course I am; no I’m not actually”—and with that the whole business becomes an opportunity for self-congratulation, reinforcing the couple’s insular domain which not only keeps the outside world at bay but also is far less welcoming, and more punishing, than it pretends to be.

Another Year ends with an extraordinary and desolate shot. Mary, hungover and abject, has been allowed to cross the domestic threshold once more and she joins the couple, their son, and his girlfriend for a meal. While Gerri and Tom rehearse for what might be the thousandth time a story from the early days of their marriage, the camera slowly moves toward Mary until she is confined alone in the frame. The shot holds on her daunted expression and then all sound fades away, an extreme acoustic version of Leigh’s cramped framings. The world around Mary has been cut off and replaced with a prison house of silence.