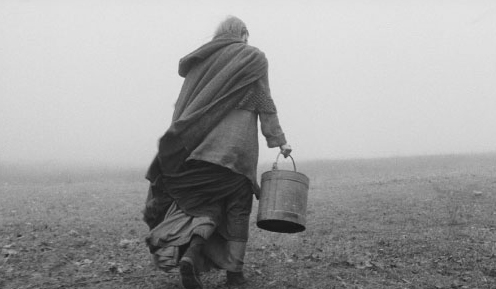 The head of a snorting horse juts into view and is abruptly jerked upwards by its as-yet-unseen rider. The camera, traveling at a galloping pace that matches the animal’s, pulls back to reveal the cart the horse is pulling while its owner (János Derzsi), an elderly man, unforgivingly wields his whip. As the camera moves, in a continuous take, out of close orbit of the cart to capture the vehicle in full view, hurtling along a dirt track, the surrounding landscape is disclosed as stark countryside. Wind picks up dead leaves and flecks of dirt which swirl around the horse and man. The mood is of wintry desolation, captured in monochrome photography that is not so much black-and-white as degrees of gravestone grays.

Lasting several minutes, this sequence of long-take virtuosity opens Béla Tarr’s The Turin Horse, which played in competition at the 2011 Berlin International Film Festival (February 9–19). It is customary to bemoan Berlin’s official selection, and, with a few notable exceptions such as Paula Markovitch’s The Prize and Ulrich Köhler’s Sleeping Sickness, this year was as lackluster as recent editions. The world premiere of Tarr’s much-anticipated film may then have occasioned mixed feelings for artistic director Dieter Kosslick. Long delayed, thanks partly to Tarr’s famously exacting shooting style, The Turin Horse is an exemplar of the formally stringent, serious-minded auteur cinema that Berlin is routinely criticized for ignoring in favor of more red-carpet-friendly fare. So while the film’s appearance in competition was a coup for the festival it also served to throw into relief the weaknesses of the rest of the program.

The title is taken from an anecdote told in voiceover during the film’s black-screen prologue. In 1889 Friedrich Nietzsche, then staying in Turin, witnessed a cab driver beat his horse. The philosopher intervened and threw his arms around the animal, before collapsing. He took to his bed and succumbed to madness until he died eleven years. “Of the horse,” Tarr’s unseen narrator tells us, “we know nothing.”

For the next two hours, Tarr’s film stays with the horse and coachman. Still battered by the wind, the old man—identified as Ohlsdorfer in the credits—reaches an isolated stone cottage where he and his grown daughter (Erika Bók) settle the horse in its stable with a practiced and weary sense of habit. Echoing the sinuous rigor of the opening sequence, Tarr and his cinematographer Fred Keleman’s Steadicam encircles the man and his daughter as they release the horse from harness, open and shut the wind-rattled stable doors, and pass in and out of the unlit barn.

The rest of the film is mostly restricted to the dim interior of the one-room shack. The subsequent six days unfurl in only twenty-eight shots that explore this peasant couple’s environment in elegant, gliding movements attuned to the sluggish rhythms of the characters’ activity. The environment is bare, the principal features of the household a table, two beds, some heavy wooden chests, an outside well, and the stable. You might say Tarr’s narrative approach is similarly stripped of ornament. Dialogue is kept to a minimum, mostly restricted to gruff instructions delivered by Ohlsdorfer and received without complaint. A strong sense is conveyed of a grinding daily domestic routine that must have been established years ago. She helps the man undress for bed, the business of pulling off his tight leather boots an especially drawn-out affair. When he awakes the next day, she helps him dress. Dinner is a boiled potato: lame in one arm, the man breaks the skin with his good hand, flattens it in a single blow, and greedily picks at the steaming flesh. She fetches water from the well. They retire to bed as night falls.

Over the next days, the two of them return to these tasks—joylessly, mechanically—and the durational demands of Tarr’s long-take shooting style communicate the severe monotony of peasant life. Yet this portrait of subsistence living exerts its own fascination, one derived from an hypnotic interplay between repetition and variation. As the week progresses, Tarr introduces disruptions to the couple’s ordered existence. These are initially small, unexplained changes; on the second day, for example, the horse refuses to work. As the week progresses, however, there is a gathering sense of disturbance that hints at wider chaos beyond the constrained world of the Ohlsdorfer cottage. A neighbor appears at the door to buy alcohol, the endless wind blowing outside. The nearby town, he announces matter-of-factly, has blown away; he then delivers a despairing speech about their godless and debased world, before staggering off, drunk, into the roaring gale.

Apocalypse advances nearer over the coming days. A band of Gypsies—whose depiction as harbingers of disaster feels provocatively close to ethnic stereotype—arrives to draw water from the well and is shooed away by the daughter. The next day the well is empty. The horse now refuses to leave its stall, or even to eat or drink. Ohlsdorfer decides that they should flee, but when they try to do so they are driven back either by the fierce elements or just a crumbling of will power. The wind grows even stronger and the landscape glimpsed outside seems to sink into a pale obliterating mist. Then on the final day, their world is plunged into darkness. The oil lamps won’t light, despite being full of fuel. The final image is of the old man and his daughter sitting down, curtained by impenetrable black, to eat what may be their last meal. It is hard to miss the Nietszchean resonances of this tale of encroaching darkness and diminishing hope; just as one can’t miss the Biblical parallels to the movie’s seven-day account of the disintegration and dismantling of the natural order—a pastiche, and corruption, of the creation myth in which God is utterly absent by the seventh day.

Tarr’s films are not for everyone; their arthouse purism is encapsulated in the trailer for The Turin Horse: a single fixed shot of an oil lamp, the flame flickering and dying against a black backdrop. Such a minimal approach has little commercial potential but those who have the patience will surely feel the mesmerising power of Tarr’s uncompromising vision. In The Turin Horse everything that makes existence bearable or even simply liveable is stripped away, leaving Ohlsdorfer and his daughter to face a terrifying void. The director has said that this is his final film and, if this proves to be the case, we will have been left with a most unconsoling farewell to cinema. Leaving his characters suspended on the edge of an abyss, Béla Tarr withdraws. At the end the screen goes black. The Berlin auditorium seemed to remain in darkness for an uncomfortable duration and it was hours before I could shake the twilight spell of this majestic film.

Edward Lawrenson is a program consultant for the BFI London Film Festival.