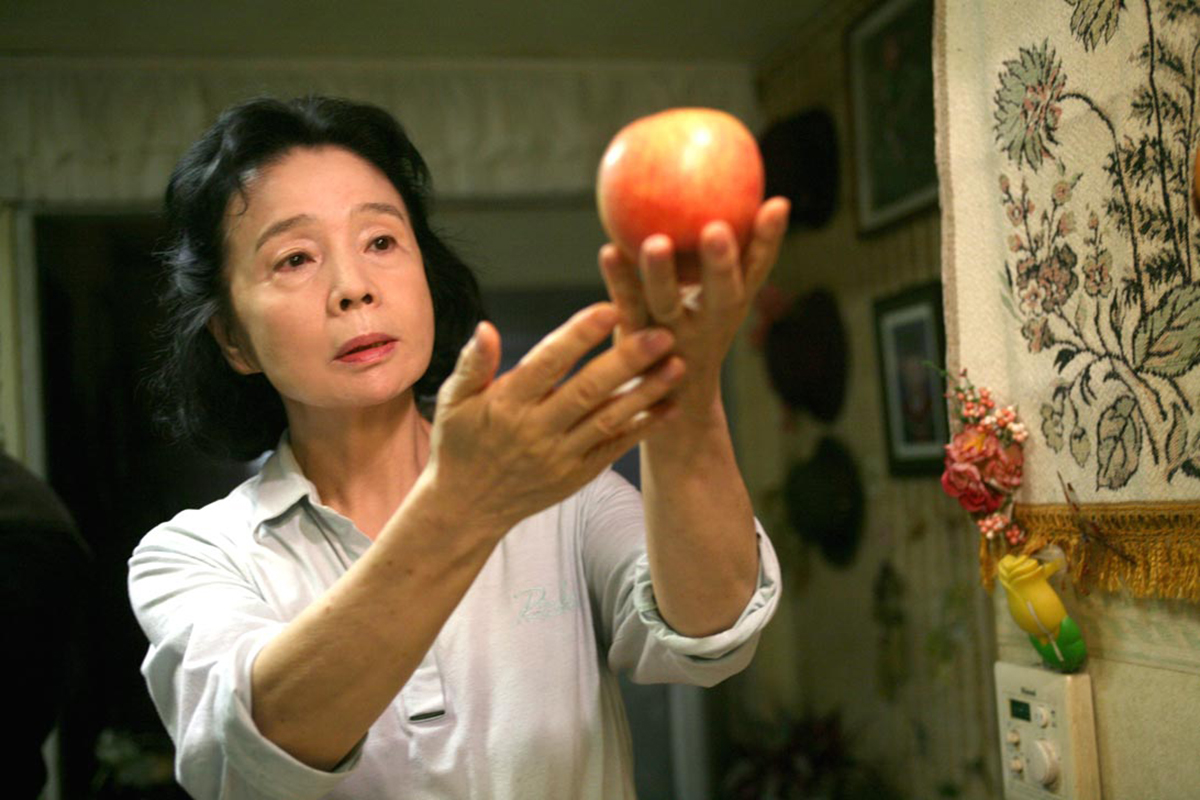 Source Code should have been entitled Lieutenant Stevens Who Can Recall His Past Lives . . . and if the film’s rewrite-history temporality is ever invented, perhaps one day it will have been.
* * *
Lee Chang-dong’s glorious new film is a major step forward for an already accomplished Korean director. Whereas his previous films are dominated by harrowing psychic and linguistic breakdowns, Poetry involves emotional restraint and a profoundly moving emphasis on eloquence. And while trauma in the earlier films leads to isolated suffering, in Poetry there is solace in a strange, spectral companionship.

“I am in so much pain,” says the bereaved mother in Secret Sunshine (2007), and she is not the only one. In Green Fish (1997), an apprentice gangster messily commits a murder and afterwards calls his brother from a phone booth. He tries but fails to fight back tears, his voice trembling as he reminisces feverishly about a fishing trip. Later another character finds an old photo that upsets her so much she writhes around desperately in her seat. Peppermint Candy (1999) begins with suicide; a close-up shows the protagonist howling in front of an oncoming train before the reverse-chronological narrative relates scenes from the etiology of his torment. An accidental killing during the man’s military service is the final trauma to be dramatized—except that the film’s coda shows him quietly crying for no good reason. Perhaps what burdens him is not ordinary grief but some primal angst that predates any horrifying experience.

Time and again in Lee’s films the misery is such that it disrupts speech, reduces it to mere screaming, or makes any communication simply impossible. The man’s wife in Peppermint Candy starts to sob while saying grace at a family meal and is hardly able to get the words out: “May this family…continue to love…each other.” The disabled woman in Oasis (2002) is so unnerved in a police station by false accusations leveled at her lover that she loses any ability to protest vocally. All she can do to try to express herself is maneuver her wheelchair with all her strength into the furniture; but no one understands. Having briefly found religious consolation after the death of her son, the protagonist of Secret Sunshine relapses into wild agony when the child’s murderer himself professes a newfound Christian faith. She shrieks at the sight of an earthworm in her kitchen and later, dazed and weak from self-inflicted wounds, wails as she staggers along a dark street. (She gets help but nothing suggests that her grief will ever abate.)

Poetry opens with the body of another dead child, a schoolgirl called Agnes, drifting downstream. When her mother watches in shock as her daughter is unloaded from an ambulance, an elderly woman walks past. This is Mija—played in an absolutely transfixing performance by Yun Junghee—who will soon learn that her grandson, whom she is raising, was one of several boys who repeatedly raped Agnes in the months leading up to her suicide.

The fathers of the other boys gather at a restaurant to explain the situation to Mija and request she pay a share of the financial settlement which, if accepted by the mother, will allow the assaults to be kept secret. The silence with which Mija responds to this corrupt proposition is entirely different from the inarticulacy to be found in Lee’s other films— instead of trying but failing to communicate, she simply refuses to. She goes outside to study a flower, penciling in a notebook while she does. It is not that she is repudiating what she has heard—she will confront her grandson more than once with what he has done and plead with him to acknowledge the crimes—it is that, as will become clear in Poetry’s conclusion, she feels a duty of remembrance toward Agnes that is at odds with this coverup.

Mija is taking notes for an introductory poetry class she attends. Lee depicts her artistic milieu in a gently comic fashion: at an open-mic evening, one participant makes rude jokes while another confides, “I wrote as if I were a flying butterfly”; a famous Young Turk who shows signs of being rather drunk grandly announces that “poetry deserves to die”; there is a good deal of pontificating about flowers and fruit. The self-improvement subplot thus often seems like light relief from the intricately constructed main story of the conspiracy to obtain impunity for the boys (which leads to unexpected acts of blackmail and betrayal). Yet the comedy is misleading, a brilliant manipulation that allows Lee to spring a devastating surprise in the form of the poem, “Agnes’ Song,” Mija eventually writes. This composition gives a sudden new significance to an earlier scene in which Mija tells fellow students about playing at the age of three or four with her older sister in a room whose drawn curtains let in only a shaft of sunlight. As she recollects childhood, Mija starts to cry but her sorrow does not, as in other Lee films, impair her speech. Mixing tenses, her language fluently binds past and present together: “Now I can see half of my sister’s face. The other half is hidden in the shadows. I think she dressed me in pretty clothes. ‘Mija, come here, come here,’ she is saying, clapping her hands. I am tottering to her. Although I was so little, I knew my sister loved me as she told me to come to her. I felt so good.”

Having treated the poetry theme playfully, at the end Lee elaborates it with a sublime tragic intensity. Mija disappears as the closing audiovisual montage, which is cinema’s distinctive method of recalling the past, gets underway. The last of her is her voice—before it is supplanted in a breathtaking sound edit that needs to be heard rather than described—reading out “Agnes’ Song.” As it unfolds, the poem and its accompanying images evoke the schoolgirl’s journey to the river bridge together with Mija’s own, more recent walk along “an old path resembling my father’s face.” The childhood memory recounted in the classroom is transformed in the process. Mija steps into her sister’s place as she reaches out to Agnes across the “black river” of time and death—”I pray…for you to know how deeply I loved you”—and for whatever it is worth imagines that as Agnes stood in anguish high above the water, she nevertheless felt some phantom trace of what a sick, lonely, staunch old lady remembered feeling more than sixty years before, in a room full of joy and shadows.