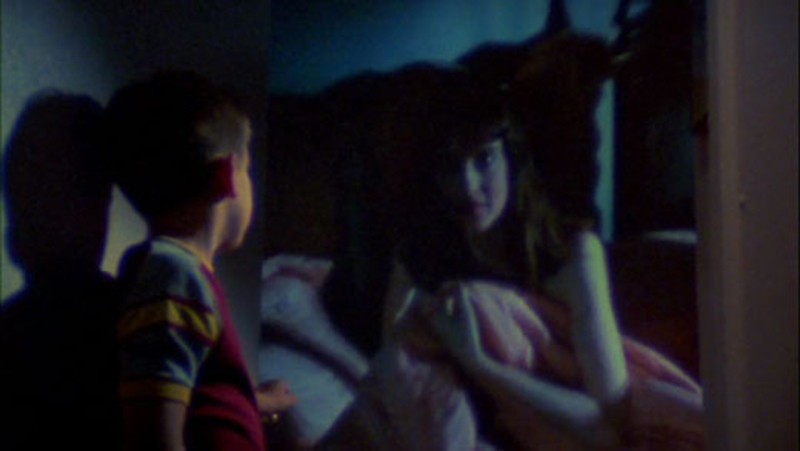 Poison tells three tales about ostracism. In “Horror,” an experimental serum turns an overzealous scientist into a plague-carrier; this storyline is filmed in the style of trashy “psychotronic” B-movies such as Glen or Glenda and Carnival of Souls with a touch also of Samuel Fuller (on the DVD’s commentary track, recorded in 1999, director Todd Haynes calls the black-and-white look “dank, cheesy”). Luridly colorful by contrast, “Homo” is a free adaptation of Jean Genet’s novels Miracle of the Rose, Funeral Rites, and The Thief’s Journal as well as the short film, Un Chant d’amour; it is a bitter romance involving two reformatory boys reunited in an adult penitentiary. “Hero” is a parody of sensationalist TV documentaries, a talking-heads investigation into how a troublemaking seven-year-old, Richie, came to disappear from his Long Island suburb in astonishing circumstances.

There is an element of camp satire in all three strands—“Hero” is especially amusing as we discover Richie’s taste for erotic mischief—but Haynes leaves the humor behind as Poison progresses, intercutting more frequently between the stories in the last third of the film to bring out themes of isolation and raw despair. In an interview with Justin Wyatt published in the spring 1993 Film Quarterly, Haynes confirmed that he wanted playfulness to give way to pathos—“I think what makes Poison really work for some people is that it gets under your skin and makes you feel something … very sad or disturbed”—and the poignancy is particularly pronounced at the end, when Richie flees his family. (The commentary reveals the inventive use of rudimentary equipment to achieve the stunning Super 8 aerial shot of the boy’s departure that concludes the film.)

The 1991 director’s statement reprinted in the booklet accompanying the splendid twentieth-anniversary reissue of Poison indicates what Haynes valued in Genet’s work: “Genet held the world permanently in contempt, vowing from an early age to reject it as it had rejected him. And his resolve is still inspiring to me … I think it encourages you to consider your own participation in systems of division and in the imposition of laws that make transgression, at times, a necessity.” What Poison does, accordingly, is to link Genet’s penal milieu to the ordinary world. “Homo” and “Hero” are complementary: homes are prisons too. If Haynes thus domesticates outsider fiction, it is in order to suggest that the mainstream cannot be separated from its criminal counterpart. The way the problem of oppression is widened to encompass traditional, law-abiding social institutions is made beautifully clear in the commentary during a scene in “Homo” in which one inmate tentatively starts to caress another. Haynes remarks: “I love this scene because I think it’s just something that everyone’s experienced in some way or other: sleeping beside someone you desire when you’re in camp or whatever, and feeling all of that tension and excitement.” This comment will only seem incongruous or sentimental if its premise is not recognized: that camp and jail are in some ways the same place.

The DVD additionally includes video of a 2011 Sundance Q&A in which Haynes talks about another aspect of his approach to adaptation: “We were at this sort of crossroads of the Aids era and I felt like things that Genet might have to say about what was happening in America was something I craved … So I stepped in and did my own interpretation and my own Americanization of ideas and perspectives that I gleaned from his work.” This transfer between cultures also occurs in relation to another European radical, Rainer Werner Fassbinder, whose work is specifically referenced in “Horror.” At one point the contagious doctor and his devoted companion eat at a sidewalk table. As Haynes notes in the commentary, this was inspired by the scene in Ali: Fear Eats the Soul in which the protagonists go for a meal at “Hitler’s favorite restaurant” in Munich, Osteria Italiana. The appropriation in Poison is almost pastiche. Relocated to the fictional city of Centerville, Fassbinder’s scene is made amusingly commonplace: in the original, the diners order lobster soup, caviar, and Chateaubriand; in Poison, the meal is hot dogs with sauce. But the “Horror” scene is also edgy—bystanders glare menacingly from across the street—and it thus stays true to something Haynes says about Fassbinder in an excellent short 2006 interview included in the Arrow Films edition of Fear Eats the Soul: “these [films] are about people trapped in houses and social morality, and I think he saw that that’s where we all intersect as subjects in a corrupt society under the auspices of moral, domestic culture.” Fassbinder’s scene is Americanized and slightly spoofed in Poison—ketchup substitutes for caviar—but both dramatize hostility directed at those who do not comply with social norms.

An intertitle Haynes wrote for Poison sums up how fundamental the director’s critique is: “A child is born and he is given a name. Suddenly, he can see himself. He recognizes his position in the world. For many, this experience, like that of being born, is one of horror.” The social experience, beginning at home, is formulated as an experience of constraint and anxiety. This bleak world view is softened in Poison with genre jokes and satirical wit, but it emerges with full force in the tormented speech the scientist gives at the close of “Horror” and, too, in the last scenes of “Hero,” in which I detect an echo of a third rebellious European artist, Jean Cocteau. I am thinking of the superbly composed shot in which Richie discovers his mother in bed with a local gardener. In the foreground of Haynes’s image, Richie is turned away from us, holding open the bedroom door, while in the rear-projected Super 8 background his mother returns his gaze in alarm. The unusual composition is strikingly similar to the scene in Orpheus in which the eponymous character retreats from the underworld accompanied by his guide, who has his back to the spectator. The departure of Cocteau’s character entails more than one sad farewell but, as in Richie’s case, it is nonetheless a farewell to hell.