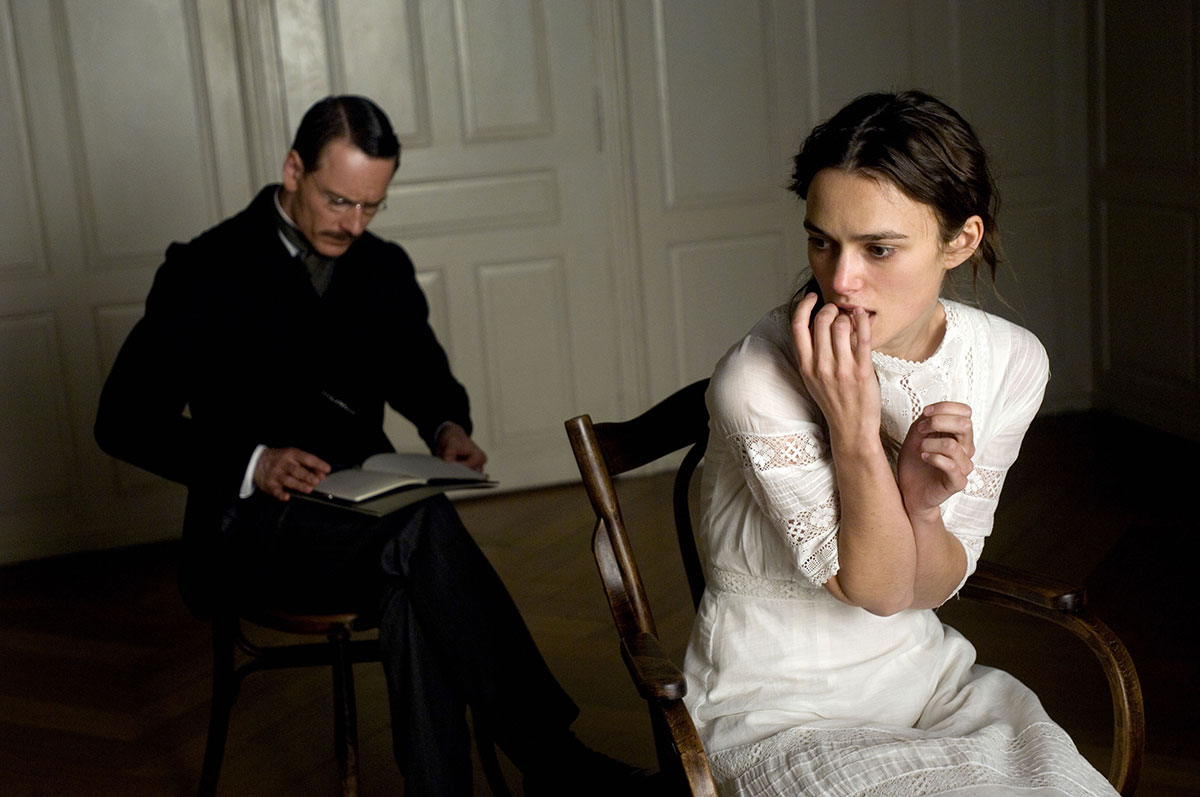 David Cronenberg’s new film, which opened November 23 in limited release, tackles a subject that, on the face of it, doesn’t seem a promising one for a movie: the history of psychoanalysis. Adapted from the 1993 stage play, The Talking Cure, by Christopher Hampton (who wrote the screenplay), A Dangerous Method dramatizes several intersecting relationships as they develop in Zurich and Vienna (and, briefly, on a journey to the U.S.) between 1904 and 1913. In October, during the New York Film Festival (September 30–October 16), MEGAN RATNER interviewed the director. This review incorporates some comments taken from that discussion, which will be published in full in the spring 2012 issue together with other writing about Cronenberg.

At the center of the emotional and intellectual geometry of A Dangerous Method are Carl Jung (Michael Fassbender) and his patient Sabina Spielrein (Keira Knightley), a woman so afflicted when she first consults Jung that she can only speak with effort. But she responds to Jung’s prototype of psychoanalysis, and, emboldened by his success, Jung contacts Freud (Viggo Mortensen), his mentor and (as the younger man sometimes puts it) father figure. Meanwhile Spielrein graduates from Jung’s patient to his assistant, and they embark on an affair that threatens both to cause a scandal and to discredit the psychoanalytic movement.

The actors bring an understated subtlety to the material: Mortensen is surprisingly laconic and light in the role of Freud, a far cry from the aggressive protagonists he played in previous outings with Cronenberg, A History of Violence (2005) and Eastern Promises (2007). Unhurried and assured, his portrayal of Freud reveals a man convinced of his own greatness but fretfully protective of the future of his intellectual creation. This undercurrent serves him particularly well in his single scene with Spielrein, in which their shared devotion to the movement eclipses even their shared affection for Jung.

In the role of Spielrein, Knightley is initially startling. Though her writhing and grimaces are credible, it’s her consistently spooked expression, electrified and unpredictable, that makes her performance more than bravado. Even sitting relatively still during her initial session with Jung, Spielrein seems just this side of chaos. Cronenberg explained to me that Christopher Hampton studied Jung’s own notes about Spielrein during a research trip to Geneva. Additionally, Cronenberg viewed early actuality films of women with similar symptoms. “They’re very difficult to watch,” he said, “because it’s sort of a willed deforming.” He worked with the actress to go as far as possible toward depicting such self-disfigurements without getting to the point that it would become too uncomfortable for the audience. By channeling Spielrein’s mania into keen focus, as in the scene where she and Jung measure word-association reaction times (on his wife), Knightley effects a delicate transformation from madwoman to rising analyst. From the outset, she looks for no sympathy, playing Spielrein as an experimenter, unafraid of risk to her body or mind.

Knightley’s performance insists on the physicality of her illness: she may have come for a talking cure, but there is no getting away from the body, especially when the relationship between patient and doctor becomes sexual. Jung is a man in conflict. He gets caught between professional ethics and desire, between married respectability and wild physical abandon, and it becomes increasingly hard for him to escape the contradictions. Though A Dangerous Method doesn’t deal very much with Jung’s spiritually inclined theories, Cronenberg mentioned to me on this subject that he has sympathy for Freud’s more physically conscious ideas: “I suppose one of the reasons that I would prefer Freud to Jung is that I think that Freud insisted on the reality of the human body at a time when the body was covered up by many stiff layers of clothing. Freud was saying: no, all of these orifices and fluids and things are of actual significance and importance to the human psyche whether we like it or not. Whereas Jung wanted to sort of flee the body and become a spiritual leader which I think is what happened. He became more like a religious leader than a physician, in my opinion.”

Fassbender’s Jung is faintly diaconal, his conscience soiled by the knowledge that he essentially lives off his wife. Fassbender interprets the character of Jung as both cunning and naïve, blind in large measure to the effect he has on Spielrein and on Freud, let alone the damage he does to himself. The actor turns his own sensuality into a willful boyishness, conveying a sense of Jung’s squeamishness about his desire for Spielrein.

Cronenberg manages to avoid all the risks of costume drama and theatricality: though two-handed, dialogue-heavy scenes often occur in the confines of an immaculately period-detailed room, the way in particular that the director uses close-ups to magnify heads and faces is always intensely cinematic. There are also expansive exterior scenes that add other dimensions to the film. Notable are sequences in which Jung and Spielrein, and then Jung and Freud, sail in a sloop bought for the younger man by his wife (and so a compact symbol of his conflicted life). The tranquility of these scenes is a source of dreamlike intermission.

Also striking is a sequence of scenes in Vienna on the occasion of the first meeting between the two doctors. They stride around the upper Belvedere Garden (which was designed as a representation of Olympus) discussing their great theories with excitement, and they seem at home in this locus of imperial power. During our discussion, Cronenberg told me, “I was really struck by the monumental element of Vienna, which I hadn’t really anticipated. It really was the seat of an empire that had lasted for many hundreds of years and they built it with that feeling. If you have that power, that strength you don’t have to be frantic, you don’t have to be hurried, you have the weight of gravitas, of centuries of empire.” Of course, since the film is set on the eve of World War I, the invocation of empire cannot help but also involve a sense of impending crisis, and this goes too for the friendship in A Dangerous Method between Freud and Jung, which seems for a while to be imperious and all-conquering until it starts to crumble.