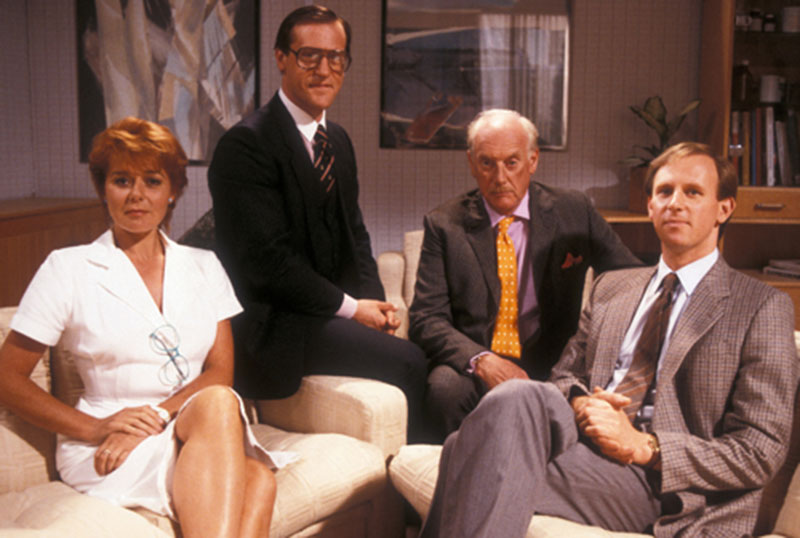 A Very Peculiar Practice is a BBC TV series first broadcast in 1986 (season 1) and 1988 (season 2), with a one-off special, A Very Polish Practice, following in 1992. The show was written by Andrew Davies, who later found fame for his TV adaptations of such literary classics as Pride and Prejudice (1995). Long unavailable, the entire series has just been released on DVD in the U.K. MARK FISHER looks back on this bleak satire of Thatcherism.

Much like his later adaptation of Michael Dobbs’s House of Cards, Andrew Davies’s A Very Peculiar Practice captures British society in a moment of transition. Where House of Cards caught the end-of-an era mood that accompanied Margaret Thatcher’s fall from power, A Very Peculiar Practice is set during the high pomp of Thatcherism. Centered on a fictional university medical practice, Davies based the series on his own experiences as a lecturer at Warwick University. That institution proved to be a laboratory for the new times; formerly associated with student radicalism, by the 1980s it famously became Thatcher’s favorite university. What Davies satirizes in A Very Peculiar Practice—especially the concerted attempts by unscrupulous administrators and ambitious academics to link research to corporate and military interests—is now taken for granted, and there’s a quaint charge about returning to a moment when such opportunism could be the object of mockery.

It’s not only the presence of Graham Crowden (playing Jock McCannon, the booming voice of a defeated radicalism) that makes A Very Peculiar Practice feel as if it’s an updating of Lindsay Anderson’s 1982 film, Britannia Hospital. Both the film and the series take a medical institution as the symbol (or symptom) of wider Britain; both approach their subject matter with a grim surrealism. But where Anderson’s film was formed in the militant heat of late 1970s industrial action that culminated in the 1978–9 Winter of Discontent that ushered Thatcher into power, A Very Peculiar Practice is set in a time when militancy has all but disappeared. The series’ mood of profound resignation is startling. We are thrown into a world in which privatization—of the university and the medical profession—seems unstoppable. There is some resistance to the corporatiation of the university, and the two business-orientated adminstrators who preside over the university ultimately face defeat at the end of the first and second series, but their demises feel like a hasty wish-fulfillment, out of keeping with the mordant atmosphere that A Very Peculiar Practice creates, as if Davies suddenly remembered that this was supposed to be a comedy.

When the series begins, the alcoholic McCannon is notionally the head of the practice, but it is clear that his time is over. The culture which shaped him—and notably the politicized psychotherapy of R. D. Laing—has long been in retreat. Whatever power McCannon once had is now faded: in an early episode, he pathetically misdiagnoses a severe case of appendicitis as homesickness. Narrating his book The Sick University into a Dictaphone, McCannon’s role becomes essentially choric (sometimes, as in the opening scenes of the second series in which he desolately trudges through a deserted, fogbound campus covered with trash, it is as if he has passed over into an expressionistic, mythic world). The two other doctors in the practice are Bob Buzzard (David Troughton) and Rose Marie (Barbara Flynn). Buzzard is the very epitome of the Thatcherite man, impatient with any concept of public service, hungry to transform the practice into private consultancy, and absolutely untroubled by any concerns about corporate influence. Rose Marie represents another kind of ascendant power. Polysexual, she refuses to use a patronym because to do so would be a concession to patriarchy. She is a manipulator who uses gender politics as a cover for an ambition every bit as ruthless as Buzzard’s. Yet for all their ambition, Buzzard and Rose Marie are inert figures, the energy of their Machiavellian scheming belied by their overwhelming cynicism.

Even though it is pretty clear that Davies’s satire is aimed at the exploitation of feminism rather than feminism as such, the line between the two sometimes gets blurred and this is a weakness of the show. Gender anxieties in A Very Peculiar Practice are always seen from a male perspective. The young doctor who arrives at the beginning of season 1 to take up a job at the practice, the troubled yet affable Stephen Daker (Peter Davison)—a 1980s man who isn’t sure how a man ought to behave—is very much the character with whom we are expected to identify, and the women who surround him are almost always perceived as threatening and unpredictable. Daker enters the practice with all the naivety and trepidation of K at the beginning of Kafka’s The Castle. Much like K, Daker has an eagerness and an enthusiasm which the other characters treat as a malady from which he needs to be cured. Also like K, Daker initially finds himself struggling to establish that he belongs in the strange new world he has entered. The practice receptionist assumes he is a patient, while Buzzard makes it clear that the practice had wanted to employ a more highflying figure who turned down the offer.

With the character of Daker, Peter Davison perfected his playing of a certain kind of English leading male. (Davison’s BBC roles in the 1980s included The Doctor in Doctor Who, 1981–84, as well as a long-running role in the rural veterinarian family drama, All Creatures Great and Small.) Daker combines anxiety with an underlying self-assurance. At the beginning of the series, his marriage has just collapsed, and his new lover, Lyn Turtle (Amanda Hillwood), both feeds and assuages his anxieties. In his dreams, he always sees Turtle running away, and Daker is ambivalent about her sexual, emotional and economic independence. Daker’s bewilderment and his apparent passivity make him a sympathetic character, but his likableness is bittersweet at best. For, by the end of the first series it is Daker rather than Buzzard or Marie whose career thrives. Daker is “modern” in the sense that, for all his anxieties—or rather, precisely because of them—he can adapt to and succeed in this new and hostile neoliberal world. In the second series, the English professor who rebels against the administration’s latest philistine scheme describes Daker as “a bit of a lefty.” but Daker is surely the very definition of a 1980s liberal: someone who is “sensitive“ rather than an unreconstructed sexist, someone who is somewhat sympathetic to radical causes, but who is in the end a pragmatist—someone, ultimately, who will do whatever it takes to survive.