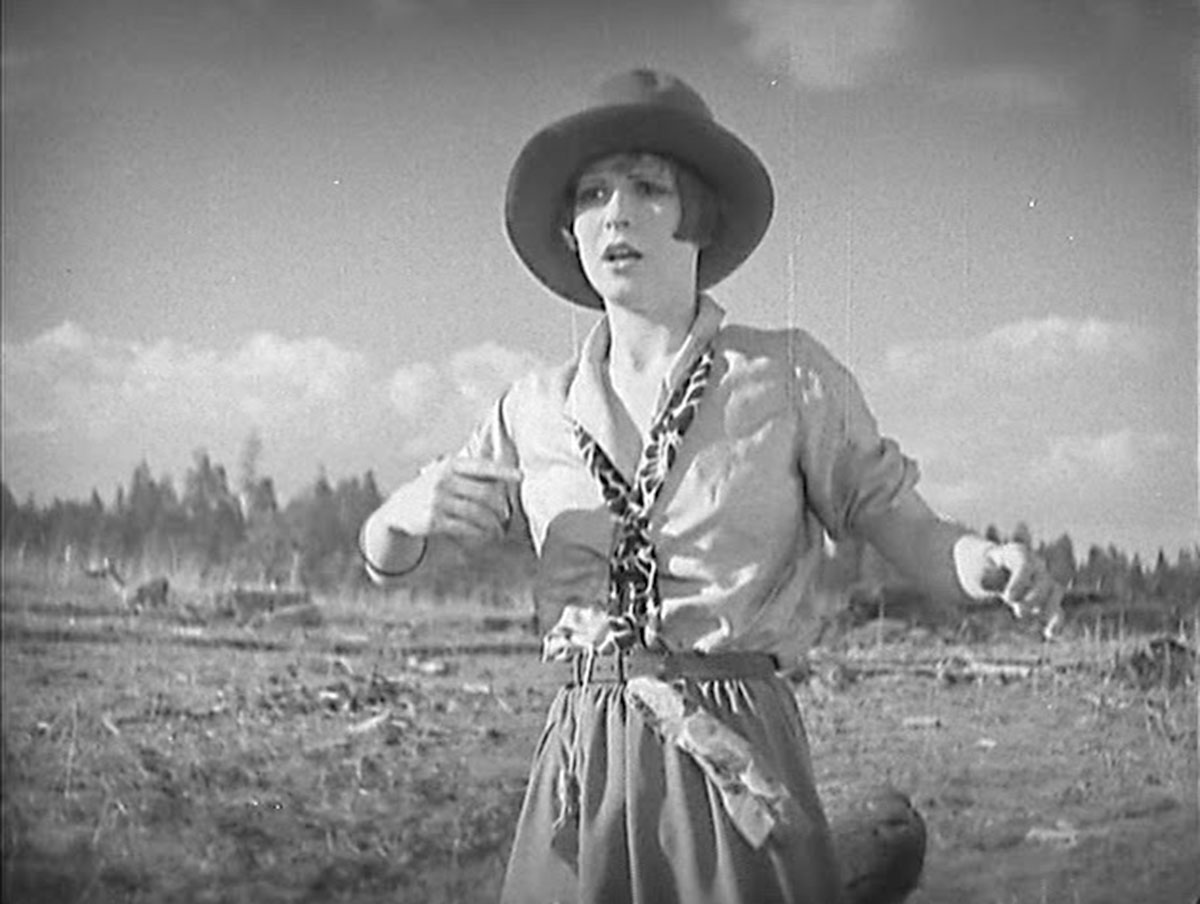 All the films presented in The West, 1898–1938 have some connection with the American West, but even so it’s an extremely heterogeneous collection. There are full-length feature films starring such major figures as Richard Dix and Clara Bow, early shorts by stalwarts of the Western genre such as Broncho Billy Anderson and Tom Mix, promotional films by public utilities and commercial companies, together with travelogues and documentaries and newsreels. Every film is of interest when seen within the context of the Western genre, even if the artistic quality is extremely variable.

Almost all the films date from the silent era, and some from the very earliest years. What’s fascinating is what they show about the nature of the genre itself. From our present-day perspective we tend to view the Western as a fairly coherent system, deploying a relatively small number of interlocking narrative structures, with instantly recognizable character types, decors, landscapes, and styles of speech; a world of its own, though one which has certain well-defined historical origins. But what is striking about the forty films in this collection is that, if all of them are in some sense Westerns, then the genre is a very loose and baggy form indeed.

Take, for example, The Tourists, a Biograph short from 1912, starring Mabel Normand and directed by Mack Sennett. In the early years of the last century, the Fred Harvey company in association with the Santa Fe railroad set up a string of hotels along the route through New Mexico (commemorated in the 1946 MGM musical The Harvey Girls). Travelers could stop off on their way to Los Angeles and take an “Indian detour” though the historic pueblos. They could also shop for souvenirs at the stores attached to the hotels, in which Indian craft workers—basket-makers, weavers, potters—plied their trade. It was a carefully cultivated image of the Indian as exotic, as picturesque, but one from which all threat had been removed. These Indians were not the bloodthirsty savages who peopled Western dramas, but living examples of the ancient cultural roots which Americans yearned to discover. (A 1926 documentary in this collection, The Indian-detour, sponsored by the Santa Fe railroad and the Harvey company, provides useful background to the comedy short.)

The perspective of The Tourists is, frankly, a demeaning one. The Indians, except for two leading roles, play themselves, but are the butt of a farce in which Mabel, shopping for artifacts, is mistakenly believed to have been throwing herself at the chief, thus incurring the wrath of the Indian women and chased around the village. No one comes out of it with any dignity.

The near-contemporaneous Last of the Line (1914) is very different. Produced by Thomas Ince, it’s an excellent example of the Vanishing American theme so prominent in art and literature at the time the movies began. A consensus had emerged that, whether you were pro-Indian and wanted to see them integrated into American society, or were anti- and wanted Indians eliminated, the Indian’s distinct and separate identity was doomed. This engendered a kind of nostalgia for what was deemed irrevocably lost. Ince’s film is remarkably sympathetic to the Indians’ plight. The chief’s son (played by the Japanese American star Sessue Hayakawa) has been sent off to be educated at a white man’s school. He returns ruined, a vicious drunk. To save the honor of the tribe, the old chief (excellently played by John Goodboy, one of Ince’s troop of Oglala Lakota recruited from the Pine Ridge Indian reservation) is forced to kill his son, thus dooming his line to die out with him. The scenes in the Indian village are acted with energy and conviction by the Lakota, and the compositions are dynamic.

The most sheerly enjoyable of all the films on offer is Mantrap (1926), starring Clara Bow and directed by Victor Fleming. The underlying structure of the film is familiar in the genre, centering on a clash of cultures between east and west. Percy Marmont plays Ralph, a jaded divorce lawyer from the city who is persuaded that a trip out west will revive his spirits. Meanwhile Alverna (Bow), a girl in a city barbershop, wins the affection of the unsophisticated but good-natured Joe (Ernest Torrence), who takes her back to his cabin out west. There, the incurably flirtatious Averna soon grows bored with the wide open spaces and begins to practice her wiles on Ralph, who is staying nearby. Eventually Averna has to make a choice, as Western heroines usually do, between civilization and wilderness, and persuades Ralph to take her back to the city with him.

Directed by Fleming with wit and verve, and with Bow at her most irresistible, Mantrap is an excellent example of a theme that has been a mainstay of Western narratives, the contrast between the west, rough but virile, and the east, sophisticated but effete. Developed in the writing of Theodore Roosevelt at the end of the nineteenth century, the comic possibilities of the theme were to be explored in films as diverse as Douglas Fairbanks’s The Mollycoddle (1919) and later in Cowboy (1958), starring Glenn Ford and Jack Lemmon. There are further examples in this collection. In Broncho Billy and the Schoolmistress (1912) the rough west and the cultivated east coincide with the conventional contrast between the masculine and the feminine. In this case the new schoolmistress proves unintimidated by Billy’s cowboy chums and faces them down. Billy himself is tamed.

In Womanhandled (1925) Richard Dix, who made a career from playing in such Westerns as The Vanishing American (1925) and Cimarron (1931), is a fashionable New Yorker who, smitten by Esther Ralston, pretends to be the kind of manly Westerner she admires. Hastily he adapts his uncle’s modern Texas ranch into something that corresponds to the myth of the west that Ralston has bought into, with comic results. The cowboys, accustomed to rounding up their cattle by automobile, have to be trained to ride horses, and the ranch-house made over with Western-style décor. Unfortunately the film does not survive in a complete print, but, directed by comedy specialist Gregory La Cava, enough is left to make this a valuable addition to the collection.

This theme, of the manliness of the west, even appears in documentary form, for example in We Can Take It (1935), one of the few sound films on offer. It’s about the work out west of the Civilian Conservation Corps, created by Franklin D. Roosevelt as a way of giving unemployed young men from the cities an experience of the outdoor life and the benefits of regimented but constructive work. Stripped to the waist, members of the corps smile happily for the camera.

Not all of these films are successful. The Western genre may have supplied coherent and vigorous narratives, but that was no guarantee of quality. In his valuable book The War, the West and the Wilderness, Kevin Brownlow makes much of The Lady of the Dugout (1918). The chief interest of the film is that the central role is taken by real-life bank robber Al Jennings, who plays himself in a story that purports to be based on fact, though Jennings is clearly one of a long line of Westerners with tall tales to tell, as the commentary provided by Bill Moore explains. It’s an artless, occasionally incoherent production, featuring Jennings as a sort of “good bad man” of the type established in dime novels about Jesse James and carried into the movies by Broncho Billy and William S. Hart.

Another film which features real-life Westerners playing themselves is Passing of the Oklahoma Outlaw (1915), in which famous lawman William Tilghman appears on the trail of notorious outlaw Bill Doolin. Tilghman had actually directed Jennings in an early two-reeler titled The Bank Robbery. This time he attempts to put himself center stage, but the film is unconvincing in its staging and the story difficult to follow, were it not for the helpful commentary, again provided by Bill Moore, from the Oklahoma Historical Society.

We are on surer ground with Over Silent Paths: A Story of the American Desert (1910), one of D. W. Griffith’s Biograph Westerns, photographed by Billy Bitzer. Mining is a common theme in the Western; almost invariably the lust for gold leads to crime. (The influential epic Western of the mid-1920s, The Covered Wagon, dramatizes the consequences of making a choice between mining and agriculture, seen as a more noble and productive calling, and this choice is reprised in Anthony Mann’s Bend of the River, from 1951.) In Over Silent Paths the daughter of a miner finds her father murdered and his gold stolen. Having fallen for the man who, unknown to her, committed the crime, she eventually unmasks him. Griffith makes excellent use of the flat and desolate landscape of the desert out west, as he did the following year in The Last Drop of Water.

A mining camp is also the setting of Salomy Jane (1914), a feature-length version of a Brett Harte short story. Harte was very popular with filmmakers in the silent period, being largely responsible for many of the stock characters who turn up in later Westerns; his story “The Outcasts of Poker Flat” was filmed by John Ford in 1917 and twice remade. Produced by the short-lived California Motion Picture Corporation, Salomy Jane has some impressive sequences among the redwood forests, and is the debut of Beatriz Michelena, whom the accompanying notes claim as the first American Latina movie star.

Much of the documentary material in this collection is in the form of travelogs, a mainstay of early film programs. We see tourists disporting themselves in scenic spots such as Yosemite and Yellowstone National Park. The popularity of the west was due in no small part to its vigorous promotion by those who had a direct interest in its development. In these charming little vignettes we see the west marketed as a playground, a land of spectacular scenery whose original inhabitants have been turned into picturesque accompaniments to the landscape, rendering them reassuringly safe. But when the west was viewed in the comfort of the cinema, far from the scenes depicted, the spectator could have the dangers delightfully reimagined, as for example in The Sergeant (1910), a Selig production which is the first surviving narrative film shot in Yosemite. An army sergeant and his commander’s daughter are marooned in Yosemite valley when a villainous Indian steals their horses. In the finale the cavalry ride to the rescue.

Many of the films in this collection have previously been thought lost, only to be rediscovered in far-flung archives in New Zealand and elsewhere. They have been lovingly preserved, presented with helpful commentaries, specially composed and appropriate music, and an accompanying book full of useful information. It’s an extremely worthwhile enterprise and amply repays the devotion and knowledge put into it.

EDWARD BUSCOMBE is the author of Injuns! Native Americans in the Movies (2006)