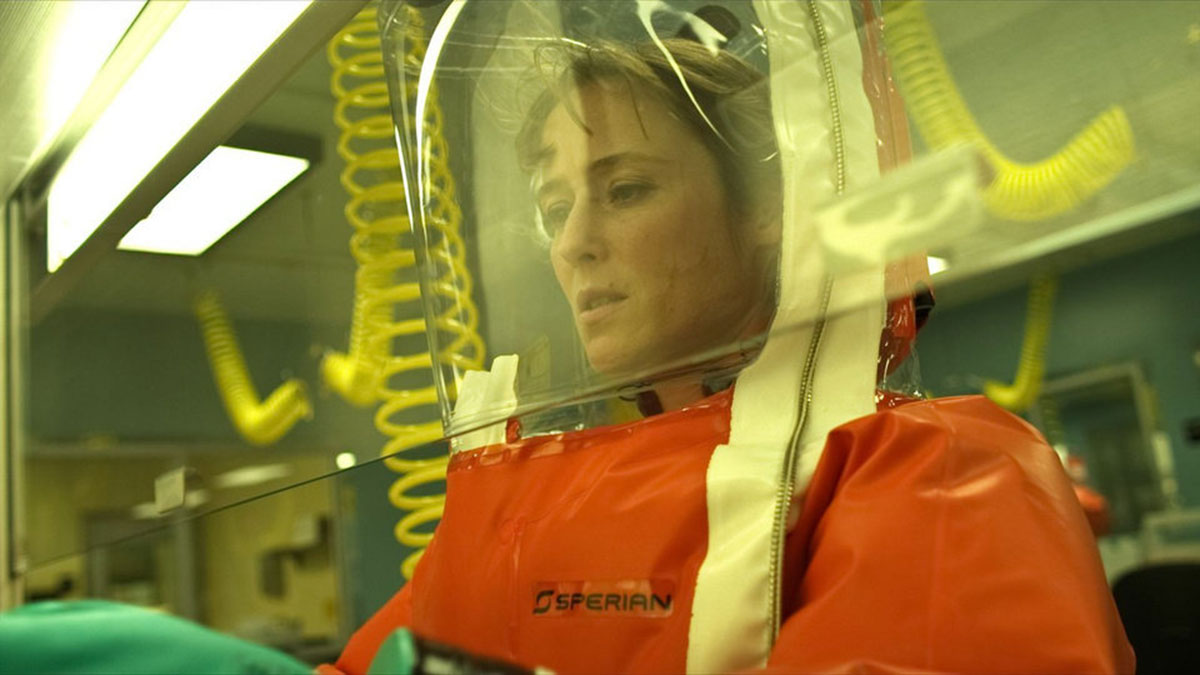 Since Marey’s motion studies at the end of the nineteenth century, film has been a tool for providing visible evidence, a record of things seen. The development of digital imaging technology over the past twenty years has transformed that original empirical function. Advancements in CGI enable convincing depictions of things impossible to see in everyday life: dinosaurs, hobbits, viruses. It has become necessary to speak of “hypervisibility” to describe the way movies can realistically render such previously hard-to-envision phenomena. Steven Soderbergh’s Contagion tries to contest this prevailing logic by insisting on the limits of visibility.

Contagion begins with a black screen and a cough; someone somewhere is sick—and spreading it—but we cannot see who. Characters spend much of the rest of the film staring into monitors, feverishly studying colorful computer-generated models of the mysterious virus or digital video of its victims, but however hard they look, their screens reveal only biological explanations for the epidemic. They inevitably exclude macroeconomic and social forces, which are even harder to picture than the microscopic disease but causally every bit as important. To represent the limits of visual inquiry, Soderbergh’s movie keeps its computer-generated models on monitors and within frames. By separating digital visual aids from the rest of the characters’ environments, Contagion indicates that seeing the virus—or even the moment of its transmission—can never fully explain the catalysts behind the epidemic. Digital models may help halt the spread of an outbreak, but they cannot convey why the virus entered the population. Ironically, Soderbergh does try to show us the forces behind these images, but in so doing, he runs into the same explanatory limitations as his characters.

As a medical thriller, Contagion participates in the venerable filmic tradition of searching for visual pleasure on—and even within—the human body. Writing about Contagion‘s nineteenth-century precedents, Tom Gunning invokes “the gnostic (from gnosis, knowledge) mission of early cinema” that imbricated “new methods for investigating the visual world” with the joys of spectacle (“In Your Face: Physiognomy, Photography, and the Gnostic Mission of Early Film,” Modernism/Modernity, winter 1997, 1, 3). In addition to Marey’s motion studies, “Fred Ott’s Sneeze” (1894) provides another important example of this early mixture of scientific inquiry and visual pleasure. A forty-eight-frame close-up of a lab assistant’s involuntary expulsion, the movie’s appeal comes from its framing. The close-up of the sneezing face captures the “microphysiologies” of facial musculature at work and turns the body’s compulsions into spectacle.

These edifying delights inspired subsequent filmmakers to imagine visual pleasures hiding beneath the body’s surfaces. By the mid-1960s, playful science-fiction films were using special effects to depict extraordinary internal environments. Fantastic Voyage (1966) and Innerspace (1987) employ spectacular sets and production designs to take us inside internal organs as foreign and mysterious as outer space. CGI continued this tendency to turn flesh into fantasy. However, the ease with which digital artists can peek beneath the skin has made flesh part of the story in a much wider variety of genres. Fight Club (1999) famously begins inside the brain of its protagonist; unpleasantly organic burblings and squelches introduce the camera’s zoom backwards along a neural path across the cerebrum, out a hair follicle, and up the barrel of a gun nestled in the protagonist’s mouth. More recently, 127 Hours (2011) travels inside its protagonist’s arm to underscore the difficulty of amputating a limb with a utility tool. Framed by reaction shots that convey the character’s suffering, the virtual camera shows the knife blade sliding through muscle to detach bone and tendon. Although a digital fiction, the effect is horribly believable: this must be what it really looks like to sever an arm. The sequence furthers our expectation of what computer animation can make visible. Blade: Trinity (2004) and the recent remake of The Thing (2011) similarly exploit CGI to portray viruses and aliens penetrating human cells. These movies teach viewers that computers can render truths our senses cannot, a proposition Contagion openly questions.

After its enigmatic black screen, Contagion begins by disclosing the identity of its anonymous cougher. Beth Emhoff (Gwyneth Paltrow) sits at an airport bar, eating nuts and unwittingly spreading a deadly disease. The film then cuts between ailing travelers on public transportation systems around the world: a young man on a ferry in Hong Kong, a businessman on a flight to Japan, a Ukrainian fashion model in a taxi in London. Each quickly sickens and dies, and it is up to the U.S. Centers for Disease Control and the World Health Organization to identify the virus and curtail its spread. For the most part, the film’s various epidemiologists undertake this pursuit as an exercise in visual inquiry. Dr. Ally Hextell (Jennifer Ehle) captures the first digital image of the virus with an electron microscope and generates additional computer models to illustrate her search for a vaccine. The vibrant colors of these models engage the viewer’s eye even as Hextell admits their limitations: they cannot show us where the virus came from or how it developed. Dr. Leonora Orantes (Marion Cotillard) tries to track the virus’s route into the population by watching surveillance footage from the Macau casino where all of the aforementioned victims briefly came together. Yet each time Contagion seems to cut to this footage, mobile cameras and lurid colors reveal it to be a fantasy, an illusion rich with details security cameras cannot capture. Close-ups of Beth and her fellow revelers seem to reveal meaningful details about their demeanors and physical contact, but the security cameras do not have access to such intimate angles. What we are seeing is the video record Orantes wants, not the one she has.

These fake-surveillance sequences start to undermine the premise that the virus can be understood if it is just looked at hard enough. Dr. Ian Sussman (Elliott Gould) reaches a similar conclusion in one of the film’s eeriest and most effective scenes. Seated in a San Francisco café after a long day in the lab, Sussman stares at the objects around him—a counter, a cookie, a glass—and begins to comprehend them as fomites (the inanimate surfaces over which viruses travel). Sussman is not accessing any new visual information; rather he recognizes the insufficiency of computer-generated imagery to explain this medical disaster. Like the black prologue, the café sequence suggests that there may be more to an epidemic than meets the eye. This point is made in a different way when Beth’s husband Mitch (Matt Damon) finds a digital snapshot of the moment the virus entered the human population but fails to recognize its significance. CGI encourages us to believe we can see everything, from the cosmic to the atomic, but simply seeing the moment is not enough.

Having thus begun to expose the limits of hypervisibility, Contagion concludes by seeking to show us an alternative explanation for the epidemic, the moment when corporate forces set off the chain of events that created the contagion. This final Rube Goldberg-ian sequence, which retraces the virus’s path to its human hosts, starts with a bulldozer tearing down a Macau forest to make room for a new factory. A series of chance encounters between a forest bat, a banana, a pig, and a chef eventually deliver the virus to Beth in the casino, but along the way, Soderbergh’s visual details particularize the global forces they invoke, ironically rendering such forces invisible again. Because it must find a way to represent transnational capital, Soderbergh’s final sequence participates in a logic of visible evidence that only leads to certain kinds of culprits—those which can be seen and identified—such as Beth Emhoff’s company, AIMM Anderson. Trying to depict the destructive power of corporate globalization, Soderbergh shows us an AIMM Anderson bulldozer tearing down a forest in Macau. The shot offers us a better explanation for the epidemic, but it also runs the risk that upon seeing a simple answer, we may forget that looking has its limits.