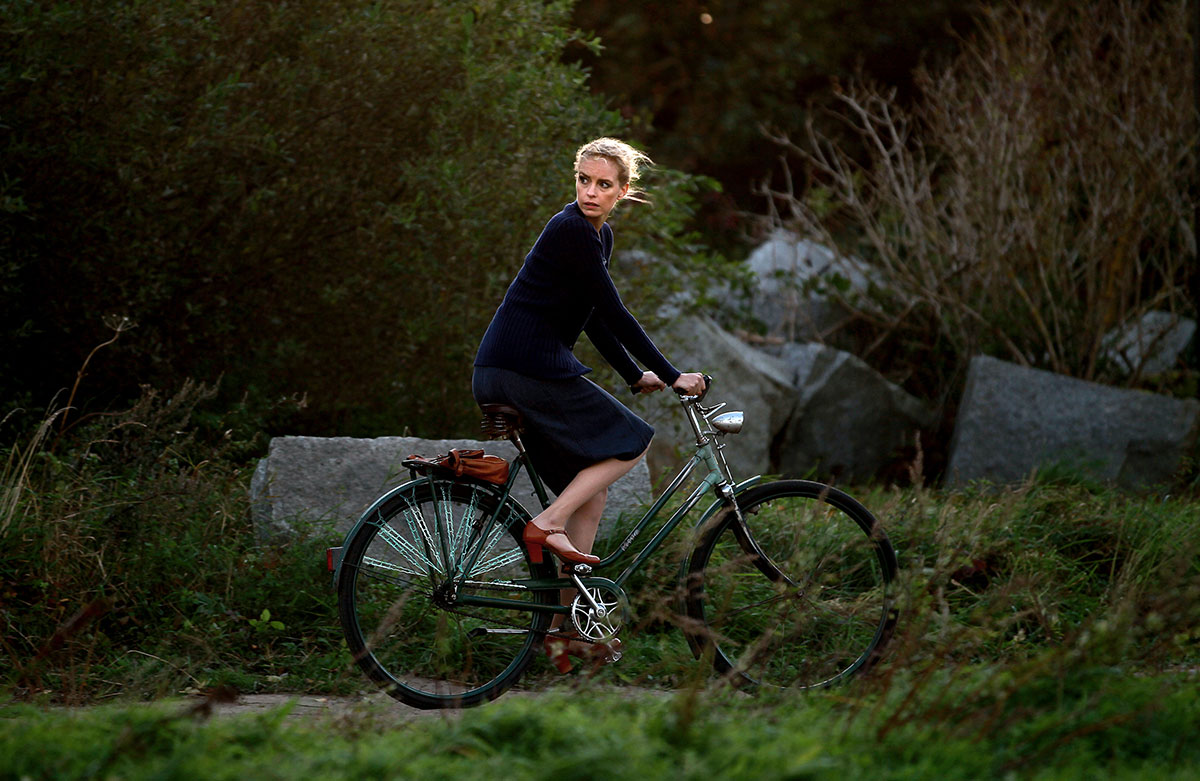 by BRIGITTA B. WAGNER

The 62nd edition of Berlin’s annual film festival, known as the Berlinale, ran February 9–19, and as usual featured a wide range of movies from around the world—from Angelina Jolie’s debut film as director, In the Land of Blood and Honey, a drama set in war-torn Bosnia, through films from East Asia such as Yong-hi Yang’s Our Homeland, to documentaries including Philip Scheffner’s Revision. BRIGITTA B. WAGNER, assistant professor of Germanic Studies and Film Studies at Indiana University in Bloomington, reports.

The 62nd Berlinale was replete with revisions and returns. The previous year’s news stories, notably Fukushima and the Arab Spring, made their way into various documentaries and fiction films; forgotten and rarely screened features from American avant-gardist Shirley Clark and Cambodia’s persecuted, 1960s–70s “Golden Age” filmmakers resurfaced. Retrospectives highlighted Soviet and German contributions to 1920s socialist and socially conscious cinema, the centennial of Germany’s legendary and controversial Studio Babelsberg, and the storied career of Meryl Streep, whose turn as Margaret Thatcher in The Iron Lady was shown out of competition. Miguel Gomes’s Tabu, Billy Bob Thornton’s Jayne Mansfield’s Car, Brillante Mendoza’s Captive, Zhang Yimou’s The Flowers of War, Wang Quan’an’s White Deer Plain, Stephen Daldry’s Extremely Loud and Incredibly Close, and a special screening of Angelina Jolie’s In the Land of Blood and Honey, among others, set the politicized tone of this year’s preoccupation with the past and its horrors.

Benoît Jacquot’s opening-night Farewell My Queen, adapted from Chantal Thomas’s historical novel, looks likely to become a heritage blockbuster. Set on the eve of the French Revolution, the action centers on the resplendent, doomed court life of Versailles as witnessed by Marie Antoinette’s favorite courtier, Sidonie (Léa Seydoux). Diane Krüger plays the queen, reluctant to leave the palace and her romantic friendship with Gabrielle de Polignac (Virginie Ledoyen). Like a more expansive variant of the country house in Rules of the Game (1939), Versailles’s long corridors, gardens, and spatial separation of classes provide ample opportunities for intrigue, desire, and misunderstanding. Complementing the film’s tableaux are its Kammerspiel scenes of luminescent close-ups of the film’s female leads. Jacquot and Thomas’s Versailles is a woman’s world of geopolitical melodrama, one in which love between women ultimately produces a revolution among men.

Seydoux also appears in Ursula Meier’s French–Swiss coproduction, Sister, which garnered a special prize in competition. A realist portrayal of the little-known world of Swiss poverty, the film follows Simon (Kacey Mottet Klein), a twelve-year-old con artist as he steals from rich ski tourists in order to peddle second-hand luxury goods to local children in the valley. Simon, suave and organized, supports himself and his older sister Louise (Seydoux), a young, confused woman who drinks as often as she switches partners and loses jobs. Both have constructed a daily existence around lies. Louise tells one boyfriend that her brother often stays with her because things are so bad at home. Simon befriends a wealthy woman and her sons, and spins tales about his affluent, busy parents, owners of a nearby hotel. When a resort cook catches him stealing skis, he invents a more dramatic family history—parents killed in a car crash—although a later, contradictory claim is more surprising and disturbing. Layers of resentment and longing, failure, desperation, and loyalty structure the relationship between Simon and Louise, and Meier renders these conflicts in subtle and moving compositions: a long shot of a boy selling skis at the roadside yelling at Louise to “keep her distance”; handheld shots of the two fighting bitterly in the dirt; a shot of him wrapping his arms around her in bed; and a long take of her crying as he looks on. Simon belongs to a tradition of troubled, marginal cinematic youth that also includes Rossellini’s Edmund (in Germany Year Zero), and Truffaut’s Antoine Doinel (in the sequence of features that begins with The 400 Blows); Meier’s tough yet tender adolescent protagonist survives not in the city, but in the alpine landscape overshadowed by cable cars and chair lifts that run in opposite directions—symbols of the opposing forces that play out in the characters’ lives. For one moment only, Simon is a child, swinging, carefree, on an abandoned T-bar, framed against the blue sky in a Switzerland that looks idyllic.

Truffaut’s daughter Éva appears in quite a different reflection on place screened at the Berlinale, Vincent Dieutre’s Jaurès. Part political documentary and part subjective memorial to a relationship, the film is named for the Paris metro station opposite the apartment of Dieutre’s former lover, also called Simon. As Truffaut and Dieutre discuss the man, who never appears in the film, they sit in front of a screen with images shot from the windows of his apartment, where Dieutre would regularly spend the night and eat breakfast. The images, limited in their vantage point, record the world outside, including a makeshift camp of Afghani refugees under a bridge and along the Canal Saint-Martin. There are two stories that Truffaut and Dieutre’s dialogue seek to extract from these surveillance-like images: memories of a daily routine with a man of whom Dieutre has no photographs and the plight of the young men opposite, whose fate is uncertain. This duality of meaning shifts back and forth as the images either fill the whole screen or appear projected in front of the two narrators, positioned before microphones. As Dieutre reverts to specific camera angles, specific windows, the spaces and people also become familiar to us. The more we see again, the more we look for and the more we find in apparently banal street scenes.

Philip Scheffner, whose Halfmoon Files debuted in the festival’s Forum section in 2007, returned to that section with Revision, a stunning documentary that takes issue with the official history of a xenophobic incident in Northeastern Germany in 1992. Unearthing the case of Grigore Velcu and Eudache Calderar, two Romanian refugees killed mysteriously in a cornfield along the German–Polish border at a time of intensified post-Wall racism, ethnocentrism, and illegal border-crossing, Scheffner uses a wealth of nonfiction techniques to question the occurrence, its aftermath, and the changing contours of Europe. The families of the two men stare into the camera and argue with Scheffner about the best way to film their interviews. Subjects listen to their earlier audio recordings and add commentary or memories on camera. In other scenes, Scheffner stands with farmers and firefighters in the cornfield itself as they map and dispute the way that the bodies were found much as Claude Lanzmann’s subjects do in Shoah (1985). Lawyers, a doctor, and a police officer complicate the story of three hunters who supposedly mistook Velcu and Calderar for wild boars while a Romanian chronicler searches his notes on the case and retrieves old news sequences. Scheffner shares some of the concerns of theorist–filmmakers such as Harun Farocki as he and cinematographer Bernd Meiners approximate the exact light conditions in the field on June 29, 1992. Scheffner includes their conversation on the soundtrack as they attempt to calibrate the video camera and a pair of hunting binoculars. This textually diverse revision of an embarrassing international incident, one too hastily swept under the rug of the more immediate concerns of East–West integration, remains, however, a human story with the profound insights of EU retrospection; Velcu and Calderar’s families no longer have to cross borders illegally.

This year’s directing honors went to Christian Petzold, a filmmaker associated with the Berlin School and one who is not averse to tackling the German past (The State I am In, 2000). If Florian Henckel von Donnersmarck’s Oscar-winning The Lives of Others (2006) provided an accessible melodramatic roadmap for late-GDR travails, Petzold’s Barbara, set in 1980, offers more subtle ways of looking back. Like Petzold’s Wolfsburg (2003), Ghosts (2005), Yella (2007), Jerichow (2008), and last year’s Beats Being Dead (2011), all shot by Hans Fromm, colors are important and in this case diorienting. In Barbara, the saturated yellows, blues, and greens hardly evoke the washed-out grayish tones of 1980s East German films; nor do the rural, coastal surroundings to which Barbara (Nina Hoss), an East Berlin doctor, has been transferred immediately signal a period piece. The Stasi officer (Rainer Bock) and local doctor (Ronald Zehrfeld) keeping an eye on Barbara’s wavering loyalty to the state do their part, but Petzold accomplishes a sense of claustrophobia more through the natural landscape with its menacing winds, crashing waves, open fields, and forests than through actual violence and state intervention. The good humans in this film are doctors, whose oath to save lives trumps the dehumanization of state surveillance. Even the Stasi officer, who classically looks the part, becomes the object of a compassionate gaze when his own wife gets sick.

In contrast, Yong-hi Yang’s first fiction film Our Homeland (following the documentaries Dear Pyongyang, 2005 and Sona, the Other Myself, 2010) is a stark reminder that some Cold Wars are not over. Set among Japan’s Korean minority, the film tells the story of the Japanese-born Sonho (Arata Iura), repatriated to North Korea as a teenager twenty-five years earlier. Suffering from a brain tumor, he is given the chance to return to his family in Tokyo for a three-month medical treatment. Yang’s film is one of restraint, characterized by emotionally brutal moments of Sonho’s silence and impotent rage. The director’s choice not to show North Korea makes Sonho’s encounters with modern Tokyo all the more haunting. Followed by North Korean escorts and under pressure to recruit his younger sister Rie (Sakura Ando) as a spy, he is neither able to communicate with his family about his struggles in the People’s Paradise, nor to truly enjoy his time abroad. Despite the premise, Yang manages to avoid kitsch. Instead, her strength is in visual approximations of impossibility and pain, in gestures, actions, and desires that cannot be fulfilled. At one point Songho joins his old school friends, sister, and first love at a bar. As the others reminisce, he is speechless. He moves away from the table to a stool in the foreground. They are all singing an old hit as he looks away. Suddenly he, too, begins to sing, his words slow and melancholic, as the others stop. Later in the film, en route to the airport with his minders, his visit cut short by the North Korean authorities, he opens the car window just enough to sing a few bars of the remembered melody at the wind. It is his song to Tokyo, to his family, to his memories of an earlier life—a song just loud enough not to be heard.