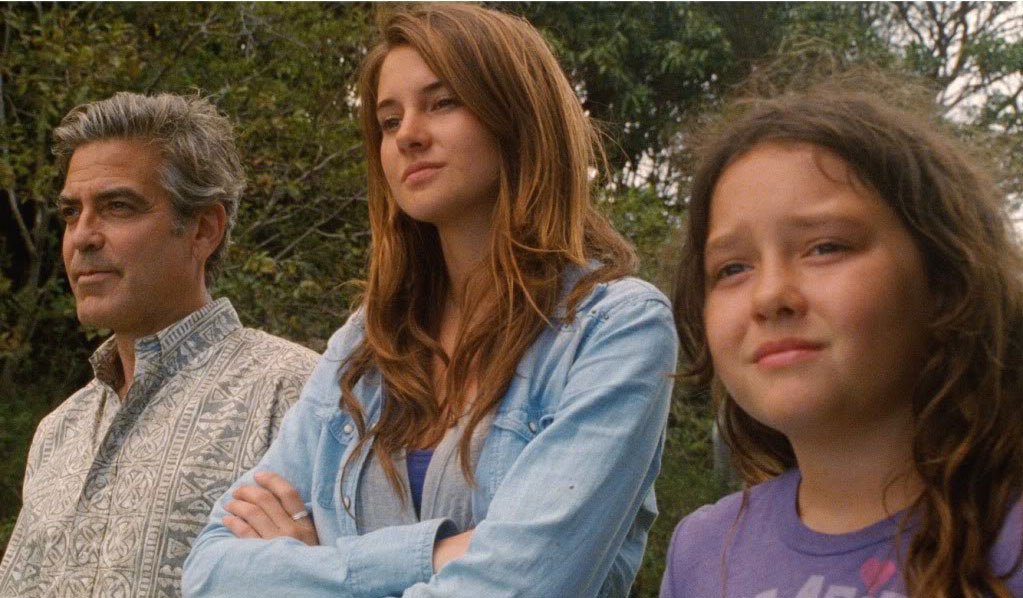 “Do you think we beat our wives and children like animals? I swear on this Quran, we’re humans just like you,” says unemployed cobbler Hodjat (Shahab Hosseini) to a schoolteacher (Merila Zare’i) at one point in A Separation, and it is tempting to think about both this Iranian arthouse thriller and Alexander Payne’s return in terms of fellow feeling across class, age, gender lines. Consider similar sad moments in each film. In Asghar Farhadi’s drama, bank worker Nader (Peyman Maadi) starts to quietly cry while he is spongewashing his Alzheimer’s-afflicted father. In The Descendants Scott (Robert Forster), a bullying patriarch (whose wife has Alzheimer’s too) softly kisses his comatose daughter in her hospital bed. We catch glimpses of proud men’s secret pain; their care for the incapacitated bodies of loved ones vouchsafes a fundamental compassionate humanity. Such scenes of solicitude trigger our own empathy—yet that same tender response is exactly what risks obscuring a sinister institutional dimension overshadowing the personal pathos.

A Separation begins with Simin (Leila Hatami) petitioning for divorce from Nader. He agrees, but with the impossible proviso that he retain custody of eleven-year-old Termeh (Sarina Farhadi, the director’s
own daughter). The characters look to camera as they give their depositions: the initial viewpoint is the presiding judge’s and after the spouses move out of frame the director’s credit appears like a clerk’s endorsement of the record. The marital crisis escalates tragically afterwards when Nader argues with pregnant Razieh (Sareh Bayat), Hodjat’s wife. Employed to tend Nader’s taciturn, incontinent father, Razieh leaves the old man home alone because of an urgent doctor’s appointment. Nader is furious when he realizes, and thrusts Razieh out the door. She falls and later has a miscarriage. Bitter recriminations ensue: Nader vehemently denies that he was aware of Razieh’s condition when he mistreated her; the teacher (who had been in the apartment earlier) corroborates his claim, testimony that will eventually prompt Hodjat’s outburst about being human too. And so the dense, ingeniously regulated plot of A Separation goes on. The director has compared the narration to a crossword puzzle—a good analogy so long as it is understood that the mode is cryptic. Farhadi omits the most important incident of all, and information such as the reason for Razieh’s absence only emerges belatedly (and perhaps unreliably) in conversation. Vignettes such as the sponge-washing, filmed in a plausibly unsteady handheld style, are the pretenses of intimacy that distract from the storytelling’s iron grip.

After the opening formality, several further scenes take place at the law courts, but what is so striking about A Separation is the increasing difficulty of distinguishing between government space and the homes in which forensic battles occur. Characters—excepting only the senile grandfather— take it in turns to become investigator, defendant, witness. Nader improvises a reenactment on the stairs where Razieh tumbled and later chases after the teacher like a bailiff. For her part the teacher questions Razieh’s child and when Hodjat confronts her about the unofficial inquiry he demands a statement sworn on the holy book. Jurisprudence becomes the stuff of ordinary conversation while Termeh doggedly probes her father’s version of events, causing him to assert the contingency of knowledge (“the law doesn’t care about this: either I knew or I didn’t”). In a last twist quasijudicial power is conferred on Termeh.

Prior to that scenario of judgment Simin and Nader arrive at the other couple’s home. It is not entirely clear who decided to hold the meeting, only that informal legal proceedings are now self-replicating unstoppably, so that almost all we can see of Tehran seems to have become a virtual courtroom. Nader also demands a solemn vow, and distraught Razieh cannot stand it: “Why did you come here tonight? Didn’t I tell you not to come? . . . How will I live in this house?”

The comatose woman in The Descendants is Elizabeth (Patricia Hastie), victim of a motorboat accident and wife of Matt (George Clooney), who is a lawyer and sole trustee of a valuable plot of undeveloped Kauai land that is up for sale. After he learns that his spouse will never regain consciousness, Matt takes his two unruly daughters to tell Scott about Elizabeth’s Advance Directive that provides for termination of life support. The comically inflected family melodrama continues as imminent bereavement leads to bonding that accompanies the revelation that Elizabeth was having an affair. Matt island-hops in order to grudgingly do the right thing by explaining the situation to his wife’s lover.

The Descendants. Courtesy of Fox Searchlight.

Early in the film a bubbly friend applies makeup to the senseless woman: “She’s looking a little pale lately, all cooped up here, and I just know she’d be mortified if nobody helped her out with some lipstick and blush.” But subsequent shots of Elizabeth are horrible, her pallid visage zombie-like. This face is atrocious in a film full of beaches and reconciliation. Matt’s wife exists in a legal–medical twilight zone created by the “living will” and the ventilator machine that breathes for her. “The hospital room,” according to philosopher Giorgio Agamben in Homo Sacer, “delimits a space of exception in which a purely bare life, entirely controlled by man and his technology, appears for the first time.” Elizabeth is now “a life that may be killed without the commission of homicide” (translated by Daniel Heller-Roazen, Stanford University Press, 1998, 164–65). What is shocking in The Descendants is not only the presence of this figure of powerless bare life, but also editing that does not allow it to be understood as an exception.

Matt saves the land from development. At the end of an outdoor gathering of interested parties his back is to the camera as the surroundings dissolve around him so he reappears in the same position in the other scene of administered conservation: the hospital room. The verdant, picturesque setting in which legalities are arbitrated is the antechamber of a larger disguised infirmary world. The harrowing montage logic continues with a match cut between Elizabeth and her younger daughter, implying that the adolescent’s existence is somehow bare life too. When The Descendants finishes back at home with a TV-set’s-eye view of surviving parent and children settling comfortably on a sofa, the shot is beleaguered by the preceding nightmarish edits: a terrible institution of coercive care infiltrates this scene of distracted family leisure. We have not left the hospital realm at all.

A Separation and The Descendants suffer a kind of bureaucratic takeover. By contrast another Iranian film, the seventy-five-minute marvel that is Jafar Panahi’s This Is Not a Film, rediscovers storytelling as escapology. The title refers to the fact that, having been convicted of sedition in his home country, Panahi is now under house arrest and banned from directing. He is reduced to appearing as an interviewee (videoed by the talkative Mojtaba Mirtahmasb). Panahi recalls former movies, pausing clips on his big plasma screen (“location is doing the directing,” he says of one excerpt). He ruefully describes his latest script and even blocks out a scene on a beautiful carpet. Attention is drawn to his confined circumstances throughout, most explicitly when he speaks to his attorney on the phone. But are we watching Panahi the documentary subject or a character named Jafar? This Is Not a Film makes room for the fictional, even the mythopoeic, in low-tech cinema vérité. The pet iguana that creeps around the high-rise dwelling, hurting Jafar with its claws, is a prisoner’s dear companion but also a creature from fairytale, a nonchalant domestic dragon. Imperceptibly portals open to another sphere, an incandescent magic world ushered in by the young man who appears at the front door just as Mirtahmasb leaves for the night. The smiling, charming youth is collecting the building’s trash—as a favor, he says, for the friend who usually undertakes this task. Jafar impulsively follows him, smartphone-videoing his illicit expedition.

This Is Not a Film. Courtesy of Palisades Tartan.

The Descendants boasts plentiful gorgeous vistas of the Hawaiian landscape that create a corrupted opposition between undeveloped terrain and the domain of bureaucracy. At the beginning of Payne’s film, however, there are brief shots of urban impoverishment and avenue bustle; they are never-returned-to markers of a zone peripheral to the clampdown. In A Separation too, the city is imperfectly surveilled territory. One of the film’s indications of class inequality is that Simin and Nader travel by car while Razieh relies on public transport (she nearly faints in the heat one time). Farhadi films several automobile journeys, always emphasizing the cramped interior of the vehicle, car-mirror shots accentuating the sense of enclosure. It transpires that the decisive omitted incident occurred in the flux of traffic. If there is an area not fully absorbed in the spreading administrative apparatus that haunts and oppresses The Descendants and A Separation, it is not some wilderness let alone the supposedly private household space that reveals itself to be an institutional outpost. It is rather the remnants of the chaotic modern city. In the exhilarating final moments of This Is Not a Film, Jafar momentarily escapes his internal exile. “Mr. Panahi, please don’t come outside,” says his mysterious guide. “They’ll see you with the camera.” Undeterred, Jafar carries on and in the magnificent concluding image we see that, beyond elaborate gates, the capital’s streets are on fire.