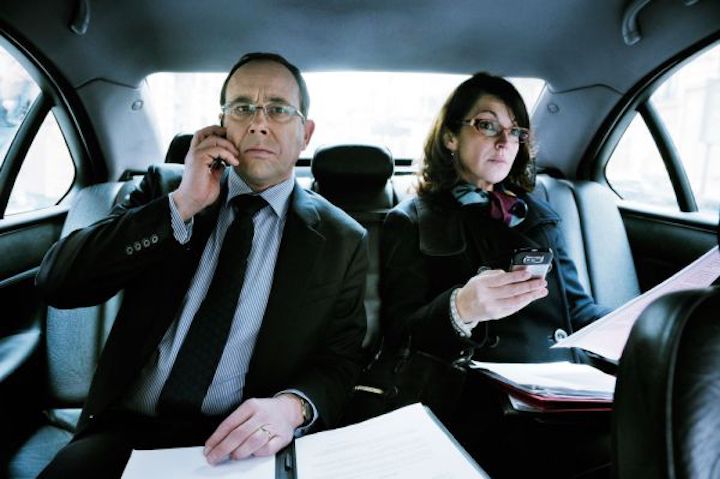 Some movies presented at a below-par 41st edition of New Directors/New Films, a collaboration between the Film Society of Lincoln Center and the Museum of Modern Art, were distinguished more by exuberance than substance. The opening-night selection, Nadine Labaki’s Where Do We Go Now?, for example, took a facile approach to a large, complicated issue: religious tension in Lebanon. Using occasional song-and-dance numbers and plenty of shtick, the film chronicles the attempts of Christian and Muslim Lebanese women to keep their tiny mountain village free of the country’s endemic strife. They fake a miracle, lace the town pastries with hashish, and bus in blonde Russian strippers (a typically whimsical, self-indulgent scene). Labaki cast herself as the beauty in a town where all—including the rowdiest rabble-rouser and the Russians—have hearts of purest gold. Where Do We Go Now? is sentimental and unforgivably cute. Differently cute, and similarly out of its depth, was Kleber Mendonça Filho’s Neighboring Sounds, a rambling tale of middle-class Brazilian unease that repeatedly confuses prurience with daring, and pays mere lip service to Brazil’s unresolved history of racism and violence.

Several of the stronger films in the festival were preoccupied by questions of power. In The Minister, writer–director Pierre Schoeller’s poke around the murky corners of French government, Transport Minister Bertrand St. Jean (excellently played by Olivier Gourmet) rushes to a fatal bus crash, a political negotiation, or a photo op with a constant, undifferentiated urgency. “Defuse, defuse, defuse,” he reminds himself. Enigmatic assistant Gilles (Michel Blanc, who manages to be simultaneously deferential and superior) takes care of the unsavory parts of St. Jean’s job. The third point of the film’s character triangle is Martin Kuypers, a carefully chosen common man hired as the minister’s driver (played by nonprofessional Sylvain Deblé). Nothing about the machinations will be unfamiliar to anyone with access to a news channel, yet Schoeller creates something of Il Divo’s menacing atmosphere, not least in an opening dream sequence featuring a nude young woman playfully crawling toward the open jaws of a crocodile (symbol of the state). Though less bombastic than Paolo Sorrentino’s film, The Minister leaves no doubt about the precariously out-of-touch policy-makers concerned, above all, to bury the fallout from their various compromises until the next administration takes over. The script is first-rate and The Minister effectively conveys a sense of the petty viciousness of politicians subservient to corporate power.

Far less assured, but also concerned with the dissonance between policies extolled and policies actualized, Song Chuan’s Huan Huan is set in a pokey village on the shore of Fuxian Lake. Adolescent, sullen, and almost Chekhovian in her yearning for a factory job in the city, Huanhuan becomes involved with the married local physician. When his infertile wife threatens to expose them, Huanhuan’s family swiftly marry her off to Yue Lin, a young problem gambler, effectively dooming her to never leave. Amid loudspeaker reminders of the one-child policy, Song includes snatches from real Chinese television featuring gaudily dressed men and women lustily crooning about their hardcore sexual gifts. The degraded atmosphere of virtually unmitigated squalor is contrasted with the lakeside serenity the protagonist often seeks out. Though jerkily paced and more difficult than engaging to watch, Huan Huan depicts a tiny community contaminated by corruption and tyranny.

Having ceded his life to the tyranny of heroin, Anders, the protagonist of Joachim Trier’s Oslo, August 31st, is about to leave his countryside rehab. Given a day pass to the Norwegian capital for an editorial job interview, this clever, well-heeled young man proceeds to pay unexpected calls on old friends, attempting to reconcile who he was with the reformed person he seems to be struggling to be. Limiting the action to the single late-summer day, Trier, who co-scripted with Eskil Vogt, captures the peculiar clarity of being momentarily outside your own life. Though the character is arrogant and emotionally unstable, actor Anders Danielsen Lie’s performance makes him sympathetic. Particularly effective is an extended rave sequence in which he goes through the motions of his old life. When one of the young women at his side enthuses about the “unforgettable” evening, inveterate partier Anders tells her she’ll have “a thousand” such nights and never remember any of them, his tone both sad and weary. Inspired by Le Feu Follet, the 1931 Pierre Drieu La Rochelle novel on which Louis Malle based The Fire Within in 1963, Oslo, August 31st deals with the shadow side of urban middle-class life. Though fundamentally a portrait of one man’s self-destruction, the film poses significant questions about the necessary compromises to attain the conventional good life. For Anders, only stupid people are happy. It’s testimony to the strength of Trier’s film that I found myself more in agreement than dissent.

At the other end of the privilege spectrum is Las Acacias’ Rubén, an Argentine lumber-truck driver who agrees to transport illegal immigrant Jacinta and her infant daughter from small-town Paraguay to Buenos Aires. Director Pablo Giorgelli manages to avoid the potential clichés of this scenario through the use of literal smoke and mirrors. Simple devices such as the opening shots of smoke rising from the remote logging site; Rubén’s mastodonic truck reflected in side-view mirror; his cigarette breaks that feel like conversations with himself; and the reflective thermos top that quiets the baby all suggest the remnants of the complicated (and only partially revealed) histories that Jacinta and Rubén bring to the journey. In a manner reminiscent of José Saramago’s present-day-yet-timeless fiction—notably his 2000 novel, The Cave—Giorgelli does not shy away from the abiding mystery of unpredictable human affection. A simple drive becomes slightly mythic, yet even the undoubtedly adorable baby remains unsentimentalized. There’s also something of Aki Kaurismäki in Las Acacias’ economically marginal but emotionally generous characters. Like his Finnish counterpart, Giorgelli understands the improbably subversive power of kindness.

Stanley Kubrick’s first feature Fear and Desire (scripted by Howard Sackler and released in 1953) shared something of that mythic feel. Set along a river in a forest, this story is described in voiceover as “any war” and “outside history,” with soldiers who “have no other country but the mind.” Four downed airmen set about building a raft to make their way past an enemy encampment to their own base further down the river. Discovered by a young woman, they take her prisoner, leaving an erratic private (future director Paul Mazursky) in charge. In a wry Kubrick touch, Kenneth Harp and Stephen Colt play double parts as commander and aide on each side of the conflict. References to Huck Finn and The Tempest occasionally weigh down the script, but Kubrick’s striking images more than compensate. Especially memorable is a hut scene, in which, after killing two enemy soldiers for their food, the rushing airmen jostle the booted feet of the corpses against the door. Kubrick hyper-critically deemed it “unwatchable,” but actually it holds up well, fifty-nine years on: Fear and Desire is a recognizable and significant predecessor to Paths of Glory and Full Metal Jacket—and to Dr. Strangelove as well, particularly in a scene between the enemy general and his captain which foreshadows, in lighting and dialogue, the famous Peter Sellers–Sterling Hayden tête-à-tête. The festival organizers made a good call in expanding “new directors” to include this retrospective view of Kubrick’s initial jab at the perennial, and often lethal, absurdities of combat against which even Russian strippers have no power.

Stanley Kubrick on the set of Fear and Desire. Courtesy of Film Society of Lincoln Center.