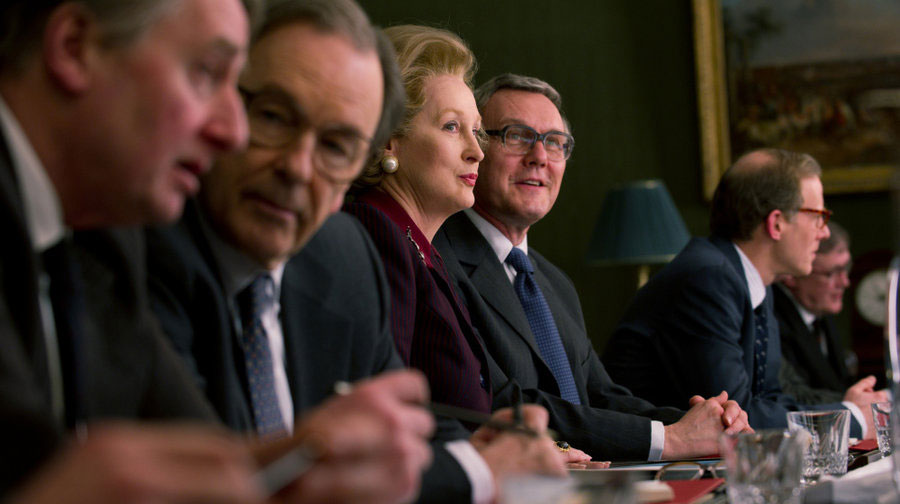 It’s no doubt fitting that The Iron Lady is a strangely unmemorable film. Its point of view is provided by a now demented former prime minister, her memory disintegrating, kept company by phantoms from the past (most notably her late husband Denis) as present events continually trigger recollections of earlier, more momentous times. With its longueurs and its quiet intimacy, the inertial opening section of the film invites us to believe that The Iron Lady might be about the Thatcher who haunts the pages of the late Gordon Burn’s Born Yesterday: The News as a Novel. “Where does she go in between all the times she is not being ‘Margaret Thatcher’?”, asked Burn, who observed the ailing Thatcher while walking his dog in Battersea Park. “The answer, sometimes, it seems, is here, where the short, purposeful steps of her performance self are allowed to dwindle into the short, tentative steps of pensionerdom and widowhood and she is allowed time away from the big emphatic colours she uses to identify herself for the cameras—her blazons” (Faber and Faber, 2008, 17–18).

Yet it’s soon clear that the scenes of the older Thatcher serve as framing for standard biopic material. Thatcher’s improbable rise from Conservative MP to Prime Minister (thirty years on, she remains the only woman to have held the post), and the messy trauma of her deposal, make for an extraordinary trajectory. Thatcher was a contradictory figure who yearned for Victorian values at the same time as she presided over what was in effect a revolution in British society—her defeat of the unions, privatization of nationalized industries and deregulation of financial industries constructed a new Britain. And a new image for the ruling class. On her rise to power, Thatcher had to overcome not only sexism, but class prejudice—as the daughter of a Grantham grocer, she came from outside the aristocratic Etonian set from which the Conservative Party had up until then expected to select its leaders. Her struggles with the Conservative old guard accounted for much of her appeal—Thatcher’s presentation of herself as someone intolerant of vested interests of all kinds allowed her to strike an egalitarian tone that, in turn, enabled the Conservatives to reinvent themselves as a populist party. (It’s perhaps ironic that The Iron Lady was released at a moment when Etonians have once again regained control of the party and the country.) All of this is intensely dramatic material, but Law handles it in a curiously muted, offhand way. What Thatcher’s political policies were, what motivated her to pursue them, what their effects were: don’t go to The Iron Lady if you want to learn about any of this.

Alexandra Lloyd, who plays the young Thatcher, and Meryl Streep, who plays Thatcher in her later years, are seen against the backdrop of historical contexts that are staged only in the most generic way. Some of the most dramatic events in recent British history—the Falklands War, the Miners’ Strike, the Poll Tax riots—are rushed past, barely narrated, still less contextualized or illuminated. This has led to The Iron Lady being accused of depoliticization, but in fact the film’s retreat itself serves the ideological agenda of a leader who famously proclaimed that “there’s no such thing as society.” That remark could serve as an ironic epitaph for the scenes of the solitary old Thatcher, abandoned by all but her security minders and her daughter.

Streep’s performance has been fanfared, not without some justification, since her simulation of the prime minister is pleasingly lacking in ego, to the degree that one often forgets that it is Streep onscreen, without ever believing that we are seeing Thatcher. But the film’s portrayal of Thatcher fails in a fundamental way because we gain no new insights either into what she was like, or what it was like to be her. The problem is not with Streep, but with the whole conception of the film. The biopic form—or at least Law and screenwriter Abi Morgan’s version of it—automatically makes Thatcher, one of the most divisive figures in twentieth-century British politics, into a sympathetic figure. As Morgan herself noted in an interview for www.film4.com, “As a result of working on the film, I can’t help but have incredible respect for her, realising what an incredibly strong leader she was.” At one point, we see the older Thatcher complaining, “People don’t think anymore. They feel. ‘How are you feeling? No, I don’t feel comfortable. I’m sorry, we as a group we’re feeling …’ One of the great problems of our age is that we are governed by people who care more about feelings than they do about thoughts and ideas.” It’s a critique that has some point, not least because The Iron Lady is by no means exempt from its strictures. In fact, it’s as if the film here achieves a moment of self-reflexive critical awareness—even as if Streep’s Thatcher is rejecting the terms in which the film has described her. Yet the shift from thought to feeling is one of the no doubt unintentional effects of the unleashing of consumer libido in the 1980s.

Thatcher herself was by no means a great thinker, but a whole intellectual lineage went into constructing “Thatcherism,” none of which is mentioned in The Iron Lady. Significantly, what we are instead made privy to is the construction of the Thatcher persona, as Thatcher is trained to develop the deeper, supposedly more authoritative voice that became one of her trademarks. The Iron Lady would have us believe that the most significant intellectual influence on Thatcher was her shopkeeper father. The homilies about thrift and hard work which Thatcher learned from her father were comically irrelevant to the immense abstractions of finance capital, yet such folk economics—understanding the financial system as if it was a household budget—served (and continue to serve) a major ideological function. The vicissitudes of capital are obfuscated by an emphasis on personal responsibility. Such personological focus is an inbuilt vice of the biopic, but, at its best, the form can show the historical forces that act upon an individual, through—and against—which they define themselves. But, fittingly given its subject, The Iron Lady leaves us with only the self-made, solitary individual.