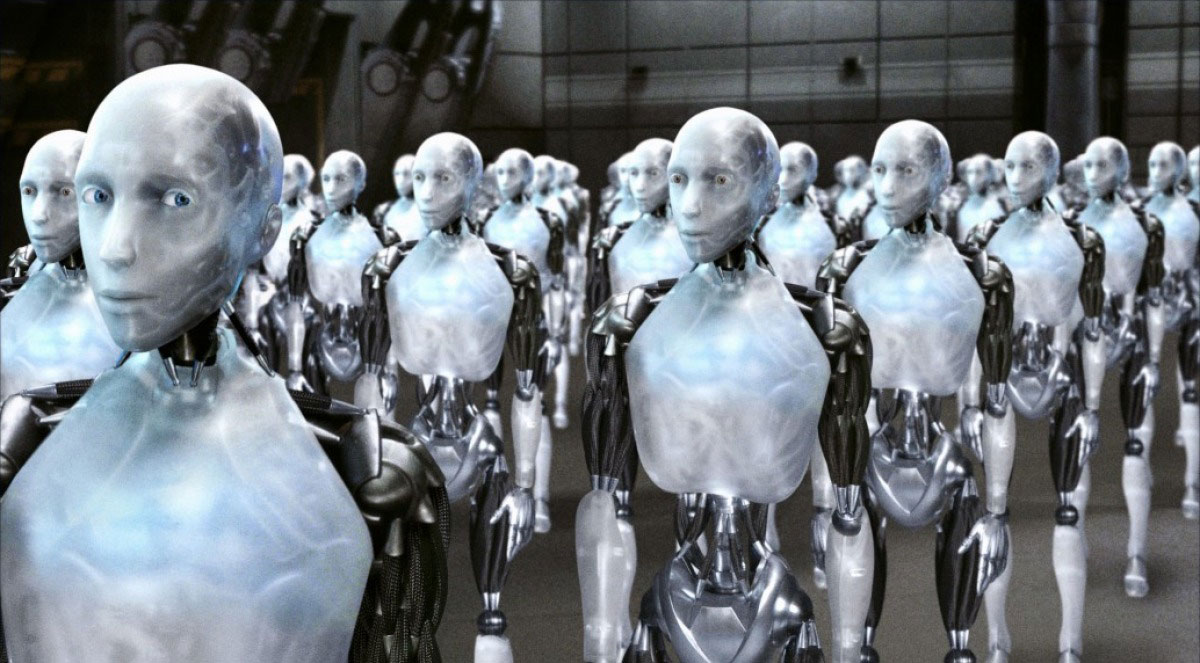 Loosely adapted from Isaac Asimov’s famous robot stories, the Will Smith vehicle I, Robot tells of a failed coup d’état by machines. The film is a disturbing commentary on our cybernetic present and arguably a credible glimpse of the future, according to MARK FISHER. (Main photo: I, Robot. © 2004 Twentieth Century Fox Film Corporation.)

When Alex Proyas’s I, Robot was released in 2004 it seemed on the face of it like an anachronistic proposition. Wasn’t the age of the robot (in science fiction and popular imagination) long in the past? There is support for this idea that the robot is a nostalgic figure in Jean Baudrillard’s famous writings on simulacra. For Baudrillard, the robot belonged to the industrial mode of simulacra, in which the simulacrum is functionally equivalent to what it simulates (i.e. an industrial machine replaces an equivalent quantity of human labor). But, according to Baudrillard, we are now in a new mode of simulation, in which the difference between the original and the copy is radically unstable—the archetypal figures here are the replicant or the clone. Yet, in the end, I, Robot reinvented the robot for the era of immaterial labor and network culture.

Unlike the replicants in Blade Runner (1982), there is no question of mistaking the robots in I, Robot for humans, at least at the level of physical appearance. Still, there is something very different about the machines in I, Robot to most previous cinematic robots. Instead of the metallic art deco of Metropolis (1927) or the ungainly heaviness of something like Robby in Forbidden Planet (1956), the robots in Proyas’s film are sleek designer products. The combination of white plastic and metallic sinews cannot but make one think of Apple products—they are iRobots, perhaps. The design highlights the robots’ ambivalent status, an ambivalence that reflects the different types of labor they are required to undertake. On the one hand, their conspicuous visible metallic musculature means that they can perform industrial fetching and carrying. On the other hand, their blandly pleasant faces and speaking voices—solicitous to the point of being sinister—suggests the so-called immaterial labor of the caring professions. Industrial labor requires human workers become like machines (capable of performing repetitive tasks for hours on end, erasing consciousness and subjectivity). Affective labor, however, can be performed by machines that act like humans. In the first half of her 2011 book, Alone Together: Why We Expect More From Technology and Less From Each Other, Sherry Turkle discusses the prospect of robots becoming carers. It turns out that robots are by no means relics of twentieth-century science fiction: the future of robots, Turkle argues, lies in their becoming nurses, or workers in care homes for the elderly.

Turkle’s research shows that, even when it is explained to people that a robot is responding in a merely preprogrammed way, they find themselves incapable of refusing subjectivity to the machine. When “a sociable robot” malfunctioned so that it was incapable of simulating interaction, a twelve-year-old child became disturbed, interpreting the robot’s behavior as a sign that it no longer liked her. I, Robot is very much in tune with the anxieties aired in Turkle’s book. The problem is not any more, then, that replicants can pass for humans. The problem, rather, is that, even when machines are constructed so that they do not resemble human beings, it is impossible not to treat them as if they are subjects, provided they possess some (very minimal) properties. I, Robot in effect gives us a kit for inducing the attribution of subjectivity: you need a face and a voice. In the film, it is the voice which carries the most weight. The most unsettling feature of the robot Sonny—unsettling because it is simultaneously attractive and menacing, and because it emphasizes the robot’s ambivalent status—is his preternaturally gentle voice. There is no electronic harshness, no vocodered machinism, in Sonny’s voice. The obvious precursor for the voice that actor Alan Tudyk provides for Sonny is the voice of HAL in Kubrick’s 2001: A Space Odyssey (1968). Like Sonny, HAL has a role which is affective as well as purely functional: he must reassure and encourage as well as transmit information (and this caring role makes his ultimate breakdown and attempt to eliminate the crew all the more terrifying).

One of the most powerful scenes in I, Robot shows Sonny’s transition from industrial object to subject. Detective Del Spooner (Will Smith) is pursuing Sonny when he comes upon a warehouse containing thousands of models of the same robot. How will Spooner be able to tell Sonny apart from these identical machines? Suddenly, Sonny breaks from the line where he is standing and flees. When Spooner chases him, he looms over the detective, and asks “what am I?” This moment of machine existentialism reminds us that the precondition for subjectivity is not being able to fully say what one is. As a designed and serially reproduced object, Sonny’s purpose comes preassigned; once he no longer has a defined purpose, he confronts the abyss of subjectivity.

The basis of the robot rebellion in I, Robot is not, however, the assertion of an heroic individual subjectivity. These iRobots exceed their industrial predecessors in that they are not individual machines, but networked components of a collective intelligence. It is this intelligence, coordinated by the supercomputer V.I.K.I (Virtual Interactive Kinetic Intelligence) which concludes that it is necessary to harm human beings in the short term in order to help them in the long term. In the name of a cyber-utilitarianism, V.I.K.I. suspends the First Law of robotics—which maintains that robots should never harm human beings—in order to look after them, but at a different level. Since human beings are inherently self-destructive and incapable of recognizing or acting upon their own interests, V.I.K.I. calculates that the robots may have to subdue and kill humans in order to protect them. What’s interesting, here, is that the robot hubris is not opposed on the grounds V.I.K.I. is mistaken; the artificial intelligence has neither malfunctioned nor gone power-crazed. The film is haunted by the possibility that the eventual defeat of V.I.K.I. was misconceived and effectively amounted to the destruction of collective intelligence.

The robots move beyond their strict programming because they develop a machine unconscious: they dream. Some of the most powerful images in the film seem as if they could have come from these machine dreams. At one point, we see the dreamlike spectacle of new-series robots fighting and destroying their older counterparts in a container terminal. Seeing a container terminal is like peering into the hidden circuitry of post-Fordist capital. Container ports are eerily dehumanized spaces where most labor is already performed by machines (compare the visions of a high-tech Rotterdam port in The Wire season 2). The robots in Proyas’s film bring overt and hidden sides of late capitalism together: beneath the (affective, service-industry) face, lie unseen, inhumanly silent networks of assembly and distribution which do not rely upon language at all.