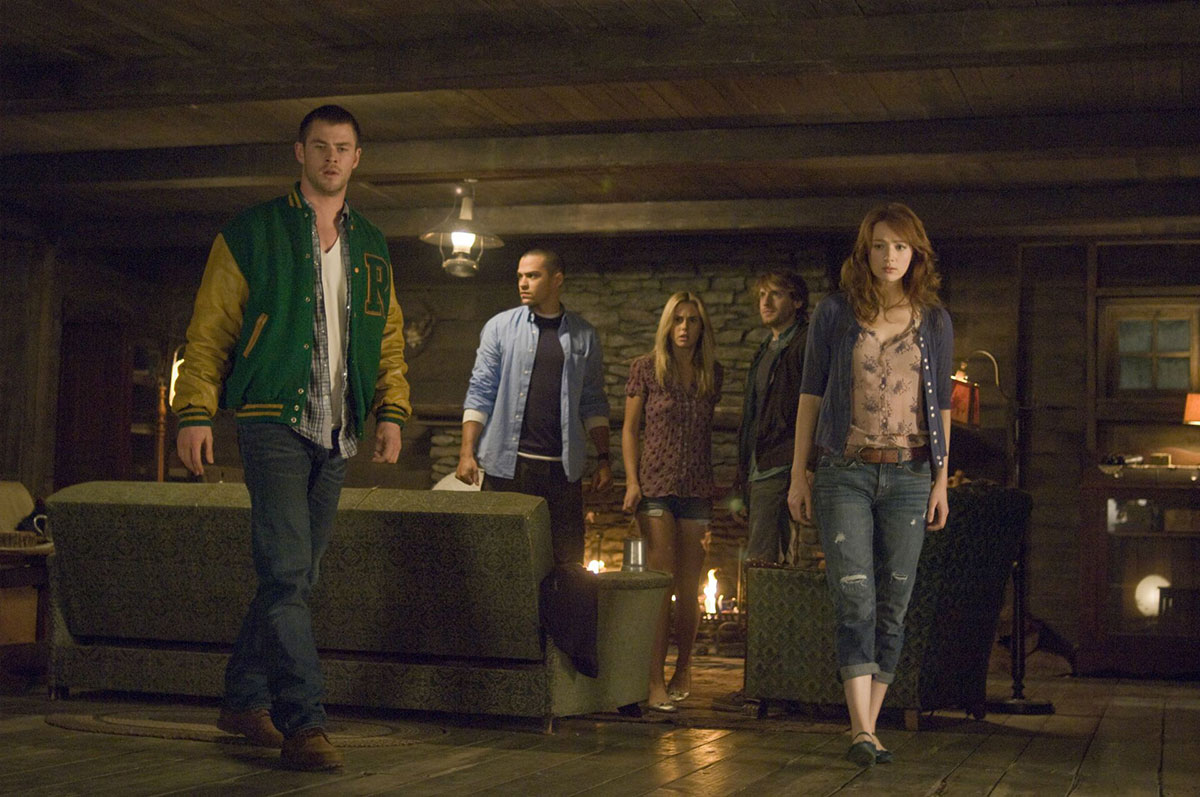 The credits of Cabin in the Woods, the revisionist horror movie co-written and produced by Joss Whedon, begin with bloody Aztec sacrifices. We cut to middle-aged white guys, engaged in a mysterious media project and discussing child-proofing their home. The camera then cranes up into a suburban house where a nice girl is packing for a trip. Soon we meet more collegiate stereotypes: the hot blonde, the dumb jock, the comic stoner (babbling about alternate realities), and the sympathetic black guy. As the kids drive off into the forest, they seem to be also traveling back in time, entering the lost territory of the slasher movie, a genre that would appear, post-Scream, to be exhausted.

But it’s no spoiler to say that the middle-aged operatives (puppeteers, according to the farseeing stoner) are pulling the strings here. Indeed we see them before we are introduced to the young victims, who are so disposable that the actors themselves seem generic. Cabin’s teasing tag line (“You think you know the story … think again”) is thus confirmed from the very start. And the most conventional motifs are placed, as it were, within multiple quotes. When the kids seek directions from a sinister tobacco-chewing man, who says he’s “been here since the war,” they ask sarcastically: “Which war?” But in Cabin’s warping chronotope, time really is out of joint. The handsome forest location—the pines and peaks of British Columbia—is also fake, a simulacrum where eagles will smash into invisible barriers and tunnels be blocked by rock falls that are all too clearly scripted.

The Cabin in the Woods. © Lions Gate Entertainment.

Whedon’s meta-move thus doubles our fun, as we recognize the tropes that are so professionally produced and yet remain baffled by the real enigma: the identity of those child-proofing technocrats. In the cabin there is a two-way mirror, handy for watching girls (and boys) undress unseen. It’s the perfect metaphor for the viewing process of Cabin, at once voyeuristic and self-reflexive, making us meditate on sex and violence even as we safely indulge in the guilty pleasures of movies past. When the good girl fights back, we are glad to be reminded of Jamie Lee Curtis in her prime. And we guess that if a driver says “gotta stay calm,” soon we’ll see a knife to the throat and a van pitched deep into a river. As Whedon himself said in interview, the film has its own “absurd coherence.”

But unlike the technocrats’ hair dye, intended to “reduce the cognition” of the hot blonde, Whedon’s plot twists, apparently cosmetic, serve to heighten our mental processes, make us think again. The controllers bet on the outcome of the mise-en-scène they have themselves constructed and the characters thus have (limited) free will. Just so, the creators of Cabin exploit their self-imposed restrictions to turn the screw one more time on the luckless characters and helpless audience. Thus we learn, early on, that the kids have been actively turned into stereotypes by the controllers: setting the scene, changing the lighting, releasing the pheromones that will provoke the hot sex the audience (inside the movie, outside the movie) knows so well it deserves.

It’s thus (once more) no spoiler to say that, when the slasher movie has come to its early end, tension will migrate to the other side. The tables are turned on the puppeteers and twin alternate realities become one. There are some smart sight gags here (great work, zombie arm!) and imaginative sets (a vending machine of multiple monsters). And in a last historical citation, there is a surprise cameo from the star of another era of horror who tells us what middle-aged guys (in the film, in the theater) always knew: slasher victims are punished just for being young. But whom exactly does this ritual sacrifice serve to placate? The old guys cheering the slaughter on seem to represent not so much the spectators as the mature movie producers condemned to service a witless youth audience. Cabin thus reads as a revenge fantasy from a Hollywood reluctantly in hock to teens. And I wonder how many of those teens are in on the joke. The audience at my late-night screening in a Broadway multiplex responded with riotous laughter throughout. It wasn’t clear how much they appreciated Whedon’s lovingly crafted twists and turns.

The Village Voice reviewer complained that Cabin has “no human, emotional component.” Yet given the film’s respectable box office, it would seem that it isn’t humanity that sells. And the key connection here is television. After all, the dumb kids are cloned from slasher movies, while the smart sarcastic adults are recognizable from quality TV (Bradley Whitford from The West Wing, Richard Jenkins from Six Feet Under). First-time director Drew Goddard, Whedon’s longtime collaborator, also scripted Cloverfield, a monster movie that was cut down to size by the small screen of a camcorder. Cabin, just ninety-five minutes long, was delayed for years by the vagaries of the movie business. With Buffy the Vampire Slayer, Whedon was granted seven seasons to explore his great theme: the close cohabitation of the monstrous and the everyday.

The Cabin in the Woods. © Lions Gate Entertainment.

By coincidence, around the same time Cabin was released network TV launched an alternate-reality series that stood out from the existing Whedon-influenced supernatural titles. NBC’s Awake shares the genre-bending ingenuity of Cabin, in this case twisting the police procedural like a Rubik’s Cube. But it also preserves the emotional component by focusing on the tragedy of mortality. Schooled into indifference over Cabin’s gruesome murders, we are forced in Awake to confront the work of mourning as if for the first time. According to the series’ innovative premise, after a car crash cop Michael Britten (Jason Isaacs) wakes up twice to suffer two losses (his wife, his son), to visit two shrinks (one supportive, one critical), and to work with two sidekicks in two differently colored worlds (Los Angeles, alternately glinting gold or gleaming black). NBC’s website helpfully offers a timeline to keep the two strands separate. Unlike the leering puppeteers of Cabin, in Awake the middle-aged functionary is convincingly, movingly troubled.

Just as Cabin lays bare its reveal in the first five minutes, so Awake gives us a disconcerting heads-up as early as episode two: the accident may have been faked and Britten’s boss is in on his alternate-reality experience. Show-runner Kyle Killen, like Whedon a troubled auteur in film and TV, thus ups the stakes in narrative twists, providing constant complication to keep the easily distracted viewer ensnared. When genre rules are subverted from the very start (with what one might call “self-spoilers”) then the pressure builds for continuing narrative complexity.

Awake thus boasts some studiously enigmatic episode titles (“That’s Not My Penguin,” “Ricky’s Tacos”). And its procedural cases of the week (murders and home invasions) are skillfully woven into the twin serialized story. Hence (like Cabin) it still provides the pleasures of its genre, with Britten as an attractive protagonist (connoisseurs of the mature male figure should skip straight to the skinny-dipping scene in episode 8). Yet the constant switching between two worlds produces enigmas more homely than those posed by police investigation. When his moody son says the laundry no longer smells right, the father notices for the first time the fabric softener used by his deceased wife. Or again, the son’s strange absences are resolved when Britten discovers (in the world where the teenager is now dead) that the latter had been secretly building a motorcycle. Like Cabin, then, and in spite of its complex concept, Awake reveals that the greatest mystery may simply be that of everyday life. And the most keenly felt pain comes not from a zombie arm but from the loss of domestic companionship that has been taken too long for granted.

Paul Julian Smith is Distinguished Professor in the Hispanic and Luso-Brazilian Literatures and Languages Program at the Graduate Center, CUNY.