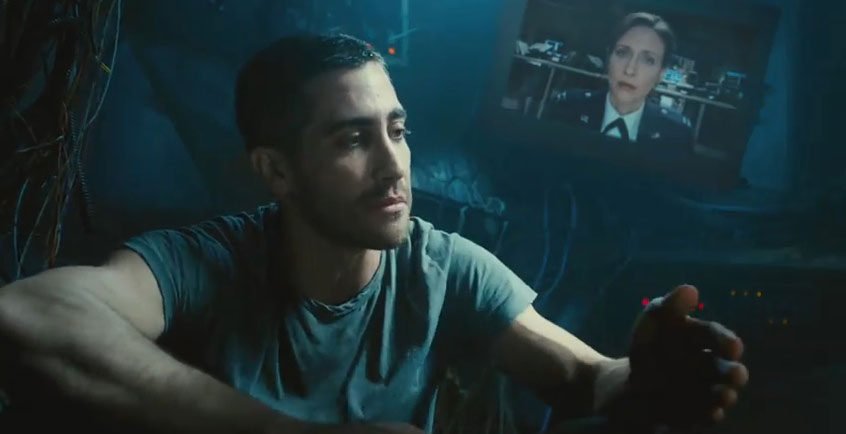 MARK FISHER looks back at a time-traveling thriller with a nightmare vision of the present.

Source Code can be seen as another take on the cinema of precarity that I discuss in the current issue of Film Quarterly. In films such as The Hunger Games, Never Let Me Go, and In Time, the lead characters are deprived of any long term, and forced to live in an embattled, constantly harassed present tense. The novelty of Source Code, however, is that time isn’t just threatening to run out. It has both already run out and it is repeatedly running out. Before its disappointingly redemptive climax, Source Code is a Sisyphean vision of repeated and necessary failure: a technologized nightmare in which Army helicopter pilot Colter Stevens (Jake Gyllenhaal) cannot possibly succeed but is unable to stop himself from acting as if he can.

Stevens is thrown into an experimental simulation technology, which allows those entering the simulation to relive the last eight minutes of someone’s life. A bomb has destroyed a commuter train, and Stevens has been given the identity of a schoolteacher in order to find out who planted the bomb. He can keep re-experiencing those eight minutes, but each time the bomb will go off at the end. Part of the panic-horror in Source Code is that Stevens has to infer all this for himself: like Jason Bourne, Stevens does not know how he has come to be in the simulation, nor, at first, that he is in a simulation at all. Also like Bourne, he enters the film after a catatonic episode—the last thing he remembers is fighting in Afghanistan. Yet Stevens’s situation is much worse than Bourne’s: it turns out that his body has been all but destroyed, and he can only seem to be a physically active individual within the simulation. Stevens is caught between three purgatorial situations—living death within a ruined body; the repeated attempts to solve the crime on the train; and the strange interzone space in which he reports back his findings to his military handlers. He undergoes trauma, post-traumatic stress, the anticipation of trauma, and the repression of trauma all at once. Forced to continually relive the bombing, he is always about to experience the trauma of a catastrophe which he cannot prevent. Yet the very “compulsion to repeat” is itself a symptom of trauma, according to the Freud of Beyond the Pleasure Principle. His existence inside the trauma simulation, meanwhile, is a repression both of the trauma that caused his body to be destroyed and of his memory of this even happening.

In something like an existential version of 24, Stevens escapes these impasses by discovering the identity of the bomber, and ultimately by electing to live inside the simulation—which is now not so much an eight-minute window into the past as a wholly separate world. In this alternate reality, it’s possible for Stevens to intervene to stop the bomb detonating. Such ontological implexes are frequently encountered in the work of Philip K. Dick, but Source Code more closely resembles an action-thriller take on Christopher Priest’s novel, The Extremes, where the characters become lost in the alternate realities generated by a simulator used by the FBI to train its agents.

The mitigated redemption offered by this escape into alternate reality takes much of the sting out of the film’s initial horror. The redemption is only partial because, in the original reality, the bomb has still gone off, and Stevens has saved no one. Nevertheless, the ultimate effect of the proliferation of different realities (and the possibility of meaning between them) here is to devalue what happens in any one of them.

The film’s most important contribution is in its account of the infernal reach of what theorists such as Antonio Negri call “biopower.” In Source Code, biopower’s dominion extends beyond the living to the very limits of death. In the film’s near future, military science exploits the new ethical and technical possibilities opened up by the War on Terror. (The War on Terror belongs to the near past rather than the near future, however: even though the war in Afghanistan continues, it is a term that now sounds like it belongs to a bygone era.) Stevens is both lab rat and military worker, and the film’s vision of labor provides some of its darkest and most powerful moments. The Cartesian bind in which Stevens is held—where his body is a spent husk, useful only for supporting his brain activity—could almost be a Beckettian or science-fictional extrapolation of Negri and others’ theses about “cognitive labor” superseding physical work.

Stevens has no legal status or rights; he is simply a brain forced to perform work that is both repetitive and which induces crippling levels of anxiety. He has no existence outside work, and his work is indistinguishable from both slavery or torture. Such (half)life as he now possesses is entirely in the gift of his “employers,” who are direct exploiters of his cognitive capacities. He doesn’t have to be paid; his body needs only to be kept alive to a sufficient degree to support his brain activity.