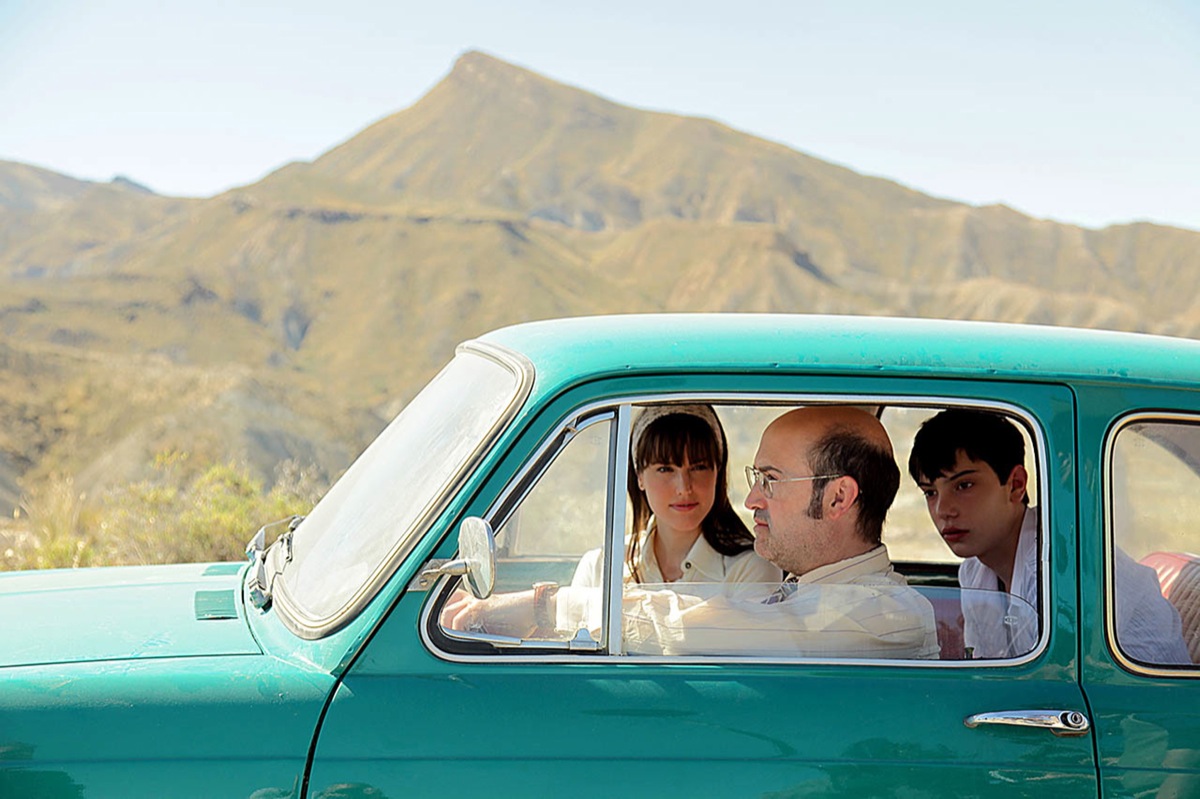 The financial crisis is grinding into its sixth year in Spain, with youth unemployment reaching a record fifty percent. Given these urgent problems, it would be little surprise if Spaniards were to turn away from the investigation of the troubled legacy of the past that preoccupied their politics and cinema until recently. Yet I myself was in Madrid to take part in a new collective research project on cinema of the 1980s. And during a chilly January three theaters were showing period pieces set in different historical moments, revealing different attitudes to those moments, and aspiring to different levels of cultural distinction. Varied in form but surprisingly similar in content, three of my favorites that winter week were a crowd-pleasing comedy, a worthy middlebrow drama, and an experimental art movie.

The comedy La gran familia española [The big Spanish family] (2013; English-language release title Family United) is one of the biggest local hits of the past year. Although the title cites a famous Franco-era Christmas movie (as familiar to Spaniards as Frank Capra’s It’s a Wonderful Life (1946) is to Americans), La gran familia, set in 2010, opens with a sequence from the folksy Hollywood musical Seven Brides for Seven Brothers (Stanley Donen, 1954). A voice-over explains that the film’s five children (four brothers and a young lesbian) were named in alphabetical order as in that film. The premise is that the youngest brother is to marry his pregnant childhood sweetheart in somewhat premature nuptials to be attended by his eldest brother (who returns from abroad to find his girlfriend is now dating a sibling) but not the clan’s mother (who has previously separated from the patriarch). The significant point, however, is that the date of the ill-fated wedding coincides with that of the final match of soccer’s World Cup in which the Spanish team were to prove victorious, a time of national celebration so near and yet so far from the current crisis. It’s no surprise that the teen wedding goes comically awry, but an unexpected twist reveals a lie at the heart of the parents’ marriage long before its breakdown. In the end, public glory will contrast with private pain.

La gran familia‘s reception as a box-office-friendly farce conceals a more important project, which has received the most nominations this year for the Spanish Oscars (the Goyas), including best picture. Director Daniel Sánchez Arévalo is best known for searing dramas, including the aptly named prison-set Azuloscurocasinegro [Darkbluealmostblack] (2006). His unaccustomed comedy boasts a well-crafted and compelling script performed by a troupe of excellent actors. Especially subtle is the black sheep of the family, played by Spain’s It Boy of the moment, Quim Gutiérrez, who coincidentally also starred in a much cruder but equally popular wedding comedy last year, Tres bodas de más [Three weddings too many] (Javier Ruiz Caldera, 2013). The dark shadows around the festive big family thus hint, in a knowingly retrospective perspective, at the fall from grace that would follow national euphoria. But the fact that the film ends with an unexpected reconciliation between family members suggests that Spaniards should now move beyond their bitter differences, and come together for the sake of all.

Vivir es fácil con los ojos cerrados [Living is easy with eyes closed] (2013), a polished historical drama set in 1966 during the Francoist dictatorship, was also nominated for best picture at the 2014 Goyas and, indeed, was later to win the prize, along with the prize for best director, original screenplay, actor (Javier Cámara), and best breakthrough actress (Natalia de Molina). It comes from director David Trueba, brother of the better-known Fernando (this time, his producer) and himself a well-known media commentator in the national press. The sign of quality here is not just the antiquarian art design (period costumes and cars) or the striking landscape photography (shot mainly in the Sahara-like province of Almería), but the presence of respected thespian Javier Cámara, still best known to foreign audiences from his several roles for Pedro Almodóvar. Here he plays a mild-mannered schoolmaster: the film opens with his young charges reciting the lyrics to the Beatles’ “Help” in the strongest of Spanish accents. Vivir is a road movie, with Cámara driving from one rural backwater to another in the hope of meeting his hero John Lennon, who at that time was filming How I Won the War (1967) for Richard Lester. Along the way he picks up a pregnant teenage girl and a runaway boy, both testifying in their different ways to the casual cruelty of Franco’s fascist regime: the girl has been confined by her mother to a convent, the boy is fleeing an authoritarian father.

In spite of this historical poignancy (we witness several scenes of institutional violence), the film is something of a fairy tale. The earnest, chubby teacher will, finally, get to meet his idol, just as the latter is composing the melancholic and enigmatic song that lends one of its lines to the title of the film: “Strawberry Fields.”

As its title again suggests, Vivir plays on the dynamic of blindness and insight, with respect to both its characters and audience. Led by the teacher, the teenagers glimpse a future of personal and sexual freedom personified by Lennon, but impossible in 1960s Spain, a future for which they will have to face a lengthy struggle (Spain would only get its Sixties in the Eighties). Coached by the director, the modern spectator is surely shocked by memories of underdevelopment (Almería seems to lack running water, let alone electricity), yet chastened by the promise of a youthful idealism that is long gone. Sometimes open eyes hold little consolation when the future (in the past inhabited by the characters and the present lived by the audience) appears so bleak.

The third film I saw was a bracingly avant-garde mid-length work titled precisely El futuro [The future] (2013, previously shown at the Locarno Film Festival), which played briefly to packed houses at the newish Cineteca, a screen generally devoted to documentary. The venue was appropriate, as the film masquerades as found footage shot at a party held in 1982. This is the date of the Socialist Workers Party’s general-election victory, which is generally thought to have ended the transition from dictatorship to democracy. Indeed, the film begins with audio over a black screen of the new President calling on all Spaniards to embrace a national project of modernization and solidarity. With constant jump cuts and varying degrees of focus, we watch as twenty twenty-somethings chat, flirt, smoke, snort, dance, and drink (mainly drink). Nothing dramatic transpires, although one woman shares her breast milk with fellow revelers.

The great novelty of El futuro is that almost all of its dialogue is inaudible, eclipsed by the nonstop blasting of Spanish post-punk hits of the period. Indeed the one lengthy discussion we do hear is from an old-style Marxist praising the Basque terrorist group ETA as the “armed wing of our proletarian struggle,” a position laughingly at odds with the heedless hedonism of the partygoers the speaker dismisses as “animals.”

El futuro thus sets up, more so than the previous examples, an unsettling and disturbing double vision. Its unerring art design re-creates with uncanny accuracy a grimier, scruffier Spain (with some actors who are notably unattractive) than today’s, suggesting an immediate access to a relatively forgotten past. Yet the audience is aware that these party animals will, thirty years later, have been responsible for the reckless boom and bust that betrayed all the utopian talk of modernization and solidarity with which the current democratic era began. And of course in the film the 1980s youths are portrayed by their contemporary counterparts, tricked up in leather bomber jackets and asymmetrical haircuts, the very generation that has been left on the trash heap of mass unemployment. Indeed it was striking at the screening I attended that almost all of the audience would not yet have been born in 1982. The film, apparently similar to the auteurist “slow cinema” of festival favorites Jaime Rosales or Albert Serrat (winner at Locarno this year), has quite a different effect from those arty provocateurs. It relies rather on the complicity of its intended audience to fill in the gaps in its minimalist aesthetic, infusing everyday banality retrospectively with historical significance and intense emotion.

El futuro is directed by Luis López Carrasco, hitherto known as part of the collective Los Hijos (“The Sons” or “Children”). And it is dedicated (with bitter irony or wry affection): “To my parents.” The film’s closing shots show the blankly unaesthetic façades of the apartment buildings in which most Spaniards now live and which figured heavily in the property boom that played a major role in the destruction of their economy. López Carrasco also reproduces on screen the heedlessly nihilistic lyrics of one song featured in the film, whose celebration of a post-nuclear landscape is mirrored by the urban desolation seen in much of modern Spain.

What the current crop of fiction features shows, however, is that the roots of the present crisis are clearly in the past. But these varied films also reveal that Spanish directors are now engaging strongly and deeply with the paradoxes of a post-Franco period that has now lasted thirty-nine years: exactly as long as the dictatorship that preceded it.