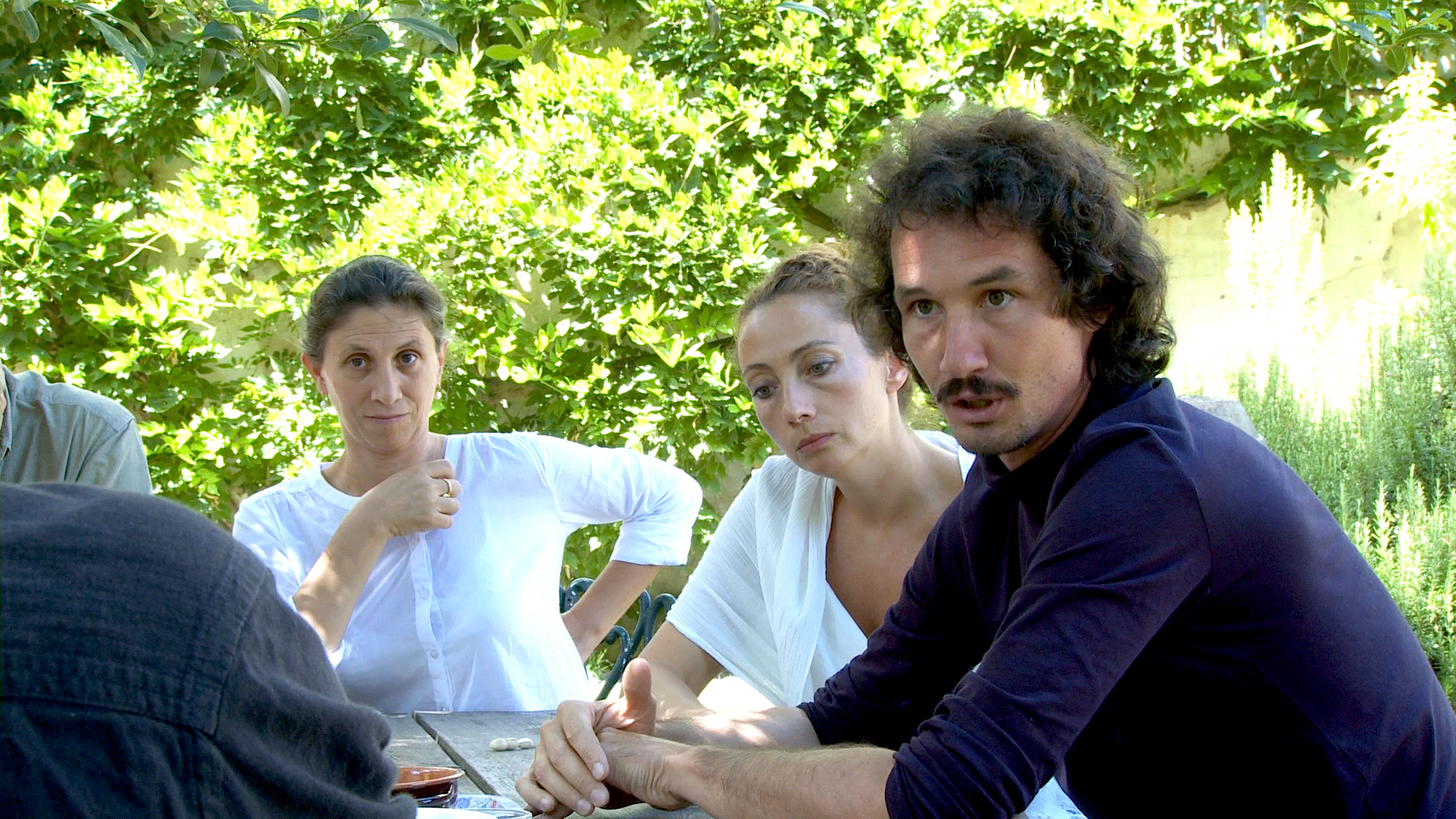 The so-called “crisis” in Europe and North America is a euphemism, peddled by those who have lost nothing in the past few years, to soften the unacceptable shock of the new social-economic order. Among other victims, the culture of the artisanal gesture—authentic, free, and as old as our civilization—has been damaged as never before. Miraculously, in the world of wine, there is a group uniting rich and poor, Left and Right (though mostly Left and middle class) that has resisted with astonishing success. For years, I’ve wondered if my filmmaking colleagues would follow their lead.

In ten years, these renegades have transformed the basic idea of wine, especially in France and Italy, while exposing the cynicism and chemical manipulation of most conventional wine. So radical and so successful have the natural winemakers become that they provoked the fabled reactionary American wine critic Robert Parker to define them as a “scandalous fraud that needs to be eradicated,” a laughable idea given that Parker recently sold his brand—that is, his lifetime’s name and reputation—for tens of millions of dollars to Singaporean financial speculators.

Meanwhile, thousands of farmers and recent converts to farming (many of them fleeing dying businesses such as film, journalism, photography, and the arts) have declared their freedom to make wine with a profound respect for the history of a place as well as a profound self-respect. These natural winemakers have scorned the cynical bureaucratic compromise of certified “organic” wine to renew a libation that has provided joy and comfort for eight thousand years. Turning their backs on the rules of the marketplace, they are united in their absolute respect for the health of their soils, for the people, animals, and insects who bring their vines to life, and for the humans who will eventually drink the fruit of their labor. It is no surprise that in Europe and in North America, natural wine bars and restaurants are exploding, frequented especially by young people much more lucid about the meaning of commercial fraud than my generation has been.

So I feel deeply relieved and excited to see that a growing number of my fellow filmmakers, consciously and unconsciously, are starting to follow the winemakers’ resistance to a cynical, corrupt, and wholly outdated system of production, distribution, and marketing with their own refusal of cinema’s systems of regulation and self-censorship. In the United States, Ira Sachs, a former Sundance winner, has for the second time been able to complete a film with resources from Internet crowd-funding sites, including Kickstarter. Following up on his sublime Keep the Lights On (2012), Sachs showed Love Is Strange (2014), an open-hearted meditation on an older gay couple played by John Lithgow and Alfred Molina, at the Sundance and Berlin film festivals to very different but equally enthusiastic audiences. His film is taboo-busting not just for his mode of financing but because Sachs delights in using the surface language of conventional American film drama in order to stealthily deploy largely untold scenes of gay life.

The Brazilian Karim Aïnouz was also in Berlin with his beautifully sensitive Praia do Futuro (2014); a film that invokes a sensibility more associated with 1970s anticonformity, it is an otherwise very contemporary story of loss and desire among gay and straight from Brazil’s hardscrabble northeast region who are on the road to Germany. In absolute counterpoint to Sachs, Aïnouz—through the creation of a dreamily anxious and highly aestheticized, even fetishized cinematic language—serves to emphasize not the proximity of gay life to straight, but its apparently insuperable distance. And for our greater delight, both versions are convincing!

Alexandre Rockwell, another former Sundance winner for his cult hit In the Soup (1992) and an indie mainstay for two decades, has come up against the impasse that US independent production and distribution now poses for virtually everyone. But unwilling to give in to the tyranny of a poisonous shadow marketplace, he went off last year to film virtually by himself with his two small children. Unapologetically noncommercial in length at 60 minutes, Little Feet (2013) is a beautifully grainy but very contemporary black-and-white meditation on the tenderness of childhood’s disaffections. While Rockwell too has resorted to Kickstarter to allow the film some commercial life, there is something deeply salutary about a filmic gesture that celebrates an artist’s primacy in the face of general indifference.

In France, former Cannes Palme d’Or winner (2008) Laurent Cantet, turning his back on the French industry and its often chauvinistic limitations, recently returned from a three-week shoot in Cuba. He spent the entire time on a rooftop at night with local actors and technicians, shooting a reflection on the tortured fate of the Cuban revolution and its meaning for those who have abandoned all hope for meaningful change.

But it was Santiago Amigorena, distinguished Franco-Argentinian novelist-filmmaker, who perhaps has had the most radical proposition. Whenever opportunity presented itself over the course of a year and a half, Amigorena united four young actors and two young technicians in Paris to shoot in a state of permanent experimentation. His film Les Enfants Rouges (2014), he explains, was “made, from start to finish, without any money exchanging hands.” Much of the French press has hailed it as a groundbreaking reminder of the “rupturing power of the nouvelle vague.” But Amigorena insisted that it be shown in a single movie theater, a celebration of the unique, artisanal gesture in an industry drunk on dreams of maximum reproduction and maximizing wealth.

As for me, I had made my last fiction film, Rio Sex Comedy (2010), as a cooperative with Charlotte Rampling, Bill Pullman, Iréne Jacob, Fisher Stevens, and other actors, in which all of us and the (few) technicians were paid an identical salary and were all co-producers, mutually responsible for all aspects of the production. But the strain of making a dissenting film (in content and structure) while accepting industry financing (from, in my case, the French film industry) proved uncomfortable.

Inspired by Amigorena, Sachs, and others I’ve also recently made a film outside of any market constraints: Natural Resistance (2014), shown alongside the work of my friends and colleagues at this year’s Berlin film festival. My 85-minute film explores the courage of four of Italy’s natural winemakers—Elena Pantaleoni, Stefano Bellotti, Giovanna Tiezzi, and Corrado Dottori—as well as its most maverick film custodian, Gian Luca Farinelli, all of whom demonstrate how ethical rebellion against a failed system is something not only necessary but feasible.

But perhaps even more critical than the spur provided by my colleagues to create films outside of market constraints, I realize now that I was following the lead of these natural winemakers whom I had known for many years. In their search for that magic point of tension between the infinite, spontaneous variety of nature and the purposeful craft of man, they have created wines that are most of all a surprise to themselves. Natural Resistance could be described as an accidental film (and doubtless its detractors will froth at the mouth at this notion, just as establishment critics like Robert Parker do with natural wine). After two years of frustration with the French film establishment—who have always been the principal funders of my films—I began to wonder what place I might still have to create un-self-censored and handcrafted work.

Late in the summer of 2013, I happened to have the camera with me on a family trip and began shooting out of instinct. I had no intention of making a film, but the urgency and delight of an exchange between a small gathering of natural winemakers and Gian Luca Farinelli, director of Italy’s most important cinemathéque, the Cineteca di Bologna, created a desire to transmit the privilege of what I was witnessing. If for no one else, then at least for my three children. But after following these winemakers—farmers who in fact grow more than just grapes (another sign of the urgency of the times)—and then shooting with Farinelli as he toured the country trying to promote a return to movie theaters to see old films that the Cineteca had restored (a virtually extinct notion in Italy), I sensed that there were even more compelling reasons to continue. But only in the editing process, when I started to marry the footage with clips from older films of rebellion—snippets of Chaplin, Rossellini, Pasolini, Soldati, Bresson, Oshima, Monicelli, and others—did I understand that I was making a film about a deeper ecology. Because environmental ecology and sustainability have no purpose unless there is also a cultural ecology. And cinema and culture today are surely as much under threat as the planet’s health.

So the terrible truth is that none of these artisanal responses to the new economic brutality (neither mine nor the other filmmakers’) has anything to do with money. The problems facing filmmakers and other artisans go much deeper. In the collapsing social compact, money is a less critical factor than culture. And it’s clear that culture, in North and South America as in Europe, is the first victim of the new world order. The question facing filmmakers of all beliefs and levels of accomplishment is how it will be possible to create a radically new system of production, distribution, and exhibition that will adapt to the emerging “Dark Ages.” But adapt in a way that will allow these new artisans to make a modest but dignified living, and also provide a historical continuity with the cinema of the first—but let’s hope not last—hundred years.