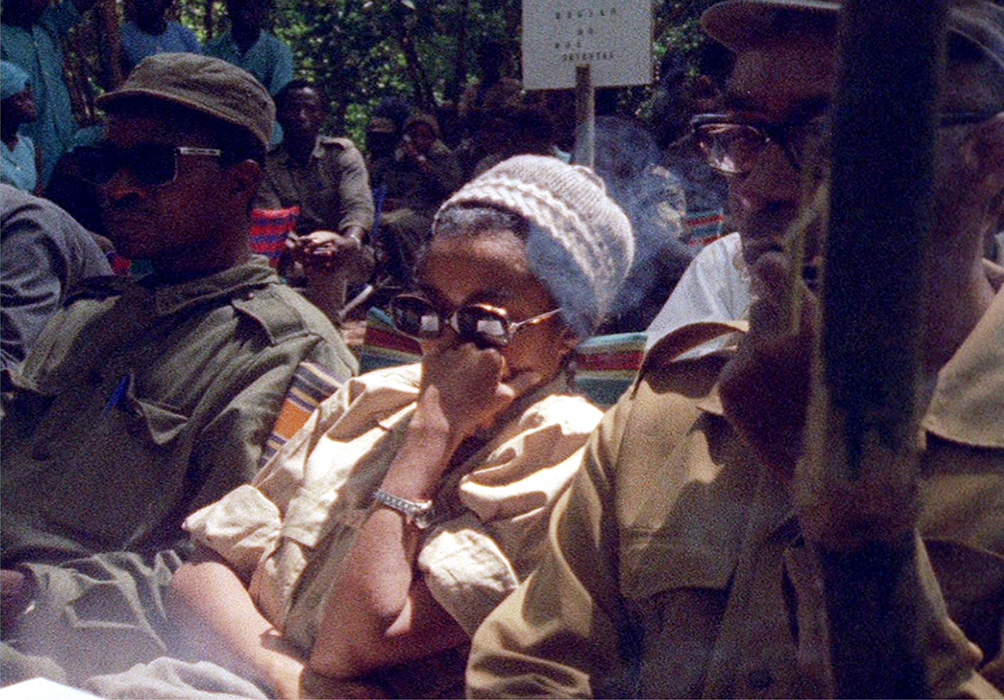 Frantz Fanon was born on the Caribbean island of Martinique in 1925, and grew up a gentleman of the French Empire. He realized, when he came from the island of Martinique to the mainland of France in Europe, through involvement in the French army elsewhere, that his class privilege among his own black people did not mean anything in the country of the colonizing masters—he was nothing but a black man. In a famous chapter in his book Black Skin, White Masks (rejected as a dissertation by a French university), he mentions his shock when a white French child cries out to her mother—”Mama, see the Negro!” But Fanon moves from just this shock into an attempt to understand colonization all over the world. In this very book, in the last chapter, he walks us through a reading of the European philosopher Hegel’s famous chapter on “Master and Slave,” and turns it to his own use. As we watch the film Concerning Violence, we remember this in the freedom fighters’ invocation of the named states of Mozambique and Angola, borders established by the imperialists. Fanon’s lesson was that you use what the masters have developed and turn it around in the interests of those who have been enslaved or colonized. In this he is with great leaders like W.E.B. Du Bois and Nelson Mandela. Fanon did not stop at thinking colonization, but wanted to do something about it. He gave his time and skill to the healing of those who suffered from violence.

He went to an African country that spoke French—as the resisters in this film speak Portuguese—creolizing the master’s language as their very own. Such thinking is shared by great writers such as Assia Djebar of Algeria, Njabulo Ndebele of South Africa, and Syed Abdul Malik of India. Receiving no response from Senegal, he went finally out of sub-Saharan Africa into Algeria in North Africa, where he, as a trained psychiatrist, worked in the Blida-Joinville Psychiatric Hospital, and developing a radical theory of colonial psychopathology, helped those who fought against French colonialism with the FLN, the National Liberation Front of Algeria, joining the party himself in 1954. My friend Assia Djebar, whom I have already mentioned, worked with him in Tunisia, and has shared with me in detail the actual experience of his work—to heal the effects of violence, rather than to condone violence as such.

Fanon died at 36, and we would have gained greatly if this man of fire and resolution had lived long enough to give us his wisdom when the colonized nations regularly fell into internal violence and internal class struggle and internal greed after so-called liberation. The issue of colonization is a greed shared by humankind. No one is better than anyone, every generation must be trained in the practice of freedom, caring for others, as did Fanon, and that is what colonization stops. Within the greed for capital formation, colonization allows already existing ignorant racism to spread the markets in the name of civilization or modernization or globalization, as it does today. This film captures the tragedy of the moment when the very poor are convinced in the name of a nation, that is going to reject it once it is established on its own two feet, to offer themselves up for a violent killing. The French philosopher Jean-Paul Sartre, himself a strong anti-colonialist among the colonizers, read the book Fanon wrote in the last 10 weeks of his life, knowing that he was marked for death by acute leukemia, even as he was being hounded by the colonizing government of France, as an endorsement of violence itself—not reading between the lines, where Fanon insists that the tragedy is that the very poor is reduced to violence, because there is no other response possible to an absolute absence of response and an absolute exercise of legitimized violence from the colonizers. Their lives count as nothing against the death of the colonizers: unacknowledged Hiroshimas over against sentimentalized 9/11’s. Here the lesson of Gandhi regarding the power of passive resistance and the contrastive lesson of Israel in the exercise of state legitimized violence drawing forth violence in extremism is useful today. It is in this context that we remember that after the struggle against Portugal, the new nations of Angola and Mozambique fell into civil war, and disproved the dream of the very poor that decolonization would bring a new day. Mozambique has joined forces with capitalist globalization. This is the rule rather than the exception. Fanon’s own warning is contained in A Dying Colonialism. Against the grain of his optimism of the will, he writes: “it is no longer the age of little vanguards,” an unintended description of the guerilla warfare we will watch on the screen. Working within the problems created by a postcolonial nation which brings back the pre-colonial problems that the great historian Fernand Braudel called longue durée or long term: “structures which lie invisible below the surface of social activities,” many of us think that the real disaster in colonialism lies in destroying the minds of the colonized and forcing them to accept mere violence—allowing no practice of freedom, so that these minds cannot build when apparent decolonization has been achieved. From the example of mature leaders such as Du Bois and Mandela, we know or can at least have the feeling that Fanon would have gone in that direction. Unlike Gandhi, the early Du Bois, or yet Mandela, who worked for their own nation-states—Fanon was not himself an Algerian, not a member of the country which he helped. This is an important lesson for those of us who want to think the world rather than, thinking from within a nation-state, argue from identity, learning the lesson that mere national liberation without the practice of freedom cannot in fact bring a socially just world for the very poor. Fanon did not know the language of the common people of Algeria—Arabic; he was not himself a Muslim, the majority religion of Algeria. He could not know the power of religion as a discourse of political mobilization in today’s world, particularly after so-called independence in what is today called “the Islamic world.” I was working the election booths in Wahran (Algeria) in 1991. It is within the context of the aftermath of colonialism—that Fanon could not know—that the tragedy of what we watch in this film must be carefully considered. This is a teaching text.

I add a word on gender. This film reminds us that, although liberation struggles force women into an apparent equality—starting with the 19th century or even earlier—when the dust settles, the so-called post-colonial nation goes back to the invisible longterm structures of gendering. The most moving shot of this film is the black Venus, reminding us of the Venus of Milo with her arm gone, who is also a black Madonna, suckling a child with bare breasts. This icon must remind us all that the endorsement of rape continues not only in war but also, irrespective of whether a nation is developing or developed—in women fighting in legitimized armies. Colonizer and colonized are united in the violence of gendering, which often celebrates motherhood with genuine pathos. Here we have to promote our brother Fanon into a changed mindset, but he, who would have been in his 80s today, is not there for us. What I can recommend is that you also watch a video made by Algerian women active in the revolution called Barberousse mes soeurs (Hassan Bouabdallah, 1985) if you can get your hands on it.

Here now is our film, a tribute to and an illustration of Frantz Fanon’s Wretched of the Earth. I end it in Fanon’s own way, turning around for our own use what a European philosopher wrote for the use of Europe over 200 years ago: turning Kant around for our purposes as he did Hegel: “anything which the people (i.e. the entire mass of subjects) cannot decide for themselves and their fellows cannot be decided for the people by the sovereign either.” The people under colonization have had no practice of freedom. You cannot decide without practice. The ones you see on the screen are a small part of the people, the poorest of the poor, mobilized into violence by sovereign leaders: cannon fodder. This practice goes on in all armies, all resistance movements, in the name of nation and religion. Here Fanon would have been useful today. As for gendering, we must ourselves gender “the people.” Our brothers Kant and Fanon are not useful here. I thank Göran Olsson for setting us these tasks.