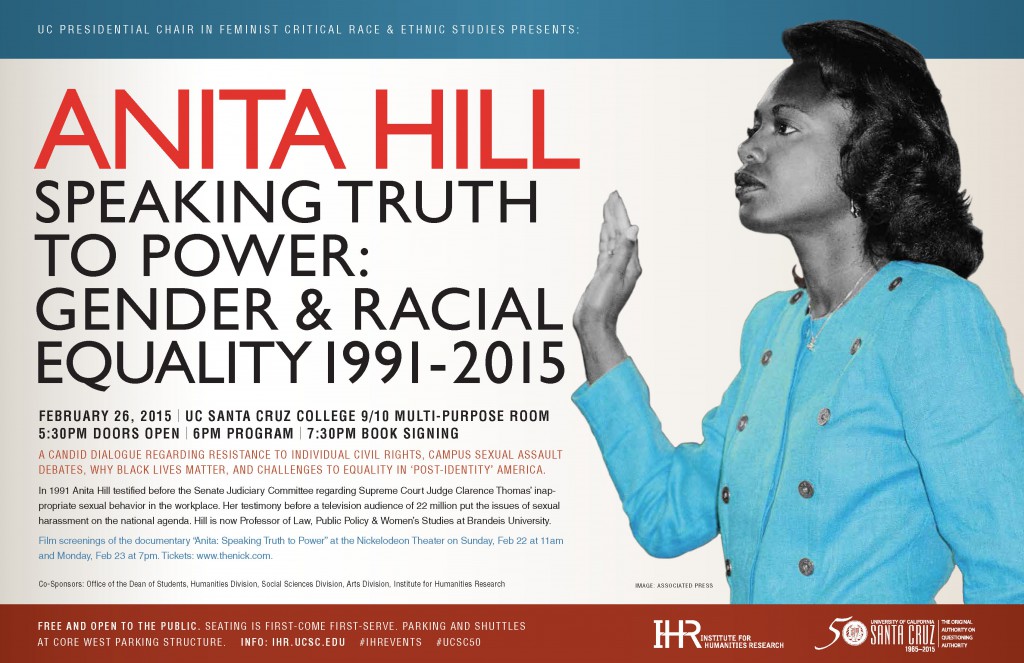 In February 2015, Anita Hill came to the University of California, Santa Cruz, to deliver a lecture, “Speaking Truth to Power: Gender and Racial Equality, 1991-2015.” She also presented a seminar, “‘An Intersectional Problem’: Gender, Race, Class, Political Standing and the Sexual Assault of Black Women.” At that seminar, pondering a question about the role of film in depicting histories of sexual violence, Prof. Hill responded:

Film can be as impactful as the law in shaping what people understand and how they give meaning to the law. I think it’s important for us to pay attention to film. It gives us a way to comment… . Film can give something a longer-term effect… and a way to say, this is what’s wrong with the system. And to stop perpetuating narratives that are not historical, not reflective of actual experience.

Hill’s words are an important reminder of the indexical quality of films. Frieda Lee Mock’s portrait of Hill, Anita: Speaking Truth to Power (2014), shown in conjunction with her visit, performed that function with the incorporation of historical footage of the Senate confirmation hearings for the Clarence Thomas Supreme Court appointment. It’s not a perfect film, too padded with scenes of celebration and congratulation, but its archival research is superb. I still have a shelf full of dusty VHS tapes that I recorded off CBS in 1991: televised hours of Hill’s testimony on the hill.

What I never saw, though, was the remarkable dignity of Hill’s aged parents, who had flown in to support her. She was the youngest of thirteen children from a rural Oklahoma family. The scene of her entering the chamber with her elderly parents so encapsulated the wrongness of what was done in that hearing, the violence of its denial of her testimony. What I had forgotten, though, was the identity of the committee chairman: Senator Joseph Biden. His cowardice and capitulation that day changed the course of American history. The full cost of that confirmation (with a vote of 52 to 48) can now be viewed from the majestic distance of nearly 25 years: it led directly to the decision on George W. Bush’s election, to the more recent decision to roll back the Voting Rights Act, and so many other Supreme Court outrages.

I wish Professor Anita Hill (now at Brandeis University) could have delivered her seminar testimony in a different setting—on the “Listening Tour” that PBS staged in cities across the U.S. in the late winter and early spring of this year. Prompted by outrage over its flagship station WNET’s plan to shunt the network’s two leading public-television documentary programs, POV and Independent Lens, onto an ancillary channel, these sessions gathered stories from audiences, independent filmmakers, and concerned parties.

“I am here to save public television from itself.” That is an excerpt from this editor’s testimony at the inaugural session in San Francisco. It’s hard to believe that the PBS response to documentary’s greatest surge of popularity in history is to dump it. With the collapse of so much traditional journalism, documentary has become ever more important as a guarantor of the public interest. At the same time, documentary has become more interesting, more inventive, more original, more compelling. Yet public television wants to cast it out of its less-than-prime-time schedule slot, after already shuffling it around there to lower its ratings. The listening tour felt more like a kangaroo court, or a show trial held before the guillotine blade drops.

Documentary is part of public television’s birthright. PBS can claim a terrific influence on the medium, from the earliest days of direct cinema. These programming threads are the placeholders for quality independent production on what’s left of broadcast television. Ironically HBO and Showtime and Netflix are all competing for the best documentaries. Why doesn’t PBS care? I suspect it actually does care, that it very much cares. In 2013, there was a tremendous uproar over two documentaries: Park Avenue: Money, Power and the American Dream by Alex Gibney (see the Sundance report in this issue for an update on his latest production) and Citizen Koch by Carl Deal and Tia Lessin.1 The first was broadcast on public television, the second was not. The first was funded by ITVS, the Independent Television Service, which is co-hosting the listening tour; the second was not. The public uproar was over the PBS and ITVS refusal to support Citizen Koch but I suspect that the private uproar was over their support of Park Avenue, which aired on Independent Lens, one of the shows now in danger of being dropped. Is this reshuffling, then, a massive form of payback? PBS is not noted for transparency, so it may be difficult to determine that answer.

One thing is certain. Albert Maysles, legendary filmmaker and co-inventor of the modern documentary, died at home in New York City in March at the age of 88.2 If he were still alive, he could have given PBS a piece of his mind. Maysles spent years sticking up for the underdog and challenging societal norms in the service of the individual, of justice, of the right to be whoever you are: a Bible salesman, a Rolling Stones fan, a pair of Hampton socialites down on their luck. His legacy is secure.

Karen Beckman has gone deep into the archives to unearth a remarkable history in her “Black Media Matters: Remembering The Bombing of Osage Avenue (1987).” Just in time for the thirtieth anniversary of the City of Philadelphia’s bombing of its own citizens at the MOVE headquarters that Louis Massiah’s landmark documentary (made in collaboration with Toni Cade Bambara, author and activist) investigated, Beckman parses its significance and reexamines its ambitions through a careful study of period documents. Drawing on the resources of the Scribe Media Center which Massiah founded and the Toni Cade Bambara archive at Spellman College, Beckman situates their work together in the context of a local, regional, and diasporic cultural praxis that bound together Black life in the United States in the post-Vietnam era.

In her “China Unraveled: Violence, Sin, and Art in Jia Zhangke’s Touch of Sin,” Jiwei Xiao unpacks the richness of Jia’s metatextual tour de force, analyzing its characters as signifiers for the chaotic complexities of Chinese life in the 21st century. Noting the references to Jia’s own work as well as to other key cultural figures and films, she concludes that Touch of Sin is a significant departure from Jia’s earlier work and augurs a new direction for his filmmaking, one that can span references from Chinese opera to Foxconn factories and embrace violence as an allegorical tonic for material social ills.

Aviva Briefel tracks allegory into a wildly different setting in her “Mickey Horror: Escape from Tomorrow and the Gothic Attack on Disney.” Her close reading of Randy Moore’s location-shot horror movie reveals the dread of the female at the heart of its nightmare, as the film detects the monstrous female hidden in the workings of the theme park. Revisiting Frankfurt-school notions of mass culture, Briefel sees filmmaker Randy Moore’s guerilla actions against Disney as a form of saber-rattling, but worries about the corporation’s ability to coopt any and all resistance. Readers can visit the official website of Escape from Tomorrow to check the number of weeks that have now elapsed since the film’s release without Disney taking action (since the date in the text is, alas, already necessarily out of date).

Paris-based William Caroline visited the “Duras Song” exhibition before it closed to assess Marguerite Duras’s life and career on the centenary of her birth. The revelations of her early politics and end-of-life love affair are instructive bookends for a figure better known for her early love life and later politics. He situates her filmmaking in its crucial position within her politics of engagement, even when her rigor led her to dispense with actors altogether. Assessing the exhibit’s symbolic installation as well as the impact of the Pompidou retrospective that accompanied it, Caroline finds inspiration in her rigorous example and welcomes her back into the present.

Contributing Editor Megan Ratner’s interview with Eugène Green, “Maximum Emotions, Minimum Words,” explores this American theatre and film director’s lifelong immersion in French language and culture. His latest film La Sapienza resolves an architect’s creative and relationship crisis through the experience of beauty, a lovely aesthetic prescription. Green reveals to Ratner his despair at the mobile phone’s invasion of the cinema screen and his preference for a single take over fifty.

Columnist Amelie Hastie, noting the remarkable women on screen this year, makes a case for Beyond the Lights and Obvious Child as emblematic of a women’s cinema that could exist once again today. Columnist Paul Julian Smith considers race politics in a Mexican setting through Crónica de castas (Chronicle of Castes) and Sangre bárbara (Barbarous Blood). And Contributing Editor Paul Thomas recalls a momentous visit with Alain Resnais on the first anniversary of his death.

As this issue headed through typesetting, news came of the deaths of several crucial and beloved figures in the field of cinema. Albert Maysles, already mentioned above, is being “honored” by the posthumous release of two documentaries he completed in the past year of his life: Iris and In Transit, both premiering in 2015. Professor, scholar, and archivist Phyllis R. Klotman, who had founded the Black Film Center/Archive at Indiana University in Bloomington more than three decades earlier and had been a force for the archiving of African-American cinema, died at the age of 90. Manuel de Oleivera, the Portugese director whose career had been revived when many others were already sealed into history books, died at the age of 106, leaving a greatly expanded filmography due to his prolific filmmaking of the last two decades of his life.

And then came news that was more personal: a Memorial was held on May 15 for the longtime Museum of Modern Art film curator Jytte Jensen, who died on March 24 at the age of only 65 after a brief but losing battle with cancer. With an M.A. in Cinema Studies from New York University, Jensen joined the MOMA staff in 1984 and remained there for more than thirty years.

Danish by birth, Greek by association, a true citizen of the world, Jensen programmed hundreds of exhibitions drawn from global cinemas while also supporting the work of New York’s avant-garde filmmakers. In 2010-12, she co-organized “Mapping Subjectivity: Experimentation in Arab Cinema from the 1960s to Now.” Her latest exhibition was devoted to Georgian cinema, which she had followed since it was still being produced under Soviet conditions. She has organized exhibitions on the films of Bela Tarr, Alexander Sokurov, Abbas Kiarostami, Pier Paolo Pasolini, and many others. Her attention to Brazilian cinema was vital in reviving that cinema for a New York audience. This writer had the honor of collaborating with Jensen on a retrospective of the work of actor Delphine Seyrig in 2002.

Passionate and energetic, Jensen always operated at a top speed that nonetheless never prevented her pausing for a laugh, a bit of gossip, or a chat with pals. Her home on the island of Andros was a stakehold in the Mediterranean that she had only begun to plumb. Cinema has lost its stalwart champion, cinephiles a true friend, festival curators a beloved colleague.