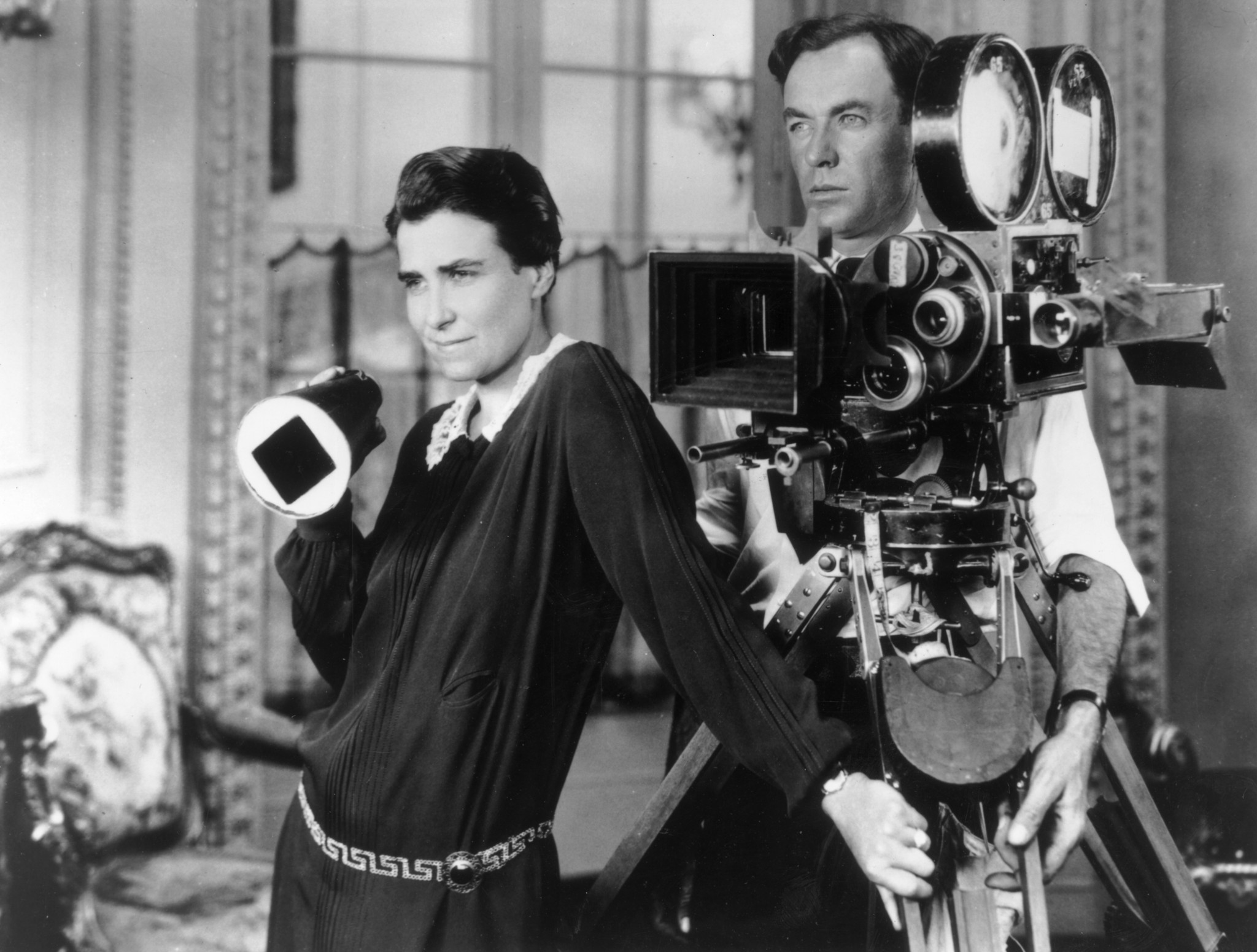 Dorothy Arzner, the only woman director to have had a successful Hollywood career during the 1920-1940s, was central to the development of feminist film studies in the 1970s. Arzner was not only an exception; as Claire Johnston and Pam Cook demonstrated at that time, she was a creative force whose films showed how the conventions of Hollywood could be subverted and critiqued.[1]

If women were typically objects of the look in most Hollywood films, Arzner’s Dance, Girl, Dance (1940) showed a female character who told the men in a vaudeville audience how she saw them.  If women were commodities, then Katherine Hepburn’s voice-over—“Now I’m shackled”— accompanying her extended arm with a bracelet from her lover was a moment of critical reflection on the courting rituals of the cinema (Christopher Strong, 1933). And if women in Hollywood films sought romance with men, then the female college students surrounding Clara Bow in The Wild Party (1929), the residents of a New York City rooming house for women in Working Girls (1931), and Arzner’s other on-screen female communities provided stunning portraits of women’s lives as they were enriched by those of other women.  Throughout the three decades since the initial rediscovery of Arzner’s legacy, the director has been the focus of film festivals in the U.S. and internationally, from Vienna to Zurich, from San Sebastian to Lyon, including the Films de femmes annual festival in Créteil, France.

Dorothy Arzner and Clara Bow during the making of The Wild Party (1929).

Jump forward to 2017.  The Cinémathèque Française in Paris announced it would present a major retrospective of Arzner’s films in March and April.  Whatever one might say about the many treasures of the Cinémathèque, one fact is incontrovertible: women film directors have never figured prominently.  Buzzfeed reported that since the opening of its new building in 2005, out of a total of 305 programs, only 22 have been devoted to women (as directors, actors, and archivists), and of those 22, only twelve were centered on women directors, with only six featuring women known as directors only, rather than actress/directors.[2]

Could the Arzner program offer a refreshing change in the Cinémathèque’s offerings, perhaps even a sign that traditional French cinephilia—which has been defined by men’s love of films made by other men featuring women who exist only to be seen—is loosening its hold on French film culture? Sadly, not. Judging by the introductory essay to the Arzner retrospective written by Philippe Garnier, old-fashioned cinephilia is still out there, kicking and screaming about women (and some men) who dare to suggest that there are ways of loving the cinema that differ from their own.[3]

While Garnier acknowledges that Arzner was a pioneer in a male-dominated industry, he downplays her achievements.  He attributes part of Arzner’s success to her knowledge of the studio system and he is impressed that, before ascending to directing, she was hired to work on “muscular” films like Blood and Sand (Fred Niblo, 1922) and The Covered Wagon (James Cruze, 1923), both films about masculine pursuits directed by men. He stresses that Arzner’s success was due in large part to her wealth (which, switching to English, he calls “Fuck You Money”) that enabled her to survive regardless of the whims of the studio system. But Garnier downplays Arzner’s significance as a film director, claiming she is not really an auteur but rather belongs to the category of “B” list directors who did the best they could with what they were handed.

Garnier’s real issue with Arzner, though, has less to do with her career and more to do with feminism and lesbianism.  Garnier speaks of “recent” efforts to make her a “secret heroine” of feminist struggle and sneers: “As one might expect, Arzner has been taken up by academics (‘gender studies’) and militant lesbians.”  Claiming that the lenses of gender and lesbianism are reductive and misinterpret the director’s work, Garnier notes that Arzner lived a quiet life with her companion, Marion Morgan, implying that her private and public lives were rigidly separate spheres. Yes, Arzner was officially in the closet. Garnier gives the distinct impression that she should have stayed there, replenishing her wardrobe with housedresses and aprons, not the tailored suits and sensible shoes of her studio photos.

Dorothy Arzner and Lucille Ball on the set of Dance, Girl, Dance (1940).

Feminist responses to Garnier’s essay were swift and scathing.  Anne-Laure Pineau and Johanna Luyssen were among those to wonder why this hostile assessment was chosen to present Arzner’s work to the public.[4]  Pineau notes that Garnier’s text undermines the retrospective. Luyssen describes it as “at the very least sexist, probably lesbophobic, and in any case, clumsy and tactless.” Manon Enghien, in a critique of the misogynist view of film history offered by the Cinémathèque, pointedly asked why, if Arzner’s wealth were of such importance, the careers of François Truffaut or Claude Chabrol, beneficiaries of their spouses’ fortunes, had not been subjected to the same scrutiny. Countering the view of feminists and “militant lesbians” as reductionist and misguided in their views of Arzner, Enghien argues that Garnier demonstrates his own blind spots as a “militant heterosexual” who sees Arzner’s films only in terms of how they offer women on display to the presumably male spectator.[5]

Johanna Luyssen examined the tweetstorm that followed the responses to Garnier, with men writing to whine about the “chick” (la greluche) who dared to take Garnier to task, the absence of male directors at the Créteil festival, and their outrage over political correctness.[6] Predictably, the Cinémathèque went on the defensive, responding with the so-obvious-it’s-trite rejoinder that cinema has always been a man’s affair and implying that critiques of this status quo are neither necessary or desirable.[7]  The Cinémathèque had to have known clearly what Garnier’s position on Arzner would be, for this was not Garnier’s first foray into attacking Arzner’s work. In 2003, when six films restored by UCLA with generous funding by Jodie Foster were screened in Los Angeles, Garnier offered a dismissive summary of their significance in the French daily Libération.[8]

I confess that I felt like a “militant lesbian” upon scanning his words a decade ago, as he characterized my book, Directed by Dorothy Arzner, as an unsuccessful attempt to read her films through a lesbian lens, and claimed that my “only interesting thesis” is that Arzner was less of a threat to men in Hollywood because of her butch appearance.  Fact check: I noted and criticized Robert Aldrich’s comment that Arzner was seen as “one of the boys” as an example of crude sexism and homophobia.[9]  In his attempt to mansplain Arzner, Garnier described her as an interesting woman but “frustrating” as an auteur, given that there is always something “off” about her films.  Plus, he says, she doesn’t seem to have a high opinion of men.

In 2017, as in 2003, Garnier dismisses Arzner’s feminist and lesbian admirers as misguided, but has little of interest to say when it comes to her films.  He acknowledges that Arzner was able to undermine the sexist premise of Craig’s Wife (1936).  He singles out Anybody’s Woman (1931) as the director’s “best,” largely because of a scene with Pansy (Ruth Chatterton) with her “thighs open, disheveled, caressing a ukulele.”

Anybody’s Woman is one of Arzner’s least-known films, and it’s far more interesting than Garnier’s flawed description suggests.  Chatterton’s appearance is delayed in the film­–­first she is heard as a disembodied voice, singing; then only her arms and calves are visible as she and her female friend (facing the camera) sit in a room, observed voyeuristically by two men in the facing apartment.  The scene of Pansy described by Garnier only appears after the men’s point-of-view is abandoned and the audience gets to see Pansy inside her room, intimately, not from afar.  It is a woman-as object-of-the-look image that is designed to displace, not glorify, a man’s point-of-view.

How unfortunate that Philippe Garnier cannot acknowledge or take seriously the possibility that there are other perspectives in the cinema than those of straight white men with more than a hint of misogyny and lesbophobia coloring their judgments. The Créteil women’s film festival was a partner in the Arzner retrospective, and their representatives asked the Cinémathèque not to publish Garnier’s introduction.[10] Clearly that request was rebuffed. Fortunately, the Créteil women’s film festival organized its own panel on the Arzner event. Further, the many responses to Garnier’s essay that have appeared and may well continue to appear make it clear that French cinéphilia is far more diverse than this most venerable institution would have one believe.