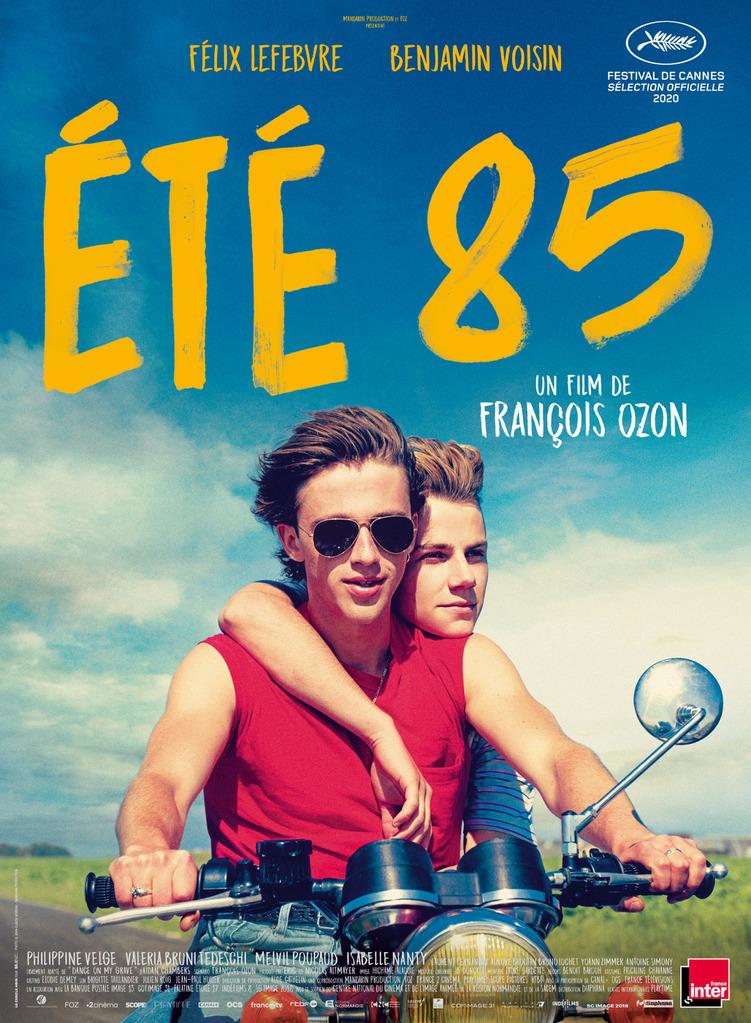 Cinemas reopened in Paris on June 22, 2020. With so many places in the world still in lockdown, this new liberty felt close to unimaginable.

Around the city, posters for François Ozon’s Eté 85 (Summer of 85) could be seen. (It was released July 14, a Bastille Day special, and was part of the official selection for Cannes 2020.) The summer colors of the poster, its sky-blue ground and yellow letters, and the image of two boys on a scooter set a new relaxed mood for cinema post-lockdown. The film itself is more frenetic and involved than the image suggests, offering what seems like an inventory of Ozon’s themes. But there is a cute connection between the male leads and Valéria Bruni Tedeschi is suitably funny.  The chance to see new films, like this one, drew me to Paris from  my home in Cambridge (UK). With advance plans to cap admissions at fifty percent of theater capacity shelved, lots of people are turning out, on summer nights, to sit for hours in the dark wearing masks.[i] The mood is jubilant.

At the Cinéma du Panthéon, the Leftbank salle which opened in 1907, and at some of the other independent cinemas, there was a short film before the main feature. Commissioned from Antonin Peretjatko by the CIP (Cinémas Indépendants de Paris) to mark the cinemas reopening, it shows two lovers communicating in code on the rooftops of a deserted Paris and films projected from the Eiffel Tower.[ii] The feature? It is Philippe Garrel’s Le Sel des larmes (The Salt of Tears, 2020) which debuted at the Berlinale and was originally due to be released in France in April. In black and white, it is about a young man going to Paris and trying to choose between three women. Like Peretjatko, Garrel is part of French cinema’s love affair with lovers in Paris. The feminist group Collages Féminicides is currently creating street art all across the city protesting gender-based violence and femicides. A feminist documentary Mon Nom est Clitoris (My Name is Clitoris) was screening at the Luminor in a showing with the directors Lisa Billuart-Monet and Daphné Leblond. Such feminist energy is only gradually making its way into French fiction films.

The cinemas, as often in Paris in the summer, have a rich program of restorations. Hou Hsiao-Hsien’s Hai shang hua (Flowers of Shanghai, 1998), which I saw at MK2 Beaubourg, was new to me: beautiful and riveting, and appropriately about indenture and confinement. A restored Jean-Luc Godard was playing each night at the Reflet Médicis theater. In Godard’s Une femme est une femme (1961), I especially enjoyed the shots of Emile (Jean-Claude Brialy) cycling around the apartment he shares with Anna Karina.

The glimpse of the reclining nude from L’Opéra Mouffe (Diary of a Pregnant Woman, 1958), screening on a television in Brialy and Karina’s apartment, was the first of several reminders of Agnès Varda, more than a year since she died.[iii] The Fondation Cartier had an exhibition on Claudia Andujar’s work with the Yanomami in Brazil, while its garden retains the longstanding Varda installation “La Cabane du chat” (Cat Cabin, 2016) and a smaller piece, “Nini sur son arbre” (Nini on her Tree, 2019) with a bronze cat sitting on a tree transplanted from Varda’s street, the rue Daguerre. In the Martine Franck exhibition at the Fondation Cartier-Bresson, there is a portrait of Varda from 1983, just her face visible behind long tendrils of ivy. A full Varda retrospective was taking place all summer at MK2 Parnasse.

I went to Paris to see new films, but the outing that more than made up for the risk and thrill of sitting close to strangers was a screening of Vittorio De Sica’s Il Giardino dei Finzi Contini (The Garden of the Finzi-Continis, 1970) which was restored in 2015 by Bologna’s L’Immagine ritrovata lab. It was playing in several cinemas, but I chose a screening at the Ecoles Cinéma Club (Ecoles 21). This is a film I had just rewatched on DVD in lockdown a few months earlier, when I had little expectation of returning to a cinema in 2020. I’m a fan of home viewing and online releasing, but seeing the Finzi-Continis in Paris gave me back cinema. In the front row – it was full – I felt the darkness like a cocoon.

It was revelatory for me. In De Sica’s close-ups, the faces of Micòl (Dominique Sanda) and Alberto (Helmut Berger) were immense, their skin like silk. The intercut shots of the palms in the botanical gardens in Rome were like dream images surfacing. But beyond this luxury was the gradual sense of the world closing in. As the Finzi-Contini family withdraws into their garden, as Giorgio (Lino Capolicchio) and his father (Romolo Valli), in Ferrara, register each new infringement of their rights and their own fragility, facing violence and terror, the film takes on an irreducible force. For the first time, after many viewings of this film, I felt a sense of the connection of all its parts, its themes of delusion, beauty, relinquishment. The huge and sublime images of an empty Ferrara at the end, as Giorgio’s father and first love Micòl and her grandmother contemplate deportation, now felt completely overwhelming.

De Sica’s reckoning with the genocide of the Jews in Italy, Claudia Andujar’s photographic testimony to the struggle of the Yanomami against disease and deforestation, even Christo and Jeanne-Claude’s wrappings and repurposings of objects and monuments at the Centre Pompidou, all carried for me a new urgency and grief when viewed in a three-dimensional space, at a time of renewed global upheaval and threat, with my long-cloistered senses heightened.

People on the streets of Paris and in its galleries and cinemas are wearing masks and using hand sterilizing gel. If they harbor fears of a second wave or rebound of the first wave, there’s also a cherishing of lost activities, not least, going to the cinema. In all the horror and catastrophe of 2020, despite a shared commitment to lockdown as crucial for humanity, I admit: I felt anxiety about the future of the fabled independent cinemas of Paris.[iv] So the magic of finding the salles thriving, and French cinephiles watching films undisturbed, was gorgeously surreal. It really feels as if Paris cinemas will survive Covid 19. There is word already of the films of la rentrée.

[i] French website Allociné.fr notes that one million spectators went to the cinema in France in the week of July 15-21, 2020. This is a third of what would have been expected before the pandemic, but reaching the one million mark was seen as significant, with numbers creeping up in the weeks that followed.  Eté 85 was the film in fourth place at the box office with 138,000 tickets sold in its first week. See: www.allocine.fr/article/fichearticle_gen_carticle=18691717.html

[ii] The short film can be seen on the Facebook page of the CIP in a post of 22 June. See also the CIP website (http://www.cip-paris.fr/cip) which lists the 28 cinemas in Paris which are part of the association.

[iv] Note that the beloved Parisian art space “La Colonie,” founded by Kader Attia and Zico Selloum, closed in June 2020 due to lack of revenue post-Covid. It is looking for donations to secure a new home (see www.leetchi.com/fr/c/rb23X8Dr).