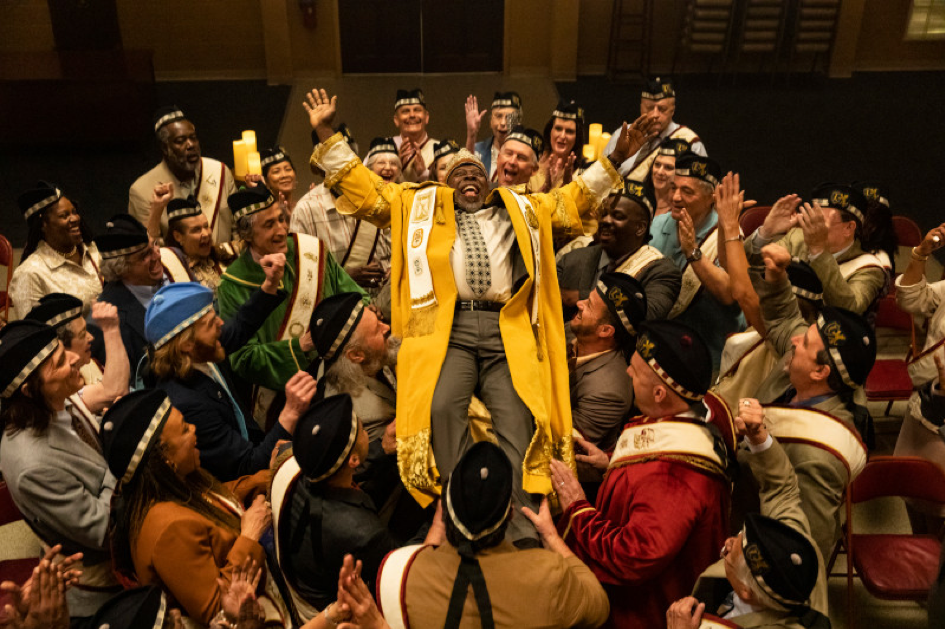 In the finale of Lodge 49 (AMC, 2018-19), long-time lodge member Ernie is crowned Sovereign Protector of the fraternal Order of the Lynx’s Long Beach outpost. The ceremony ends with Ernie, in full regalia, lifted aloft for some celebratory crowd-surfing. It’s a cathartic moment for the series characters, whose wanderings have ended with this de facto reunion. But it’s equally moving for viewers, who may recognize in the sequence’s soundtrack—The Fairport Convention’s cover of Dylan’s “I’ll Keep It with Mine”—an echo of the series philosophy: “You may search at any cost/ But for how long can you/ search for what’s not lost?” Sandy Denny sings, summing up the psychedelic quandary at the heart of the show before offering an answer: “Everybody will help you/ some people are very kind.”

It’s a phrase that could be the tagline for Lodge 49, a show that has been called “too fragile for this cruel earth.” Over the course of its two seasons, the series gently made a case for kindness and working class solidarity as the only viable response to the depredations of late capitalism, slowly building an ensemble defined as much by their downward mobility as their devotion to one other. Even more striking, however, is that this theme—of solidarity as survival strategy—has emerged as a common thread linking otherwise disparate shows within the landscape of post-recession programming. Besides the recently cancelled Lodge 49, continuing series like Russian Doll (2019—), Atlanta (2016—), and Claws (2017—) all portray worlds in which community serves as an antidote to precarity.

In short, they are essential viewing for the COVID era. These shows may come from the Before Times, but they are about the End Times. None of them, of course, concerns a global pandemic. But all of them argue for the kinds of cooperative, communitarian arrangements that, it’s clear, will be necessary for surviving the now-and-future crisis.

Russian Doll, a series of eight episodes and counting, moves its initially prickly New York protagonist toward a pro-community stance. (It was profiled in Film Quarterly by Sarah Kessler, FQ Vol.73 no. 2 Winter 2019.) In the finale, heroine Nadia—who begins the show wary of intimacy—ends by literally embracing, or at least, affectionately touching, nearly everyone she meets (“Hey! High five! You high five!”). As Nadia’s metaphysical other half, Alan, tells her in one of the show’s many timelines, “I’m convinced our true purpose is to connect with each other, if not save each other’s lives.”

The episode ends with a surreal spectacle: Nadia and Alan join a parade of drifters and gutter punks, charging through the Lower East Side against the cross-currents of time and space itself. It’s a procession that could also be a protest. It’s not incidental that the show centers around Tompkins Square, one of New York’s historic sites of political dissent. In the show, the park is also home to an anarcho-collective intent on stripping local gentrifiers of their wealth, giving the finale’s ad hoc assembly a dose of Occupy energy. Like the self-fashioned commune at the heart of Lodge 49, Russian Doll has you believing these crazy kids just might do it: create some space beyond the reach of capital.

Standing physically shoulder-to-shoulder may be less possible in the current, socially distanced moment. But the endorsement of collective care could not be more timely, as evidenced by the rapid emergence of mutual aid groups during the pandemic—not to mention the ongoing protests.

Community in these shows thus emerges as the necessary response to a status quo that, Atlanta reminds viewers, is never race-neutral. Over its previous two seasons Atlanta has underscored that, under racial capitalism, black lives don’t matter—a reality the pandemic has only laid bare. It’s not a coincidence that two of its most celebrated episodes, “Teddy Perkins” and “Woods,” recount the experience of Darius and Alfred, respectively, being attacked and terrorized by strangers. Considered independently, each of these character’s plotlines is absurd—and that’s precisely the point. The assaults they suffer may be extreme, but they’re no more nonsensical than the kinds of aggressions, micro- and macro-, the characters regularly face. When Alfred’s manager, Earn, pushes back on structural bias by hiring a black lawyer, he’s told not to bother. “Black people just don’t have the connections my cousin has,” a Jewish colleague tells him, then quickly adds, “for systemic reasons.”

Arguably one of Atlanta’s more radical achievements is the way it mobilizes serial form to advance a political critique. Like Lodge 49, Atlanta’s structure dramatizes its characters’ sense of inertia, continually disrupting both their episodic and series-long arcs. The deus ex machina may take surreal shape, manifesting such figures as the madman who blindsides Alfred in the woods and the Craigslist seller who, Darius discovers, is in fact a deranged former celebrity turned killer. At other times, the obstacle is far more banal, as when Alfred is waylaid by a wily barber while Earn wastes a day on a lost jacket.

This cumulative loss of narrative agency is just one way of telegraphing the characters’ broader disenfranchisement. Again and again, Atlanta insists on the outsized role of external forces—as opposed to the personal failings that afflict most prestige TV protagonists—in determining its characters’ trajectories. Indeed, it’s revealing that many of the show’s best episodes are all digression. It’s hard to maintain forward momentum, it turns out, when you’re continually being called to work, to pick up your kid, to post bail.

In this light, what’s initially presented as an almost haphazard bond between main characters Earn, Alfred, and Darius—one cemented by smoking weed together on a discarded couch—is gradually revealed to be a more serious alliance: the sole safety net available. As Alfred tells Earn, “You my family, Earn. You’re the only one that knows what I’m about.”

There’s a similar logic at work in the otherwise radically distinct Claws, a series whose all-female, multiracial ensemble embraces ride-or-die camaraderie as a primary means of self-defense. It may sound Kumbaya-ish to suggest that a main takeaway from a subset of recent TV is “only connect.” But these series ground their aspirational messages in material reality.

Nearly every character in Lodge 49, for instance, is a casualty of a dead or dying industry: a de-commissioned aeronautical plant, a bankrupt corporation, a local newspaper. And most, in debt to banks or the resident pawnbroker, find their way to the staffing agency TempJoy—realizing, as the show’s Marxist truth-teller puts it, that “temps are the only ones with job security.” It’s a joke that sounds even less funny as entire industries are gutted and unemployment in the U.S. surpasses rates last seen during the Great Depression.

TV, of course, doesn’t have a lock on anti-capitalist critique. In the last two years, films such as Sorry to Bother You (Boots Riley, 2018), The Last Black Man in San Francisco (Joe Talbot, 2019), and the Oscar-winning Parasite (Bong Joon-ho, 2019) have won mainstream praise for tales of class warfare. But feature-length films don’t have the same luxury of time as serial television—or the same ability to pull punches, to let viewers sit with the possibility that, as Earn puts it in Atlanta, “money is just an idea.”

Conversely, there’s no shortage of current TV shows offering refuge from such ideas. Consider how The Great British Bake Off became the go-to treatment for political malaise after the 2016 election, as parodied by the Canadian sketch comedy show, Baroness von Sketch. (In the sketch, a therapist prescribes the show to a client anxious about having to live through “the garbage times.”) Watching a diverse group of strangers treat each other politely while preparing baked goods can evidently offset the toxicities of Trump-era America.

Since the lockdown, the endless lists of “what to watch” while you’re stuck at home have privileged media maximized for comfort. Of course, there’s nothing wrong with taking your pleasures where you can. And as media scholars have begun to consider, there may be positive outcomes to the ongoing experiment in watching “together-while-alone.”  But there’s also much to be said for less comforting, more discomfiting TV—shows from Russian Doll to The Good Place that portray kindness as a tactic, not an anaesthetic, something to be imitated, not simply enjoyed.

It’s as if only in the late 2010s did television finally realize, as Parasite director Bong Joon-ho put it, that “we all live in the same country … called capitalism.” The Coronavirus, of course, has only further collapsed borders, racing around the globe with the speed of the train in Bong’s Snowpiercer (2013)—another pro-solidarity text whose TV adaptation just had its timely debut.

It’s worth asking whether this “new ethical television” will prompt rethinking about the parameters and potential of post-network programming. If much of the original canon of “Quality” TV—The Sopranos, Breaking Bad, Mad Men—emphasized the anti-heroics of dysfunctional white men, this current wave of shows is distinguished by more and more diverse protagonists, invested in the public good as well as their own private gain. Tony recognized, in The Sopranos 1999 series premiere, that “things are trending downward.” But only now, twenty years later, are characters trying to do something about it.