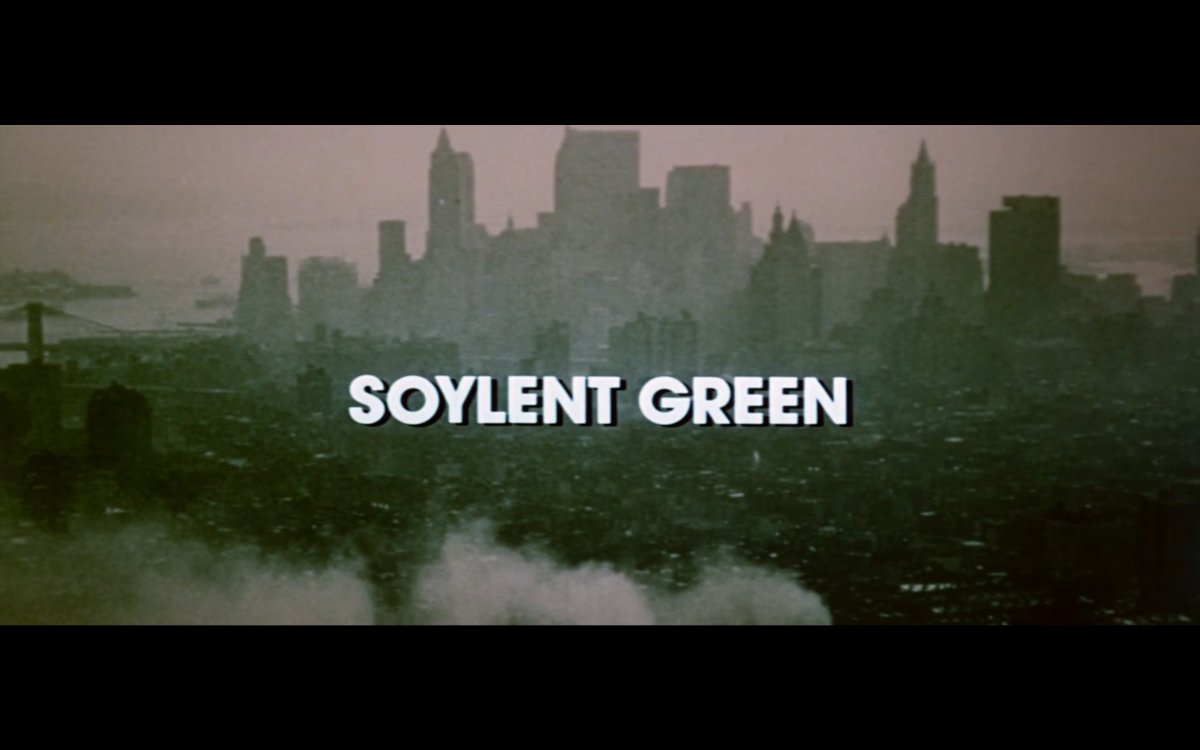 Soylent Green (1973), the cult classic starring Charlton Heston, is set in what was then the distant future: the year 2022. While the film inevitably gets many things wrong, it also gets something dead right. The uncanny (un)timeliness of the film is profoundly disturbing while at the same time deeply gratifying, as if hearing a voice from the past tell you that your daily anxiety about capitalism-induced climate chaos is not only well justified, it has actually been anticipated for some time.

As Hollywood attempts, in its way, to take on the climate crisis, with films like The Day After Tomorrow (Roland Emmerich, 2004) or the more recent Don’t Look Up (Adam McKay, 2021), one tends to forget that it is a long-popular theme. In fact, Soylent Green is one of two films released 50 years ago—the other was Z.P.G. (Michael Campus, 1972)—that centered overpopulation, a problematic emphasis that has been critiqued by feminists and anti-racists since that time. While those films have been largely forgotten, the more recent ones have been received with great fanfare, especially The Day After Tomorrow, which has been credited with helping change perceptions about climate change, especially in the US. In fact, I would argue that The Day After Tomorrow and Don’t Look Up pale in comparison to Soylent Green in terms of urgency and clarity of their message.

Soylent Green never hit as big as some other sci-fi films of the era like 2001 (Stanley Kubrick, 1968) or Alien (Ridley Scott, 1979) and perhaps for good reason. Despite some A-list actors (Charlton Heston in the lead role of Thorn, an illiterate and corrupt cop with a heart of gold, and Edward G. Robinson as his aging sidekick, Sol Roth, in the final role of his career), the special effects alone signal a B-grade movie. The orange-hued ketchup blood and the souped-up garbage trucks, outfitted with fearsome long-toothed front hoes, give away the film’s tight budget, as does the extremely low-tech futurism. But this film should not be dismissed as a flop or even as low-brow ‘trash.’

Soylent Green didn’t become a cult favorite for nothing. It was received with mixed reviews upon release, with critics mostly noting that Heston’s acting had improved (a fact to which I was insensible) or the powerful effect of watching Edward G. Robinson enact his own death. (In reality, he died barely a week after shooting wrapped.) Some critics remarked upon the entertainment value of the film and one critic, Penelope Gilliatt of the New Yorker, expressed outright exasperation with regard to the passivity of both the women and the poor depicted by the film, with which I can only heartily agree.

What none of the critics writing in 1973 could have foreseen, however, is the near prophetic view of the absolute callousness of late capitalism wherein profit and the enrichment of the few reign supreme. The idea that corporations will stop at nothing to maintain their profits may not have been unknown in 1973, but it surely hadn’t been instantiated as thoroughly as it has since the fall in 1988–1991 of the other counterbalancing superpower and its anti-capitalist forces.

In the film, the main crisis that drives the plot is overpopulation leading to significant food shortages. It is a crisis that resonates powerfully today, when the incipient destruction of an habitable atmosphere has become the world’s main focus. What remains high on the list of concerns is the question of food, namely how to feed a planet full of people when the climate has become unpredictable and many industrial solutions developed over centuries of imperialist and capitalist exploitation (monocropping, overcoming ‘seasonality’ with complex global supply chains) are responsible for straining the planetary resources even further.

Charles Braverman’s two and a half minute documentary montage that opens the film is a revelation in and of itself and worthy of sustained analysis. Beginning with sepia images of early American settlers, the montage unwittingly apportions blame correctly to the white settler colonists for the maddening pace of industrialization and the demise of any balanced and respectful relationship with the lived environment. The montage quickly accelerates from its proto-Ken Burns Effect zooms and pulls to a frenzied barrage of cuts and dissolves with some nifty split screen effects that could not have been simple to produce at the time. Comprised exclusively of stills, it manages to convey the dizzying pace of development and its often unnoticed effects. Highways are choked with cars, factory chimneys belch black smoke, people crowd the streets in all reaches of the globe, as mountains of junked cars threaten to overtake the frame and garbage piles up in every corner. The sequence ends with the title of the film, quickly supplanted by the following information: The year: 2022; the place: New York City; the population: 40,000,000. The main problematic of the film is meant to be overpopulation, but the montage tells a more complicated story that indicates how climate chaos was already showing its distorted, tortuous, effects. There is even a frame that hints at corporate responsibility with a sliver of Esso’s logo visible, and another frame that tellingly has the word “American” emblazoned on a massive wrecking ball.

The American Film Institute lists Soylent Green in 77th place for most quoted line of dialogue—“Soylent Green is people!” Soylent, in the film, is a corporation producing food substitutes, and soylent green is one of their popular varieties of nutrition wafers. Originally intending to produce it using plankton, the company looks for an alternative source given a world in which oceans are dying. In 2014 someone thought so well of this film that they named their meal replacement product “soylent,” presumably in the belief that the film was so obscure that no one would realize the irony.

Indeed, the only people who appear to be returning to this film in 2022 are conservative film critics and film nerds. Wesley Smith, writing for the National Review feels compelled to preface his comments about the film’s prescience with regard to climate change by opining that “if I hadn’t known when the movie was made, I might have mistaken these introductory images for an Al Gore–produced advocacy clip” or “whatever one thinks of anthropogenic climate change this film gets it right.” Tony Sokol writing for Den of Geek, is dismayed by the all too real fact of meat substitutes and seems to liken them to the wafers in Soylent Green. What those returning to the film in 2022 seem to agree upon is that it hits the nail of climate change right on its proverbial head. In fact, I might add that the focus on climate as the driver of change is more forthrightly posited in this film than in any popular genre film on the topic that I have seen.

The film is no masterpiece to be sure, and there is plenty at which one may take offense. For example, all of the women, with the exception of the head book authority of the “Supreme Exchange”, are literally referred to as “furniture,” and are sold along with the lease in wealthy apartment buildings. They are essentially sex slaves for the rich, and while this is clearly meant to represent a dystopian world, the lives of rich men are portrayed as enviable. Alongside this obviously demeaning trophy sexism comes gratuitous racism: Thorn’s boss, who caves in to the pressures of corrupt senators, is Black.

Still, this film harbors an uncommonly clear message about climate change, overpopulation and over-consumption that is significantly watered down in more recent ‘cli-fi’ films. Heston’s last words in Soylent Green issue a demand: “We must stop them.” This collective call to action is precisely what is missing from later attempts, such as The Day After Tomorrow and Don’t Look Up, to bring popular cinema into the realm of cultural critique. Further, what all three of these films prove, sadly, is the inadequacy of popular commercial cinema to catalyze the necessary response to such a crisis. The effective cultural critique, which Soylent Green had the potential to be, The Day After Tomorrow pretended to be, and which  Don’t Look Up promised to be, is all too easily subsumed into grist for the entertainment mill, feeding the spectator the activist equivalent of soylent green wafers—“tasteless, odorless, crud”—unable to satisfy anything but the most basic individualist needs and most certainly incapable of nourishing and energizing the bold collective action necessary. Still, there is something to be said for a voice from nearly fifty years in the past speaking directly and viscerally to everyone’s deepest fears in the present.

Alisa Lebow is Professor of Screen Media at University of Sussex. She has published widely on documentary and experimental film and her focus has increasingly shifted toward climate and cinema. She won the 2020 SCMS Anne Friedberg Award for Innovative Scholarship with her project Filming Revolution (www.filmingrevolution.org).