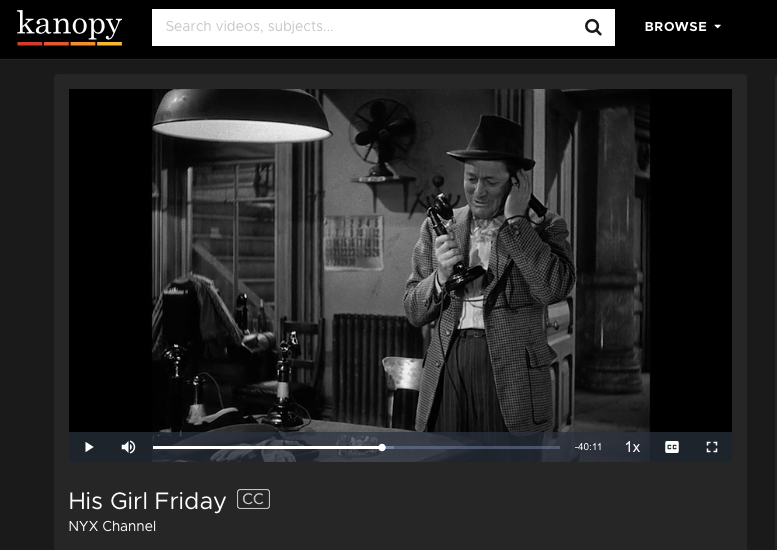 Kanopy, a streaming service that had long catered quietly to the educational market, began to appear in late 2017 and early 2018 in stories in prominent news outlets with headlines that emphasized its role as a free streaming service: “How to Stream Thousands of Free Movies Using Your Library Card,” “The Best (Free) Streaming Service You’ve Never Heard Of,” or more blatantly, “Meet Kanopy, the Streaming Service That’s Just like Netflix, Only Free.” [1]

The timing was no coincidence. It was the result of Kanopy’s roll-out to the public library market and of a press-release blitz aided by the many public libraries that had signed up for Kanopy. The marketing campaign was timely, concurrent with the waning of classic film libraries on the major streaming services, as Netflix prioritized television. The broader on-demand mediascape had seemingly retreated from classic and niche films, and Kanopy addressed this gap. [2]

For all its benefits, though, Kanopy is not free. Some news articles state more precisely that library users watch films for free, but of course the library pays for the service. A fee for the service is not in itself a surprise or a problem: Kanopy has a lot of good content and their offerings include foreign films, older films, independent features, documentaries, and experimental work that other widely available streaming platforms have historically lacked. However, Kanopy is not just like Netflix, or any other subscription video on demand service (SVOD), even if its innovation is applying a Netflix-style user-friendly platform to the library market. As much as Kanopy cultivates this confusion in the user’s mind, its website’s economic model works very differently from subscription streaming sites, and these differences have an impact, especially in higher education. Particularly as newer, distributor-run streaming services like Criterion Channel and OVID start up, it is worth highlighting how Kanopy operates in a fundamentally different way.

Recently, an increasing number of scholars have become aware of a simple fact about the service: university and college libraries do not pay a flat fee like individuals might for Netflix, Hulu, or the (now defunct) FilmStruck. Instead, Kanopy’s platform drives “patron-driven acquisition” in which three viewings (defined as 30 seconds or more of a title) trigger a library license fee per title. (The figures I’ve seen are $150 for a year, $350 for a 3-year license, though the price might vary or change over time.)

Those fees can add up quickly, and some libraries have felt a strain on their budgets. For instance, Stanford University called Kanopy’s cost “no longer sustainable” as they announced their switch from an open-platform version to a limited-access, request-only version (the only way libraries can turn off the license fee trigger of patron-driven acquisition). [3] However, these issues do not affect public libraries, which pay Kanopy per view (current fee of $2), similar to a transaction video on demand (TVOD) service like iTunes. [4] Still, patrons do their local public library’s budget no favors by streaming the “free” Kanopy titles, even if those libraries presumably factor in the streaming costs as part of their mission.

The average media consumer, accustomed to a $13 Netflix monthly subscription or a $20 Blu-Ray, might be shocked at Kanopy’s education-market price of $150 per film. However, Kanopy did not invent the disparity. Since the advent of the VCR, there has been a split between personal-use and educational pricing. What Kanopy is actually doing is providing a subscription-like experience for a video market driven by per-title educational (not individual subscription) pricing.

For instance, a DVD of Julie Dash’s Illusions costs about $20 for home personal use but $275 for universities to purchase. There are two main reasons for this disparity. First, educational pricing sometimes includes public-performance rights. While U.S. copyright allows classroom screening without such rights, distributors ask for payment for any public screenings that may take place outside the classroom. [5] Second, and more crucially, universities and colleges are the primary market for many works, especially documentaries, experimental films, or video art works.

Some distributors like Electronic Arts Intermix or Torch Films sell exclusively at the educational price, whereas others including Zipporah Films, Women Make Movies, or the Video Data Bank sell some films on a limited basis at a home-video price while charging much more to educational institutions. Distributors with crossover titles, such as Kino Lorber, First Run, and Icarus, release some films in a general home video release but restrict certain films for educational pricing.

The positive side of educational pricing is that more money per unit goes to the filmmaker, even as the distributor gets a percentage, too. The negative side is that it prices many films out of the reach of many potential viewers. (Even research libraries have budget constraints.) Might distributors be better off pricing their films lower to get wider distribution? Perhaps, but they have a plan based on their long experience with the market. Niche distributors, including distributors of many of the canonical films that scholars study or teach, are wary of cannibalizing the educational market with cheaper home video; for major studios, though, universities are only a small fraction of their distribution. For example, the wide release of Pioneers: First Women Filmmakers from Kino Lorber or a Chantal Akerman box set from Icarus or Criterion allows more DVDs and BluRays to be sold but also undoubtedly eats into a lucrative educational market. (It should be noted that major studio films, often handled through distributors like Swank Motion Pictures, are also more expensive when priced for public performance and educational streaming.)

However, the economic and cultural changes brought by Netflix and Kanopy have encouraged niche distributors to consider adopting streaming initiatives aimed at personal use. The Criterion Collection has long been aimed toward the home-video market and accordingly has had a sustained involvement with streaming, first with Hulu, then as part of a partnership with Turner Classic Movies (TCM) for FilmStruck. The demise of FilmStruck, driven by Warner Media’s declining commitment to niche distribution, led Criterion to start a self-standing Criterion Channel modeled after FilmStruck, curated around themes, periods and auteurs and supplementing films in the Janus/Criterion collection with other repertory titles. With coincidental timing, Docuseek, a streaming platform geared toward and priced for the educational market, created OVID.tv for the personal market. OVID combines documentary and art-house fiction offerings from Icarus, First Run, Grasshopper Film, Women Make Movies, KimStim, Distrib Films, and Bullfrog Films into a subscription video on demamd (SVOD) service. These new services will enter a marketplace competing with existing cinephile streaming site MUBI as well as more niche on-demand services like DocAlliance. I see the model of distributor-run streaming sites to be a positive development, even if it remains to be seen how viable or popular they will become.

In all, Kanopy is a mixed blessing. For those who teach cinema, it addresses some limitations of physical media—but at a cost. Universities may curtail screening time for classes, or libraries may not have adequate facilities for DVD or Blu-Ray viewing, especially for a large-enrollment class. However, there is the very real matter of student culture: students are more likely to stream films and may even lack devices to play back physical media. For niche distributors and independent filmmakers, streaming websites – not just Kanopy but also other educational market platforms like Films on Demand, Docuseek, or Alexander Street – can now offer expanded audiences and continued revenue.

At the same time, streaming fees eat into library budgets for physical media acquisitions. DVDs and BluRay discs last far longer than temporary streaming licenses. Further, others have pointed out to me how content on Kanopy can be mislabeled or of poor quality. The uneven content affects public-library users of Kanopy, too, as do wider general concerns about data privacy. [6] I wonder, as well, if Kanopy is serving the independent distributor well, since pricing does not vary per title (a cheap public domain film gets the same fee as an expensively restored version) and since Kanopy takes a cut (probably at least 30%), like other content aggregators.

Ultimately, the decision around Kanopy or other streaming websites lies with the libraries. But it might be wise for film scholars housed at higher-education institutions to be aware of the pricing constraints that streaming services place on their university libraries’ overall acquisitions. I do not intend to paint Kanopy as the bad guy in the story of streaming access – the company has brought an innovation to an underserved marketplace, added convenience, and expanded the audience for many films – but as an educator, film scholar, and general cinephile, I am particularly sensitive to the imperative to support physical media and independent distributors, and remain committed to searching out streaming alternatives featuring independent content, even for my personal use. It will be to the benefit of independent and niche cinema – experimental works, documentaries, and art films – if independent distributors are able to find a sustainable business model and navigate both the budgetary crunch that higher-education institutions are facing and the wider marketplace for on-demand cinema. The oligopolistic market has accustomed users to cheap or “free” content, but there are losers in that order of things.

This article began its life on Twitter and I would like to acknowledge the initial feedback that I’ve incorporated since, including from Kate Rennebohm, Paul McEwan, and Martin Johnson.

[4] See for instance, the service contract between The City of Austin and Kanopy, December 7, 2017, Exhibit A, http://www.austintexas.gov/edims/document.cfm?id=310429.

This article has been updated with corrections to the original.