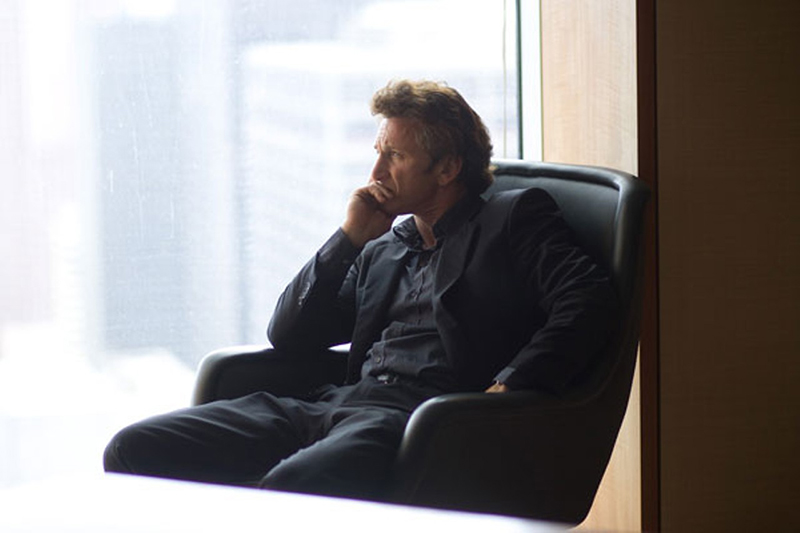 Voices are heard in Film Socialisme but often the speaker is not seen; conversations are decontextualized to the point of absurdity. The line between epigrammatic and nonsensical is impossible to draw. At one moment in the middle segment, which takes place in a family-run Swiss gas station, a boy touches his mother’s face and (possibly quoting some obscure Surrealist poem) asks enigmatically about her myriad eyes staring in the night. In the long opening section, set on a huge Mediterranean cruise ship, characters talk disconnectedly about World War II and gold-smuggling, as if trying to piece together half-forgotten conspiracy theories. (Any viewer of Jean-Luc Godard’s latest who does not understand French must rely on the director’s “Navajo subtitles,” which intensify the effect of fragmentation despite being roughly accurate partial translations of the dialogue.) It is an understatement to say that this is a difficult film; it is frequently impossible to understand. In Film Socialisme common knowledge has disappeared. Everything is in code. In one shot, a child stencils hieroglyphics below a novel entitled Akhenaten the Renegade, naming the monotheistic Pharaoh whose reign was forgotten for centuries. Perhaps Godard sees a similar process of historical erasure happening today.

Film Socialisme emphasizes disintegration graphically and photographically. There are, firstly, the doggerel subtitles with their strange compound words: “empire ortourism,” “anyone maydo nogod,” “digdeep Communist archives.” Secondly, numerous onscreen cameras together with multiple variations in the texture of the image—gorgeous HD vistas, CCTV, refilmed material, clips from 35mm cinema, shots with computer-adjusted color saturation—draw attention to mediation and technological distortion. At one point a shot abruptly freezes in the manner of streaming video interrupted by signal dropout. Thirdly, the film’s powerfully elegiac final section uses slow dissolves and superimpositions so that images are internally split in two. Visual form is given to the somber contention, enunciated in voiceover, that European history began with disastrous nuptials: “Alas, democracy and tragedy were married in the Athens of Pericles and Sophocles. An only child: civil war.” This idea of endless intimate conflict can just as well describe Jean-Luc Godard’s inscrutable palimpsest.

The Tree of Life is a masterpiece of ambiguity. Similar to Michael Haneke’s The White Ribbon, Terrence Malick’s film persistently plays with audience preconceptions about power in order, I think, to develop the theme of subtle, disguised manipulation.

Consider the much-discussed dinosaur sequence: a predator tramples on the face of a smaller creature that may have been trying to hide by lying flat on the riverbank. The larger animal pauses, relaxes, moves away. If we are to psychologize this scene, is it certain that we should infer compassion or at least forbearance? I hesitated. For a while I thought that the scene could just as easily be said to represent humiliation, an act of restraint whose purpose is to enact domination that continues into the future. I connected this prehistoric encounter to the later garden conversation between Mr. O’Brien and his eldest son Jack when the boy acknowledges his father’s authority, a meeting that can arguably be understood in terms of subjugation rather than benevolence. Yet I then turned again, dispensing with the binary of supremacy and subordination. Might it be a matter of reciprocity rather than hierarchy? Do these scenes both depict complicity?

Speaking of power-sharing, each time I watched The Tree of Life, Mr. O’Brien—failed musician and lover of Brahms, patent-owner and advocate of entrepreneurial self-sufficiency, occasional stickler—seemed kinder and less fearsome. His ineffectiveness as a disciplinarian becomes increasingly apparent: he is too fond of kisses and on the one occasion when he shows real anger he ends up sitting morosely alone at the supper table. Later he tries to blame his wife for his outburst: “You turn my own kids against me. You undermine everything I do.” He puts his arms around her; she resists, very upset, but then relents, and the tightly framed image of their briefly struggling arms encapsulates the success of their marriage and the depth of their intimacy. His allegation is farfetched but it contains a measure of truth: her quiet, tender, unpunishing rapport with the three boys is a very strong kind of influence. And it is one that stretches beyond the confines of fictionalized Waco. For, on a first viewing at least, Mrs. O’Brien’s dreamy mystical musings (“love everyone, every leaf, every ray of light”) seem to preside over the film’s cosmic and zoological sequences.

Yet is she truly the chief personality? Who is The Tree of Life‘s storyteller, its presumed central consciousness? The answer must surely be that it is grownup Jack, played by Sean Penn. Sharp-suited and dour, he is like a character from The Fountainhead with a penchant for self-help ideas (“I feel like I’m bumping into walls,” he says early on). In a late scene this affluent, middle-aged corporate architect steps through a doorframe incongruously erected in the desert and I speculated that he has gone to an expensive holistic retreat for arcane, stepping-across-thresholds therapy. This interpretation would make sense of some otherwise baffling aspects of the film’s closing section: Jack’s excursion with his younger self and, in particular, the fact that on the heavenly beach where the entire O’Brien family and their Waco neighbors congregate again Jack has grown older at a different rate than everyone else. But if he is indeed our storyteller, then the possibility arises that we have been watching not flashbacks supplemented by picturesque widescreen homilies, but the neurotic, oceanically narcissistic, and delirious fantasies of a man suffering midlife breakdown.

Maybe it is worse than neurosis. During a sermon about Job, the local Texas preacher poses an ominous question: “Is there some fraud in the scheme of the universe?” (Shortly afterwards, Mr. O’Brien adds: “the world lives by trickery.”) From time to time sinister images corrupt the world of The Tree of Life as if to make that fraud known. The most obvious is the mosquito-control truck that sprays pretty clouds of DDT over cavorting boys, but there is also an inserted illustration of a praying mantis; a freaky underwater sequence featuring pulsating vegetal globs as well as bizarre screw-shaped organisms that whizz in the direction of the surface; two shrouded corpses on the outskirts of a scorched pueblo; a carnival mask cast into the sea. What are we to make of these horrible apparitions?

Eventually I pondered another interpretation of the dinosaur sequence—that in some way the prostrate beast has power over its seeming oppressor. In one of the Waco scenes, Mr. O’Brien is playing the piano while his second son is sitting on the porch accompanying on guitar. Beyond them, tracing a peripheral ring around the house, is young Jack, his face cold and resentful. In narrative terms too it is Jack who is outermost to the film, orchestrating or imagining it. In the last shot of him a blankly malign expression has returned to his adult visage and finally it occurred to me that the sinister images are not aberrations—that The Tree of Life is the devil’s own fiction.